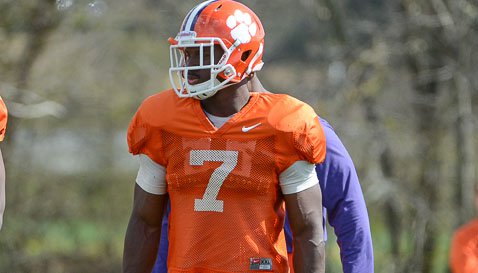 Will 2014 be the year that Clemson fans get to see the real Tony Steward?

Tony Steward
Sr. Linebacker
#7 6-0, 235
Hastings, FL
View Full Profile realizes that his time at Clemson is running out, and with a final year of eligibility staring him in the face, he wants to make the most of the opportunity he has this season.

Part of that, by his own admission, is tearing up opposing offenses.

In other words, he feels like this is his time.

“It’s been a pretty tough journey,” Steward told TigerNet after Monday’s practice. “But you have to weather the storm, you know? Whether this time is my time or somebody else’s time, I am just lucky to be here and enjoying my opportunity. I want to make the most of it. Hopefully, I can make it my time.”

Steward has had to not only deal with the injury factor during his short career, but has also had to deal with a backup, something he wasn’t used to in high school. Now, the injuries have healed and he is ready to put the frustration of being a bench player in the past.

“I don’t feel any affects at all from my previous knee injuries. Your legs get tired from time time, but nothing from injury is there,” he said. “It is completely gone. There is no pain in turning, cutting, changing direction or anything. It is playing football. Being a backup, you are always going to be a little frustrated with your playing time. But I don’t think it’s been anything too terribly tough. I’ve been able to deal with it.”

He then said that he wants his Clemson career to be remembered for more than just being a good special teams player.

Stephone Anthony
Sr. Linebacker
#42 6-2, 235
Polkton, NC
View Full Profile were two of the big names in the 2011 recruiting class, and the expectation was that the two would be a terror on opposing offense. That hasn’t happened as Anthony has logged over 1200 more snaps than his classmate.

That, hopefully, is about to change, and Steward can’t wait to finally take the field beside Anthony.

“Man, it is awesome. I have been waiting a long time to play beside Stephone,” he said. “I am excited to get out there on the field next to him and just let it loose and tear up offenses. This is my last go-around, and I want to make the most of it. I just have to have a go-for-broke attitude and mentality and do whatever it takes. Whether that is coming in and do extra film training or do things outside of practice. I mean, time is running out. You don’t have an entire lifetime.”