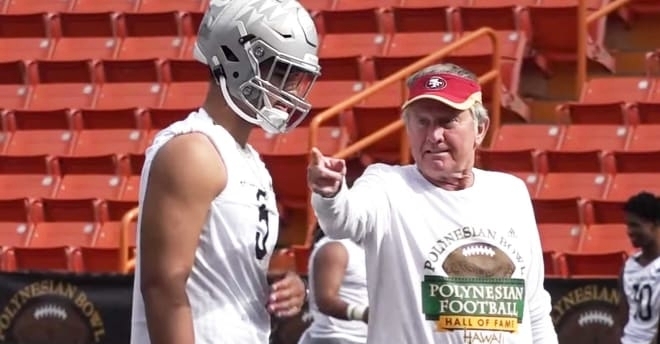 Not every young quarterback gets a little one-on-one time with the Head Ball Coach, but Clemson quarterback D.J. Uiagalelei did just that last week. Longtime Florida and South Carolina head coach Steve Spurrier was one of the coaches on Uiagalelei’s team at the Polynesian Bowl in Hawaii and coached the Tigers’ 2020 quarterback mid-year enrollee.

Spurrier has won a national championship as a college coach, leading Florida to the national title in 1996. He was also the 1966 Heisman Trophy winner (at Florida) and last year won a championship as a professional coach, leading the Orlando Apollos to a 7-1 record in a shortened season and leading Spurrier to claim (and Vegas backed him up) that they should be the AAF regular-season champions.

“He's a talented kid, now I'm telling you. All of those young men with Polynesian background, they're good, loyal family guys,” Spurrier told TigerNet. “They have a strong faith. He got up and thanked the Lord for giving him the ability to win an award he received at dinner. Tua (Tagovailoa) was there also getting an award. It was a fun week out there. We really enjoyed it. Somehow or another we won the game 20-13. D.J. had a 3rd-and-10 and hit a nice little out-cut on the money that kept the drive going and we went on down and scored. It was a fun week out there.”

Spurrier didn’t know a lot about Uiagalelei until mid-week.

“It was pretty new. I had heard a little bit about him. He didn't get there till Wednesday,” Spurrier said. “He went to the national championship game and he's already enrolled in school. He was eligible to practice with the team, which I guess he did and after the national championship game, he flew out. I only had a couple of practices with him so what I did is I ran in the plays with each of the quarterbacks, so we rotated them in and out. It wasn't easy for him to remember the words I was giving him because it was a bunch of new words for him for the formation and the pass or run play. We got it down pretty well.”

Spurrier said Uiagalelei will be “the guy” at Clemson after Trevor Lawrence leaves.

“He's a talented young man. He's got excellent arm strength. He can make all of the throws. The ball comes out of his hand with a nice spin. He's got God-given ability to throw the ball, that's for sure. During the game, he let a couple of hard, high ones go, but he threw some beautiful passes also,” Spurrier said. “He can run the ball. I've got a good feeling that after one year - after Trevor Lawrence leaves - he'll be the guy. I don't know who else they have there but one year of work - he's a young man that will work extremely hard to be the best he can be. I think Dabo's got him another good one on the way.

“What was good, also, is he was willing to play another position. We had three quarterbacks out there and I'm trying to think, how am I going to play all three of these guys? We rotated all three of them in the first half, then one of the young guys said his shoulder was a little stiff and wasn't sure if he should play the second half. The other guy and D.J. ended up rotating the whole second half.”

Spurrier also weighed in on Clemson’s recent loss to LSU in the National Championship, saying that head coach Dabo Swinney will have another great team next year.

“He'll be fine. I think I even heard him say that we'll actually be a better team next year because we don't lose but very few guys and have guys who should continue to improve and so forth,” Spurrier said. “They'll be in good shape. I know it's disappointing but, gee, you can't win all of those. As a coach, I was in two national championship games and won one-out-of-two and I said, I'll take that. I would've loved to have gone two-for-two. I think Urban Meyer was three-for-three. He had a knack of winning them when he got to them. My good friend Bobby Stoops was only one-for-four. The Buffalo Bills and the Minnesota Vikings are oh-for-four. If you go two-for-four, that's not bad. 50-percent is not bad at all.”