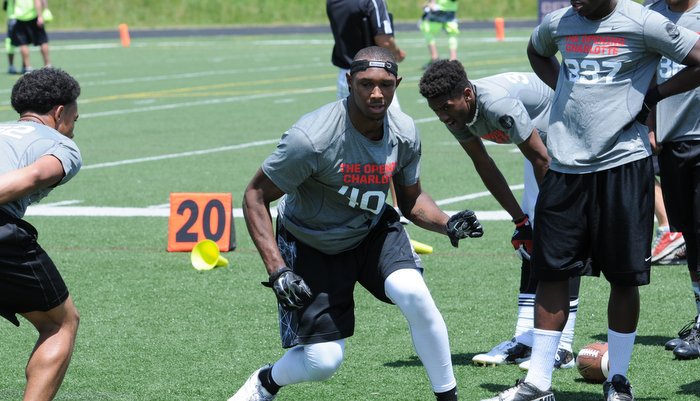 Stephen Davis, Jr. has been committed to Auburn since last August, but after taking several visits and seeing the number of defensive backs Auburn has recruited for 2016, the 4-star defensive back is starting to have second thoughts.

TigerNet caught up with the Irmo (SC) Dutch Fork defensive back at Mallard Creek High School and Davis (6-3, 215) said that the unexpected trip to Clemson for the annual Orange and White game really opened his eyes to what Clemson has to offer.

"It surprised me a lot. I didn't realize that Clemson was that pretty," Davis told TigerNet. "It was just good. I had a great time and it's something that I look forward to going back and watching a game."

It was Venables - Clemson's defensive coordinator - who finally convinced Davis to give Clemson a look.

"Me and Coach Venables have been talking for a long time and I just wanted to get to know what the Clemson campus is like and just have a fun time getting to know what the Clemson coaches are like," Davis said. "They are very big on education and that's what I like. It was something that surprised me, honestly. They've been recruiting me since I was in the eighth grade and I never got a chance to visit Clemson until a few weeks ago. I had fun."

Davis said that Venables told him he would fit in well on the back end of Clemson's defense, possibly taking over for Jayron Kearse who can declare for the NFL Draft after the 2015 season.

"I would play safety. They have tall safeties there," he said. "I like the way they run their defense. He thinks that I could fit in their defense and be a ball hawk."

Davis is also looking at Florida State, UCLA and South Carolina and said that he's looking for two things in his future school.

"If they have the major I want. It's not all about football because it's not always going to be there. I'm going to have to fall back on something else," he said. "Education, most definitely. I want to go into law enforcement. When I was little I was always watching CSI Miami, Law & Order and CSI New York. I'm just really into that. I like the way it works and I'm improving in it because I'm studying it in school right now. The player's relationship with the coaches is also important and that's any school, period."

When Davis starts taking his official visits, Death Valley will be one his first stops.

"Yes, definitely for a game. The Clemson spring game was live and I really had fun, but I just imagine what a real game is like," he said.

Davis helped lead the Dutch Fork Silver Foxes to the South Carolina AAAA Division I championship game a season ago and registered over 60 tackles and an interception during his junior campaign.