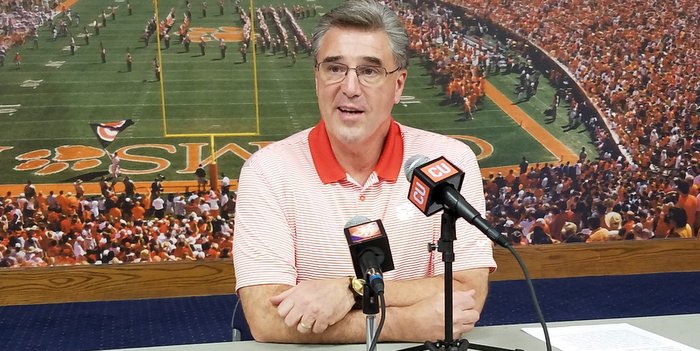 Radakovich meets with the media Friday

CLEMSON – Director of Athletics Dan Radakovich met with selected members of the media Friday afternoon, and he covered a wide variety of topics in his season-opening state of the union address.

Radakovich met with the media in the McFadden Team Room and started out by covering the past the year and looking into the future.

“We have started 2016 and 2017 academic year. We had a really good year last year - football and soccer play for national championships, and we had three ACC Championships as well. We also had a fifth-place in the Capital One Cup for our men's sports, which we're very, very proud of. It's the highest we've ever done. We are also proud of what our student-athletes did in the classroom. We had a record year as it relates to APR and GSR and a number of teams set personal bests as it relates to GPA's either during the fall or spring semester.

“IPTAY also had a record year, annual fund numbers over $29 million dollars total gifts, and $56.1 million in cash and pledges. So that's great. You put the last two years together, and they're near $120 million in in the last two years that they've raised. And to top off the year Briana Rollins won a gold medal, and hopefully, she'll stop by here soon so we can recognize her.

“We've sold more football tickets than we have before, and with Littlejohn, we sold more than we did the last year that we were there. Right now the seat selection is going on and by all accounts that's been really well done, not only by our ticket office but our ticket holders are happy to have the opportunity to have a little skin in the game.

Radakovich meets with the media Friday "

“One of the negatives we've had, not only because of the growth and construction in athletics but the campus itself is we've lost 2,000 parking spaces. One of things we've worked on is finding alternative parking locations. Our friends at NewSpring Church and their new development just off Highway 93 will come into play. We have an arrangement with them. And then we created Seneca Creek Meadows, which is just down off Seneca Creek Road. Both of those areas will be serviced by buses that will run counterflow on Highway 93. So it's about a four-minute ride from either of those locations to the transit hub that is down at the end of the road in front of McFadden. We think that will be a real plus for us. We want to keep the fan experience at the top of our priority levels.

“We are moving forward with the football operations center and Littlejohn as well as our new tennis center. That means in a little under four years we will have a little over $176 million worth of facility upgrades with no tax dollars or student fees, just all private gifts. I think that's a testament to our fan base.

“When the football staff moves into the football operations center, we are going to re-purpose the WestZone thanks to a gift from the Michael Nieri family - one of our cornerstone partners - and we are going to make that the Nieri Family Academic Enrichment Center. We will move those services from Vickery Hall on campus and will move them to the WestZone, and they will get about 10,000 more square feet. Not only to do academic work but to work with Dr. Loreto Jackson and the student wellness and development area. All of that will be on the second floor of the WestZone.”

“That's not off the table. It's something that we continually look at, and we assess. Certainly, the ACC Network will, in time, give us some additional resources with which to work. But we want to make sure we are doing what works at Clemson. Given our physical set up and our geographic setup, some things may work better than ever. We have a small team within our administration that go out and look at options. As of now, there's been no movement to make any changes.”

“I think it will increase our exposure and reach as a conference, and I think it will help us, and the resources it will provide will be a big plus. We are going to touch $100 million in our budget for the first time at Clemson. As our programs continue to grow, then things that happen outside of our sphere like IPTAY and ticket holders will become increasingly important. In the beginning of the next decade - probably 2020 or 2021 - we will see some significant resources become available to us.”

“We are firmly entrenched in the eight-game camp. It's worked well for Clemson. We've had a scheduling philosophy that not only do we play the University of South Carolina, but we go out and play top-level opponents. We think that's a positive. We are in that camp, and it's been an incredibly close vote the last couple of years when it's been a topic of conversation. We continue to work with some of our schools that we know are of a like mind to ensure we stay in that area. It's all important for our community and our region that we have seven home games. That's easier to do with an eight-game conference schedule.”

Any chance cross-division rivals is done away with?

“I think there are some cross-division rivalries that have some long-standing relationships. Such as Florida St. and Miami. They had both played for 30 years before both joining the ACC. They were able to capture that by keeping them in different divisions. Clemson and Georgia Tech is a good regional rivalry, and I think NC State and North Carolina are permanent opponents. Part of this was to keep these rivalries. You couldn't do away with them in one fell swoop. Right now, ACC football is as strong as it's ever been and I don't see the need to tinker with that at this point in time.”

“We have good coaches, and they are all really intelligent, and Brad puts more pressure on himself and his staff than I could. And I wouldn't do that. We expect to be successful in everything we do. Some programs are at different levels, but we want to see the program in all of our programs being excellent.”