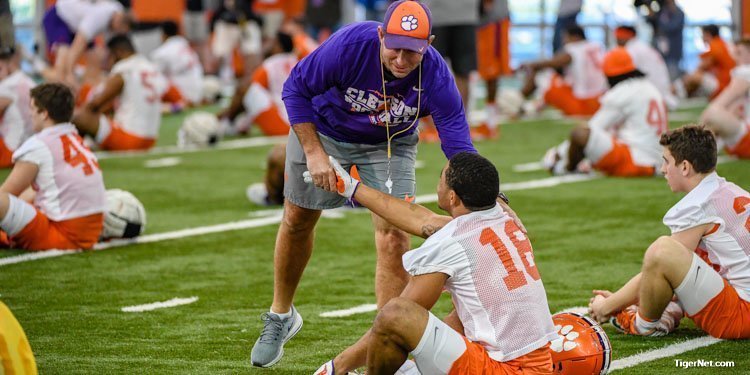 CLEMSON – Last team off the field, one of the first ones back on.

Clemson walked off the field in Santa Clara as the National Champions a mere 52 days ago and walked back on the practice field Wednesday for the start of spring practice.

“We were the last team to walk off the field in college football, and now we’re one of the first to get back on it,” head coach Dabo Swinney said. “We decided to get back out here today and turn the page, and really start over and start building this team. We have a lot to do – we have 14 more practices. It was lots of fun today to come out here and see a lot of new faces. Seventeen mid-years – guys are getting their first practice at Clemson. There are a lot of guys in new roles, and guys that are coming off a year where they gained lots of confidence and experience – mentally and physically.

"It was a really good start. This is about starting over – not just reinstalling your offense, defense, and kicking game - but it’s also reinstalling your program and the core values of your program and kind of resetting, if you will, in every sense of that word. I’m really proud of how they worked today. We’ve got a lot of little things that we have to teach and clean up. We had a lot of guys in here that didn’t even know where to go – they were trying to figure it out, and it’s a very fast practice. I was really pleased. We practiced for a little less than two hours – it was very efficient. It was a good start. We’ll have another day in shorts on Friday, and then we’ll get the pads out on Saturday.”

“They’re really talented – exactly we thought they would be,” he said. “They are in shorts, so it’s a different game, but all three of those guys are exactly what you hoped they would be just as far as natural ball skills go. There’s great size in that group. It’s some exciting, young talent for sure.”

There is also a lot of youth along the defensive line, a group Swinney is excited to see compete this spring.

“Obviously, the defensive line. We recruited a bunch of guys, but I don’t know how quickly they are going to translate,” Swinney said. “They’re physically gifted, that’s easy to see – I saw that in drills seeing these big guys move. Who can translate it quicker and transition from the meeting rooms and the speed of the game, the physicality of the game? The roles are kind of reversed now. We’ve got a veteran, experienced offensive line going against a bunch of young guys.

"With Jordan (Williams) and Nyles (Pickney) right here it would be a smoother thing, but they’re not. It may be a blessing for us, who knows, because now with Xavier Kelly it’s sink or swim – he’s got to get it done. Tyler Davis – he ran out there first today.” Xavier (Thomas), Justin (Foster), Logan (Rudolph), KJ (Henry), (Justin) Mascoll, and all those guys. That’s going to be the group to me that is obviously very talented, but there’s a ton of competition. How is it going to sort out? Who knows. It will be fun to watch.”

Tavien Feaster is returning for next season

“We went through his draft grade and where he was and what he needed to do. He’s really taking it to heart. It’s the best he’s ever been for every area. He is focused and confident right now. He’s worked his tail off. He is one of the guys that the guys see as a leader – he’s earned that. It’s fun to see guys grow and mature. He’s got the eye of the tiger. I really like the look that I see in him right now and his body language. I think when it’s all said and done that if we can stay healthy, then we can have one of the best backfields out of anyone in the country.”

“Most likely he’s not. He wants to go into the Marine Corps and become and an officer or a Navy Seal. He’s really locked in. He’s out here coaching, and he’s enjoying doing that. But, I don’t know. Most likely, right now, he’s leaning towards not playing next year – but, that door is open for him. There’s really no rush or urgency right now to have him lock something in. Young people change their mind.

"The stuff that he has dealt with injury wise – he didn’t practice one play before the National Championship where he played 19 snaps. He’s really dealt with a lot with his infection and his knee and all this stuff – just trying to get back to being healthy. He’s been great. He’s been meeting with the guys and kind of has been Coach Williams – he’s done a good job of that. Who knows – most likely he won’t return, but I don’t know for sure.”

“They’re great – it’s a really good group. It’s been fun, and I’ve gotten a lot of good feedback from all the different touchpoints that touch these guys – the academics, nutrition, strength and conditioning, whatever. It’s a good group. They’re focused and dialed in – I have not had one issue with them. They’re excited and eager. It’s been fun for them to have each other. They’re off to a good start. It’s a blessing to have them here because I don’t even know what we would have done this spring in certain areas without having all these guys here to fill in some spots and give us a chance to practice the way that we need to practice.”