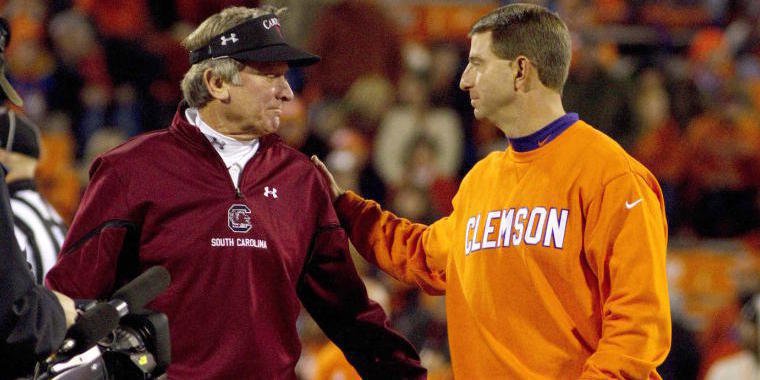 What will it take for another team in the Atlantic Coast Conference to rise up and challenge Clemson’s supremacy? Steve Spurrier says it will take high-level recruiting and the belief they can win.

Clemson defeated Pitt 42-10 in Saturday’s ACC Championship Game and have outscored its last two ACCCG opponents by a combined score of 80-13. The dominance doesn’t end there, however.

Clemson won its 53rd game in the last four years to add to existing school and ACC records for wins held by Clemson's 2018 senior class. It tied the 2014-17 Alabama Crimson Tide for the second-most wins by a senior class in FBS history. (Note: The 2015-18 Alabama class pushed its record to 54 wins with a victory on Saturday).

Former Florida and South Carolina head coach Steve Spurrier said Monday that it would take a big effort for another ACC team to catch the Tigers.

“Well, first of all, they have to try and recruit as well as Clemson recruits. Just like Alabama and Ohio St. and Oklahoma and these other schools that are doing extremely well,” Spurrier said on SiriusXM’s The Playbook. That is the first step we all look to. And then after that, you have to develop, coach, and believe. You have to believe that you can beat Alabama and Clemson and all of that. I tell you what - I think Georgia is just as good as those four teams up there, but for some reason or another they can't get hurdle Alabama. And they had a very good chance this past weekend. That is the first step - if you want to beat one of those powerhouse guys you have to match up with them and believe you can beat them.”

Spurriers was the head coach of those Florida teams back in the mid-’90s that set the record, and he said those teams were marked by players who believed they should win, something he sees in Clemson.

“I tell you what, at the time we were doing it we didn't think it was that hard. That was our goal every year - to win the division and win the conference and if we had a team good enough to win the National that was a goal,” Spurrier said. “We had very good players that believed that we were good enough and if we played well enough we could win the SEC four years in a row.

“And obviously, Clemson and Oklahoma have done that. And it won't surprise anybody if they do it again. We slipped up the next year and lost just one game the next year and one year the after that kept us from winning the SEC. It's hard to do, I guess, but when we were doing it we felt like, 'Hey, we are supposed to be doing this. We have the players to do it so let's go do it.' I think that is the attitude that Clemson and Oklahoma have.”