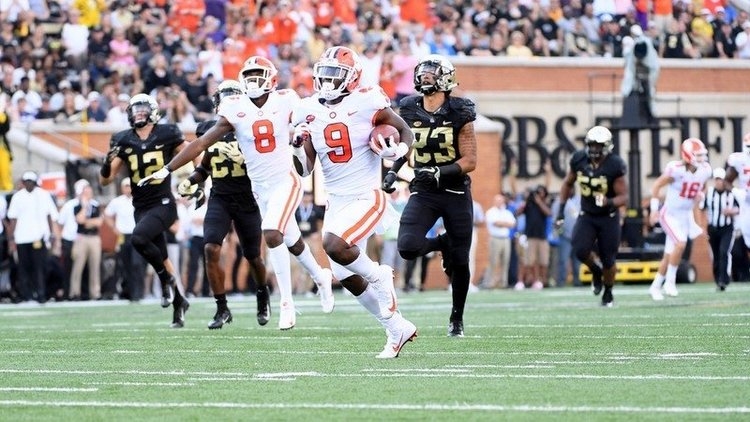 We're analyzing where the Tigers stand going into spring by position with a talented Clemson stable of running backs next up:

Where does Travis Etienne fall in the 2019 Heisman race?: There is no doubt that Etienne is a Heisman contender heading into 2019. The Jennings, La., native has put up monster numbers during his first two seasons and has a chance to break a couple of Clemson’s hallowed records next season.

Imagine what he could do if he had a slightly larger workload. Wisconsin’s Jonathan Taylor led the nation last season in averaging almost 24 carries per game. The Badgers are known for riding their backs until they’re too worn out to be effective.

Etienne was 44th in the nation last season in carries per game, averaging 13.6 a contest. He was fourth, however, in yards (1658) and seventh in yards per carry (8.13). The Clemson coaching staff ensures that their players are fresh entering the stretch run, and Etienne looked a step faster than everybody else during the postseason.

He had two games in which he eclipsed the 20-carry mark (Syracuse and South Carolina), and had just one other game in which he had 16 carries.

Despite the lightened load, he finished his sophomore season with 1,658 yards rushing on 204 attempts and 24 rushing touchdowns. He spent more than a few weeks on everybody’s Heisman list and should be in the conversation next season.

Is that enough to make him Heisman material? You better believe it is. - David Hood

Will Lyn-J Dixon make a move this spring?: Lyn-J Dixon is ready to carry more of the load.

The rising sophomore speedster was an integral part of Clemson’s National Championship season, rushing for 547 yards and five touchdowns in 13 games as Clemson won its second national title in three years.

Dixon finished third on Clemson’s team in rushing with those 547 yards, one yard less than senior Adam Choice, and he led the Tigers in yards per carry at 8.8 yards per carry. He did all of that in averaging less than five touches per game.

However, Dixon showed what he can when given extended action, gaining 163 yards on just 10 carries at Wake Forest in October and gaining 116 yards on just four carries against Louisville.

With the graduation of Choice, Dixon will likely battle veteran Tavien Feaster for playing time and a spot on the depth chart during the spring. With Dixon’s speed and athleticism, and a year of experience under his belt, it won’t matter if he’s second or third behind starter Travis Etienne – he will still be a big part of the Clemson offense. - Nikki Hood

Can Clemson actually improve on its explosive run game?: The 2018 season set quite a high bar but it’s not an unreasonable goal.

Clemson’s leaders in those efforts return in Dixon (8.82) and Etienne (8.13), both finishing in the top-seven nationally in yards per carry. Etienne and Dixon helped anchor a strong finish too, where the Tigers averaged 7.47 yards per carry and scored four rushing TDs a game in November. Dixon averaged 12.7 yards per attempt with a touchdown that month, while Etienne had his two strongest efforts of the season in November (8.25 YPC/5 TDs) and December (8.78/5).

Feaster has shown glimpses as of that explosiveness as well, taking a 70-yard run to the end zone versus Louisville in November and tallying three runs of 47-plus yards as a sophomore.

With Adam Choice out of the mix and freshmen Michel Dukes and Chez Mellusi not on campus yet, there will be more reps to go around for the trio of Etienne, Feaster and Dixon to show what they can do with bigger roles and a bigger spotlight. - Brandon Rink