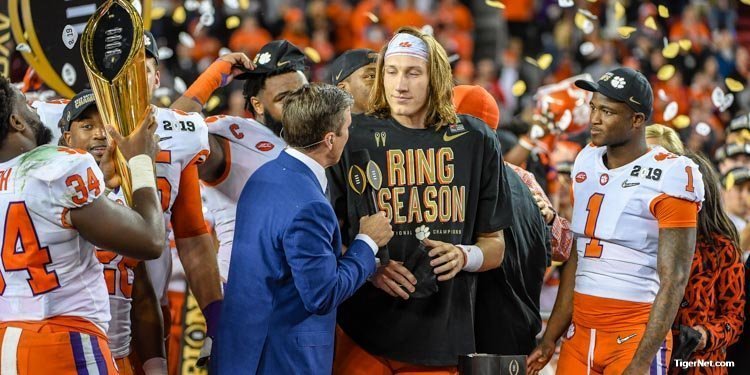 Another spring practice is in the books, and we have a long, hot, summer of waiting and wishing while counting down the days until the ACC Kickoff, head coach Dabo Swinney’s media golf outing and the start of fall practice.

That means we have a lot of time to look back at the spring and look ahead to the fall and we will get all of that started this week with a look at the offense. Today we will take a glance at the quarterback spot.

Starter Trevor Lawrence didn’t post eye-popping statistics during the spring game, completing a 19 of 34 passes for 232 yards and a touchdown. It was the type of game he wanted heading into the offseason.

“I’ll probably take a week or two off from throwing,” Lawrence said. “We’ll be lifting the next two weeks with Coach (Joey) Batson, so we’ll do that, then we’ll get some time off. We’re not going to have a lot of mandatory stuff, so everyone’s just doing work on their own and getting better. We’ll do a lot of stuff this summer as far as throwing together.”

Swinney saw a quarterback who is in command of the offense.

“This time last year he was just trying to prove it, kind of getting in line,” Clemson coach Dabo Swinney said. “Now it’s a different dynamic for him – he is in command, and now we need him to lead, not get in line.

“This spring he’s able to study 15 games of himself; last year at this time all he had was high school tape. With that comes confidence and a little more attention to detail.”

Lawrence said he feels like he improved throughout the spring.

What can we expect from Lawrence next fall? He will start the season atop many of the Heisman watch lists, and that campaign will closely parallel the Tigers’ fortunes. He gets his first big test on August 29th in the season opener against Georgia Tech, a Thursday night game in Death Valley that features the debut of the ACC Network.

Two weeks later, Texas A&M comes calling in what might be the Tigers’ biggest out of conference matchup during the regular season.

Lawrence smiled when I mentioned that he doesn’t have to do it by himself – he has a lot of weapons at his disposal.

“We got a lot of play-makers. I mean, obviously the new guys Frank (Ladson) and Joe (Ngata)—they had a great spring, and Travis had a good spring,” Lawrence said. “Tavien (Feaster), Lyn-J (Dixon), those three guys had an awesome spring, got a lot better…We’ve had a good spring kind of just learning from each other, encouraging each other, so it's been really good.

“That’s a lot of good guys right there.”