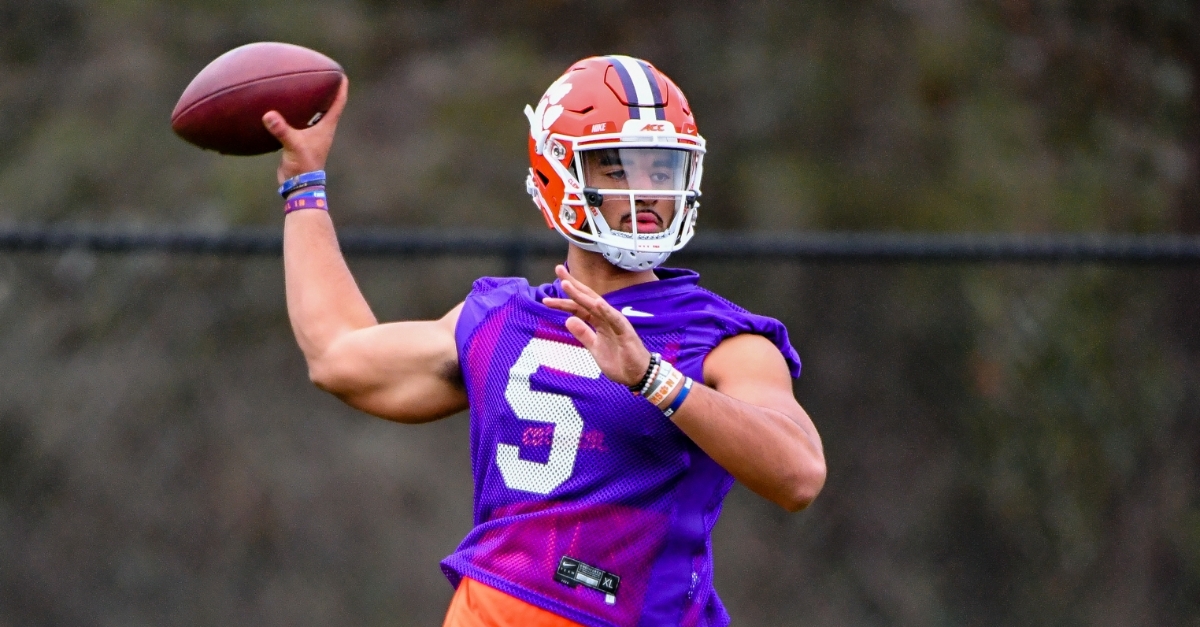 DJ Uiagalelei drew a crowd and showed off his arm more than once.

CLEMSON – You know when you hear The Boys are Back in Town blaring from the loudspeakers that spring practice is back in session.

The Tigers opened 2020 spring practice Wednesday afternoon in the Poe Indoor Facility. The practice fields outside the indoor facility (and the Reeves complex) are having new sod and drainage systems put in, so there is only a small grass field for outdoor work at this point.

There is a lot to get to:

We knew about most of those, but Bresee (big brace on left knee) and Turner were a surprise. Bresee worked out with strength coach Larry Greenlee and looked to be moving well.

As for Johnson – we told you that the chance to move to the offensive line was on the table and he had a new number and worked out with Robbie Caldwell’s group.

Another position change of note – former quarterback Ben Batson was also sporting a new number and worked out with the safeties.

We were told that Cade Stewart was not in attendance because of a class conflict, and Hunter Rayburn and Mason Trotter split first-team snaps at center. The first-team line was Jackson Carman, Matt Bockhorst, the centers, Will Putnam, and Jordan McFadden.

One more position note – punter Will Spiers was working with the quarterbacks (after special teams drills). We know he has a good arm and it looks like he will be an emergency option this season. He was also very accurate in the throws we watched.

Naturally, we took a look at the freshmen first. The Tigers have several mid-year enrollees participating in spring practice and we headed over to the defensive side of the ball first.

I’ve written several times that defensive lineman Bryan Bresee is a natural leader, and despite this being just his third practice (he had two bowl practices) it’s easy to see why he is considered a future team leader. He was seen joking and laughing with his teammates and interacting with the coaches like an old veteran.

It wouldn’t surprise anyone if defensive end Myles Murphy makes an impact this year. He already looks the part at 260-plus pounds and even in drills shows quickness and speed.

*The linebackers were a point of emphasis as well. We all know the story of Trenton Simpson and how he arrived at Clemson. Becoming a Tiger has been a dream of Simpson’s since he was a little boy and you could tell by the ever-present smile on his face in warm-ups that his dream had come true.

Once warm-ups were over, however, Simpson was all business. He just looks the part.

He has length and size and can run like a deer. There is a lot to like there.

*The offensive linemen (Paul Tchio, Mitchell Mayes, Bryn Tucker) didn’t look as lost as I thought they might. You can tell the two bowl practices were good for all of the early enrollees, and as I’ve written before, all of the offensive linemen in this class are not only talented, they are all extremely bright. Who looks like they could hold their own today? Bryn Tucker.

*Wide receiver EJ Williams did nothing to dispel what we’ve thought about him. He is going to add weight between now and the fall, so his size won’t be an issue. But he has great hands and all of his routes are fluid. He is one of those guys that you see him run and it looks like he isn’t running very fast, and then you realize he’s covered a lot of ground. Long, space-eating strides. I think he has a great chance to be in the two-deep this season.

*Safety RJ Mickens has the size and length you like in a safety. Of course, whenever you talk about defensive backs you talk about their ability to change direction and flip their hips. There is a reason this guy was highly-rated…..he can do everything you want him to do. It’s going to take time for him to learn the scheme and everything that Brent Venables asks of his defenders, but his tools ensure he’s off to a great start.

Cornerback Fred Davis is the same way. I saw him out in Dallas and was surprised that a corner with his length could cover ground as fast as Davis. He’s the real deal.

*DJ Uiagalelei drew a crowd and he showed off his arm more than once. However, he also showed accuracy and touch. Taisun Phommachanh looks a lot bigger and he was all business out there. He looks like a guy serious about competing for a job. More on the quarterbacks later.

*A little birdie snuck over to me and said the safeties group will be one to watch. One name to look out for? Ray Thornton.

We are headed back out for interviews, so obviously more info is on the way.