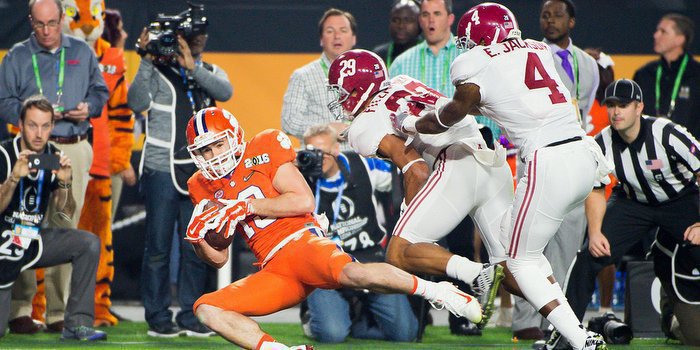 Renfrow says he has signed over 3,400 Sports Illustrated covers

CLEMSON – One Clemson fan was so excited to see Hunter Renfrow Sunday that he threatened to give the junior wide receiver a hug and a kiss. Hundreds more brought their Sports Illustrated cover photos of Renfrow’s touchdown catch against Alabama for him to sign.

Just another day in the life of Hunter Renfrow, who has perfected his autograph and kept a running tally of how many covers he has signed since the magazine came out in January.

How many? A lot. And Renfrow added to that with Sunday’s Fan Day.

“It was good (Fan Day). I kept a little tally of Sports Illustrated. I think I was at 183,” Renfrow told TigerNet Monday. "A lot of people were like, 'Oh I should've brought it and got it signed.' One hundred and eighty three is a good bit, so I'll just add it to my list. I'm at about 3,400 now that I’ve signed.”

Renfrow even spent time with his father, perfecting his signature.

As for Fan Day, Renfrow said none of the fans tried to give him a hug or a kiss. 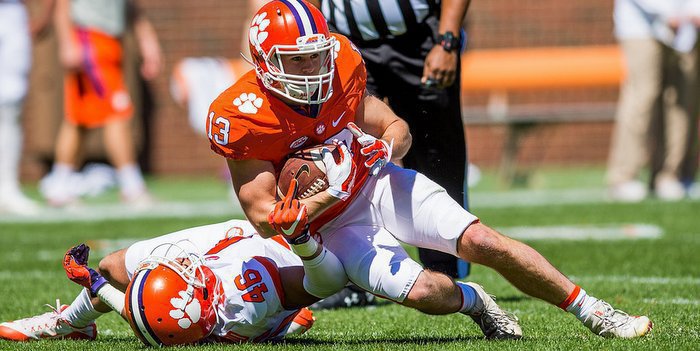 Renfrow says he has signed over 3,400 Sports Illustrated covers"

“It was pretty good. It was about like normal,” he said. "I did read that (about the fan) and I was thrilled that it did not happen. It's definitely one we appreciate. It's why we come to college. What college kid doesn't want people standing in line to come get autographs and have a chance to meet people? We look forward to it, just like after games when we look forward to being with the fans out on the field and interacting with them.”

One fan interaction stands out above all the others.

"I met a guy out in Phoenix whose dad was sick and his dad ended up passing a month after, so just getting to talk with him,” Renfrow said. “I meet a lot of people, but for some reason, I remembered that, so being able to talk to him and connect with him a little bit.”

Now that the Tigers are close to starting the season, Renfrow and the rest of the Tigers are starting preparation for Kent St., and he has a new quarterback in Kelly Bryant. Renfrow says Bryant earned the starting nod with a strong fall camp.

“Hunter (Johnson) and Zerrick (Cooper) didn't do anything to lose the job, he's (Bryant) just been that good. He's really taken the reins,” Renfrow said. “He's being recognized as that guy right now. We know he's the guy and we're going to be confident going forward with him.

“He's just making the throws consistently. He'd have a good throw here and there (in the spring), but now he's putting balls on the money. He's not sitting back there ripping five-yard hitches, he's putting a little touch on it. He's able to process things faster and put it where it needs to go - catchable balls. He's not taking off running because he doesn't know what do to. He's staying back - a lot like Deshaun (Watson) - going through his progressions and letting things happen.”