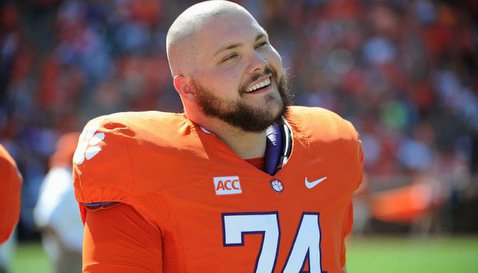 Region has slimmed down considerably since the spring

CLEMSON – Day two of Clemson’s fall practice is in the books, and a lot of the buzz surrounding the first part of practice has been the emergence of Spencer Region

Region, who has battled weight issues since first arriving on Clemson’s campus in 2011 and has played just 68 snaps over six games in his career. However, Region was noticeably slimmer during Dabo Swinney

One observer who has seen both practices said that Region’s footwork has been a surprise on the offensive line, and left tackle Isaiah Battle

Isaiah Battle
Jr. Offensive Tackle
#79 6-6, 280
Brooklyn, NY
View Full Profile said Saturday that Region is the one player who has impressed him the most..

“Proud of him because he did what he hasn’t done in three years and that is to make a commitment and make the choice that he really wants it bad enough,” Swinney said. “There is nobody on this team that I am more proud of than Spencer Region. That is not easy to do – we could all probably lose five founds and it is hard to do. That guy was 400 pounds when he got here, which was very disappointing.

“The difference between him and (Tyrone) Crowder – Crowder came in here at 380 – but in one year he is where he needs to be. Spencer didn’t really buy into that and it took him some time, but hey, better late than never. But I am really proud of him – 333 pounds is the lightest he’s ever been here. Not only that, but he is about 250 pounds of straight muscle. I am proud of him. He almost has abs. He has a two pack. I am proud of Spencer Region and hopefully that will transfer onto the field. He had his best summer. “

“We didn’t think about nutrition years ago, but now you need it to give you an edge,” he said. “It took a while, but the team has bought into it. It is now cool to be nutritionally competent.”

Region won’t lose much more weight if the heat continues to stay away, and Swinney said he can’t remember a cooler start to August camp.

“It has been Cupcake Camp so far,” he said. “This is my 25th season of college football and I have never been around weather this cool for the first two days. It has been good in that it has added to the energy and the attention to detail by the players. At the same time, we need some hot days from a conditioning standpoint. We know they are coming. When we put the pads on in the heat it will separate some of the positions.”

However, the practice has been as good as can be expected this early in the process.

“The quarterbacks have been really good. We had some C-Q (center-quarterback) exchange issues with Deshaun [Watson] today,” he said. “We’ve got to get that corrected – just where he’s getting a little antsy with his eyes and trying to go to step b before he completes step a as far as putting his eyes on his reads. He really finished practice strong. Cole is very sharp. We’ve got a solid group there. You can tell that they’ve worked all summer.”

Other notes and nuggets

On the progress of Joe Gore

“I think he had a great spring. We are pretty pleased with what we’ve seen out of Joe Gore. The biggest thing with Joe is that last year he was hurt and we couldn’t depend on him and get him on the field. We couldn’t get him the reps and he is a developmental guy. Sometimes you sign guys that are very raw. You see the skill set and you just hope that you can develop them. With Joe Gore, he was a defensive lineman and he didn’t know anything about playing the offensive line. We had to start from scratch and develop that product. We aren’t going to have a great year if he isn’t excellent for us this year.”

“The group that really impressed are those guys that came in in January. You can tell that they are much further ahead. A guy like Kyrin Priester

Kyrin Priester
Fr. Wide Receiver
#17 6-1, 190
Lilburn, GA
View Full Profile – man, he’s just light years better than where he was during the spring and he was pretty good in the spring. That’s what you’re really looking for during these first few days – who’s put the work in during the summer – not just physically, but mentally.”

C.J. Fuller
Fr. Running Back
# 5-11, 200
Easley, SC
View Full Profile look really good. They’re big, strong, fast. They’ve been very impressive the first couple of days with a lot of things thrown at them – especially C.J. because he just got here. Adam has been here four or five weeks so he’s gotten some installation and some practice. It’s two really good looking freshmen. I think they’re going to bring a dimension that we haven’t had. Then, you throw in Tyshon Dye

Tyshon Dye
RS Fr. Running Back
#23 6-1, 205
Elberton, GA
View Full Profile when he’s ready and [Wayne] Gallman and all of these other guys and it’s a talented, deep position.

“The kicking game is good. That’s one of the things I told the team today after practice is I really like our roster. With the depth that we have – we’ve got walk-ons that could play at a lot of places. This is a good looking roster. A bunch of guys that can run and athleticism. With that, we should be great on special teams. I mean great. It’s critical that that segment of our game is great. We were pretty good in a couple of areas. We were obviously great in field goal kicking and field goal blocking. We’ve got to continue to do well there. Solid in coverage. We’ve got to improve our return game this year and that’s something that we’re very focused on. We’re pleased with what we’ve got done in the first couple of days. Coach [Danny] Pearman will be back tomorrow [Sunday] – his father passed this week so it’s been a difficult time for he and his family. We’ll be glad to get him back in the fold on Monday.”

*The Tigers will take Sunday off, and then return to practice Monday through Saturday next week. The week will be completed with a scrimmage on Saturday.

Danny Pearman
Assistant Head Coach / Tight Ends
View Full Profile missed his second consecutive practice after the death of his father last week. He will return to Clemson on Sunday.

*Among the former Clemson players at practice were quarterbacks Rodney Williams and Homer Jordan. Williams will return to the Clemson radio network as color commentator this year, a position he last held in 2002. Jordan quarterbacked Clemson to the national championship in 1981.

*The Tigers used a drone during the second half of practice during some drills. The device films the plays from just above the players from behind he offense and gives the coaches a different perspective when watching practice. The drone is operated by defensive player development coach Rhett Brooks, the son of defensive line coach Dan Brooks