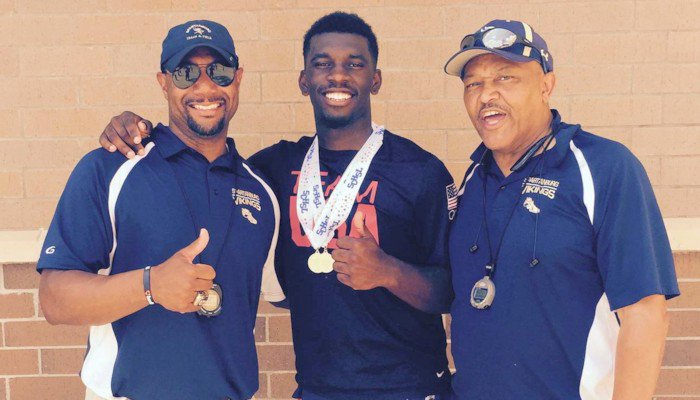 Feaster celebrates after the meet

View Full Profile proved once again Saturday that he is one of the fastest high school athletes in the country as the Spartanburg junior swept the 100- and 200-meter titles for the second straight year at the 4A South Carolina High School League state track and field meet at Spring Valley High School.

Feaster finished with a time of 10.42 in the 100 and broke a state record by crossing the finish line in 21.11 in the 200. His time in the 100 was second-fastest in the nation this year, and the time also matched former Spartanburg standout Stephen Davis' winning time at the state meet.

Feaster’s time in the 200 was 11th fastest in the country this season.

The 2016 Clemson running back commit told TigerNet after the meet that a good week of practice led to his fast times.

“It was excellent. I came in really focused today,” Feaster said. “I thought I had a good week of practice and I prepared myself to just go out there and do what I do.”

He then said that he wasn’t worried about the records or the times – he just wanted to win.

“Honestly, I wasn't worried too much about the time,” he said. “I was just more concerned about winning the race. I just wanted to win it and defend my titles.”

The number one player in the state of South Carolina for 2016 and the 30th-ranked player nationally by ESPN, Feaster committed to Clemson in early February at his school. He said that while other schools still call, he is focused on the end of his school year.

“It's slowed down. I'm still being recruited by a couple of schools, but it has definitely slowed,” Feaster said. “In my mind, I'm just working on getting all of my grades and stuff where they need to be. “

Feaster will participate in the national track meet in June before returning his focus completely to football.

“I’ll probably go to the national track meet in June and then it will be back to football,” he said. “I'm going to try to go to Clemson's camp but I've got to check the dates because the national track invitational is June 16th and 17th.”