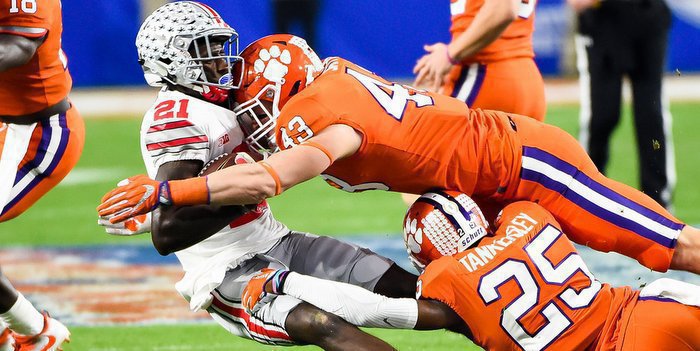 Smith makes a jarring tackle against Ohio St. in the Fiesta Bowl

Now he wants to take that success to middle linebacker.

Smith redshirted in 2015 but played in every game last season, logging 13 total tackles. He was a force on special teams, something that he enjoyed.

Smith has been a regular part of the linebacker rotation this spring. The departure of Ben Boulware has led to former MIKE (middle) linebacker Kendall Joseph spending time at the WILL (weakside) spot formerly occupied by Boulware. Smith has been sharing snaps at MIKE with Tre Lamar, and he told TigerNet he is comfortable in the middle.

"Pretty comfortable. I've spent most of my time here at MIKE," Smith said. "I've played a little bit of WILL, and then during the season at SAM and in certain packages, I've been a SAM-defensive end hybrid. I'm pretty comfortable at MIKE."

Smith makes a jarring tackle against Ohio St. in the Fiesta Bowl "

While two of the three linebackers off of Clemson's national championship team return, there's a huge leadership void left by the departure of Boulware, but Smith said each member of the linebacker corps has taken it upon themselves to fill that void.

"Ben leaves a big hole to fill in regards to leadership, but we've come together as a unit to fill that role," Smith said. "Guys like Kendall (Joseph), Dorian (O'Daniel) are taking the lead, but as a unit, we're coming together to fill that role. Each one of us believes that we're a leader, regardless if you're a freshman, redshirt, whatever, you're a linebacker. Coach V (Brent Venables) stresses that the linebacker has to be the leader on the defense, so we pride ourselves as individuals to be leaders when we're out there on the field."

Clemson’s middle linebacker is responsible for making many of the defensive calls, and Smith said he’s spending plenty of time watching film.

“Communication and knowledge is my best part, and my biggest improvement is just bringing it to the field. I have been out there competing. This is my third spring actually. It has been good to get around the guys and compete out there and feed off the older veterans such as Kendall and Dorian. Overall, I think this has been a really good spring for me.”