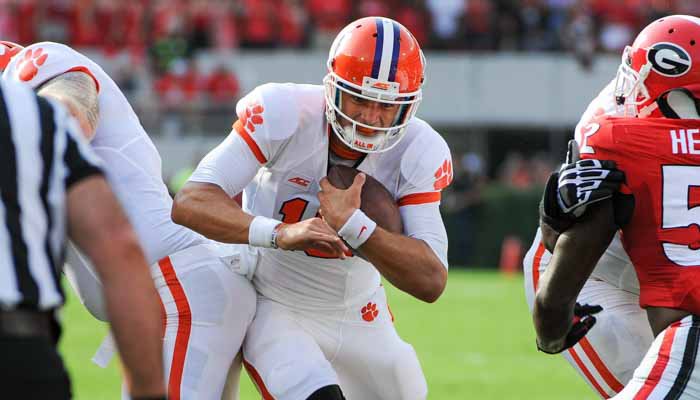 Saturday’s home game against South Carolina is more than just the first home game of the season and the first chance for Clemson fans to see the Tigers run down the hill in 2014: It’s a chance to send the memories of a bad fourth quarter at Georgia into a dark corner.

The Bulldogs came into Clemson last year and left with a 52-13 defeat.

WHAT: South Carolina St. at No. 23 CLEMSON

*Will Clemson’s loss at Georgia hurt them this week? - A talented Clemson team lost on the road at Auburn back in 2010, and that loss seemed to haunt the Tigers the rest of the season. If that’s the case, the Tigers could take a while to get going against South Carolina St. The Bulldogs opened the season with a 63-0 win over Benedict, and head coach Buddy Pough has pulled in some talent to Orangeburg. The Bulldogs started off slow against Benedict last week – leading 14-0 at the half – before reeling off 49 second half points in the 63-0 victory. The Bulldogs finished with 541 total yards. Adrian Kollock was 15-18 for 160 yards through the air, but the run game accounted for 380 yards as seven different rushers racked up at least 30 yards. For a Clemson defense that got gashed in the run game in the fourth quarter last week, the fly sweep could be a dangerous thing. The Bulldogs were stingy on the ground, a dangerous recipe for a Clemson team that struggled in the run game at times last week.

Too much talent - The Bulldogs were one of the best defenses in the FCS last season, and the Tigers still racked up 512 yards of total offense in what was little more than a cameo for many of the starters. Cole Stoudt

Cole Stoudt
Sr. Quarterback
#18 6-4, 231
Dublin, OH
View Full Profile was 19-of-20 for 143 yards and three touchdowns in a backup role, and if Stoudt leaves he has a talented understudy in freshman Deshaun Watson

Deshaun Watson
Fr. Quarterback
#4 6-3, 204
Gainesville, GA
View Full Profile . In fact, the Tigers have a lot of talented youngsters who will see a lot of playing time Saturday in backup roles, all of them hoping to get a chance to impress the coaches in a game situation. Included in that mix are freshmen running backs Wayne Gallman

Tyrone Crowder
RS Fr. Offensive Guard
#55 6-2, 322
Marston, NC
View Full Profile . On the defensive side of the ball, it will be the first chance for Clemson fans to see (in person anyway) defensive tackle Scott Pagano

This is a big week for this team - What we’ve heard out of Clemson this week is that practices have been brutal and tough, and that head coach Dabo Swinney

Dabo Swinney
Head Coach
View Full Profile has been pushing this team harder than ever this week. That tells me that last week’s loss resonates with this team, and the coaches are doing everything they can to get it out of everybody’s system. That means this is a big game – not from a standpoint of what a win means nationally- but from a standpoint of getting back some confidence and swagger with Florida St. sitting just over the horizon. This game is the perfect situation for this team this week, especially with an off week next week. This is also a big week for the defense – which gets Corey Crawford

Corey Crawford
Sr. Defensive End
#93 6-5, 276
Columbus, GA
View Full Profile back at defensive end – to prove that last week was a fluke. Special teams also need to take a step forward – could we see Alexander at punt return? Will the kickoff coverage problems be fixed?

I think this offense is still trying to find an identity – that was easy to see last week when the Tigers ran the ball with success in the first half but struggled once Georgia made adjustments. Are they a running team? Will this squad have more success throwing the football, following the pattern that Morris had over his first three seasons in Clemson? That might make for a slightly slow start Saturday – especially with the early start time – before things get into gear. This Clemson team won’t score as easily as it did last season, but the defense will help and the Tigers will begin to pull away.