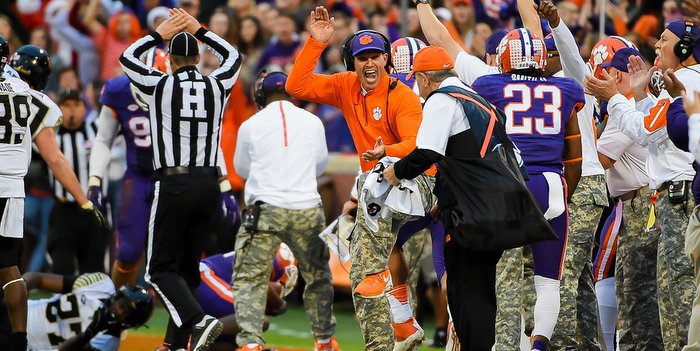 Venables knows his defense has a tough test this weekend

Football season is a long and grueling 13 weeks, and while every team suffers through bumps and bruises over the course of the season, Clemson has had to endure a tough ten-week stretch with no break.

The Tigers played three games over the first 12 days of the season, had the next 16 days off and have not had a break since the off week in late September. In 2014, that probably wouldn't have been a problem since the Tigers were two and three deep at some spots on defense, but with more than 40 freshmen on the roster Clemson's more experienced players have seen the brunt of the action.

Linebacker Ben Boulware has played 640 snaps through 12 games this season, while his counterpart from 2014, Tony Steward, played just 495 snaps in 13 games a year ago. Shaq Lawson has played 597 snaps compared to 557 for Vic Beasley a year ago. Kevin Dodd has played 149 more snaps than Corey Crawford, while T.J. Green is just 11 snaps off of Robert Smith's total for last season and Jayron Kearse has played just 35 fewer snaps in one fewer game.

The numbers don't tell the whole story for Clemson's struggles over the last couple of games, but fatigue and having tired legs are certainly a factor. However, defensive coordinator Brent Venables won't use that as an excuse.

“It's tough [to play 10 in a row], but we've won them all, but you'd be naive to believe that it doesn't affect you somehow," Venables told the media Tuesday afternoon in the WestZone. "The rest would do you well mentally and physically. Has North Carolina played the same amount in a row? I think it would be an advantage not to play that many in a row."

How players take care of their bodies - eating right, going to treatment, getting the cold tub - plays a major part in their effectiveness on Saturday, and Venables said head coach Dabo Swinney does an excellent of trying to keep players fresh throughout the week, so they'll be prepared to play on game day.

"It's tough, but I think Coach Swinney has done an awesome job and been very conscientious about managing our players, under those circumstances," Venables said. "The Wake game, for example, we were able to play more guys. That helped from a natural wear and tear and fatigue standpoint. I think he's managed really well. He's changed things up in the routine to keep guys fresh - and case anybody didn't know, it's harder now than ever to keep guys engaged on one thing for too long - and so they wouldn't get bored with the routine. Of course, Coach Swinney is a perpetuator of the positives, so he's very creative in a lot of different ways in how he manages a team from a head coach's position. I think we've probably handled it as well as we could."

Clemson's defense faces its toughest challenge of the season this Saturday in the ACC Championship as the Tigers take on North Carolina - a fast-paced, balanced offense - but Venables said that while tempo can be an issue he won't make it one.

"I think you've got to manage your personnel and try to be smart about playing guys. Hopefully, we're dictating some tempo," he said. "That's the plan - we play well, and we're helping dictate the tempo. You've got to play well as a team. If the offense is going three-and-out every time and we can't get off the field, that's a recipe for disaster, so no good plan is going to counter those issues if they happen. Playing well as a team, understanding the substitution pattern, if and when need be, and understanding how to do that within the course of a game when you're staying on the field. For example, if they get run out of bounds on our sideline and we need to substitute that's the time. When they sub, you can sub. I think we have a little bit of experience with that, so that's kind of the plan."

After all, Saturday is what the Tigers have worked all season for - a championship. It's Bring Your Own Guts.

"I don't know. I'm not going to create this life of its own issue. It is an issue. We need to be able to get lined up, put our hands in the dirt and play," he said. "If we do, I know we have a chance to be successful. I think that's the number one thing. I'm not going to say, 'Oh my gosh they go fast, and we've played 10 in a row. What are we going to do? What's the provisional plan?' What are you going to do? It's our last game. You've got to give it everything you've got. Is it BYOG? Let's go."