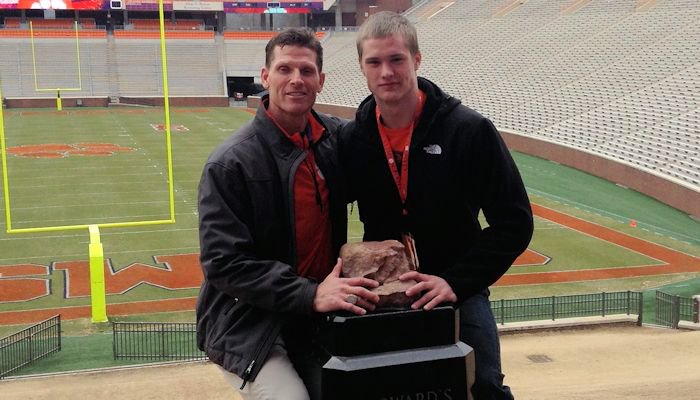 After spending several days with Brent Venables, Chad Smith knew that he and Clemson’s defensive coordinator were a match made in heaven.

It was the relationship that he forged with Venables during a high school camp, the similarities between their personalities and the value Clemson places on family that led the Sterling (VA) Dominion outside linebacker to commit to Clemson Thursday afternoon, becoming Clemson's eighth commitment for the 2015 recruiting cycle.

One of Smith’s coaches – Paul Troth – called the 6-4, 215-pound linebacker an intense player with a mean and nasty streak.

“He's a rangy. He covers well in space - a hybrid inside and outside backer,” Troth told TigerNet Thursday afternoon. “He's 6-4, 215-pounds. I think, depending on how much he puts on at the next level, he's going to be a standup outside backer in a 3-4 or he could play the weakside in the 4-3. He's mean. He eats and breathes football all of the time. He's very underrated in our state. To me, he's the best high school football player that I've ever been around in my time at Dominion high school in four years. He's a great kid to have and fun to watch. He makes plays. He does everything for our team - running back and receiver on offense, linebacker. He does everything.”

It was that intensity and attitude that Smith saw in Venables during one of head coach Dabo Swinney’s high school camps.

“I couldn't be more excited to be coached by one of the best defensive coaches and linebackers coaches in the nation,” Smith told TigerNet Thursday afternoon. “It's really exciting. I went down there for one of their camps and I got to see first hand his coaching style and it was just exactly what I was looking for. It was a match. It was a match made in heaven. I connected with him on and off the field.

“That's something that has stayed with me throughout the recruiting process and when it came down to a decision it wasn't that hard of one. I was going not only where I was loved but also where I wanted to be and where my type of position coach fit my style. I'm excited to work hand in hand with them down there, and I'm looking forward to living up to all of the expectations that they have for me and hopefully exceed those expectations. That's something that will happen if I put in the hard work and dedication starting today. That's something that I am more than willing to put in. I'm just eager to get down there and get started with my career at Clemson.”

After talking with Smith for several minutes, it was obvious that he was a friendly, well-mannered young man, but he said that when he steps on the football field all of that goes away.

“I would say that it's my passion for the game. I love the game of football,” Smith said. “I play with a lot of intensity. Whenever I'm on the field, I really become a different type of person. Off the field, I'm a nice, polite young man. Friendly. Likes to joke around. When I get on the field, I flip a switch and I'm serious. I'm focused. I'm zoned in. I believe that's one of my best characteristics that when it comes to football I'm a very intense guy and that matched with Coach Venables. He was a very intense guy and when I get on the field I'm a very focused guy. He's a very focused guy. I have a lot of passion for the game and so does he. It was just a match. That's the type of guy that I am on the field.”

Smith believes that Venables and the coaching staff can turn him into a top-level linebacker and give him the opportunity to fulfill a dream of playing in the NFL.

“When I went down there for my junior day visit, I was just in awe of the facilities, the campus and the people there, Smith said. “The family environment down there - the treated me as if I was one of their own and that really stuck with me. I've been in constant contact with Coach Venables. He has been telling me that I'm his guy and that he thinks he can do great things with me and that he can he can make me into one of the best linebackers at Clemson. He believes that I could fulfill my dream of being an NFL football player. He is my type of guy - very intense, motivating type of guy. That's the type of coach that I look for at the next level.

“Just the atmosphere when I went down there for the junior day visit and it was just a great environment. When I had to go back home, it made me not want to leave. I just kind of wanted to stay. I'm just excited that I can call Clemson a home away from home in the future. I'm looking forward to all of the hard work and dedication that I'll be giving to the program. I'm really, really excited to take this next step in my life.”

And off the field, he will be treated like family.

“That's what families do - they are out for the best interest of each family member. They are willing to give their best to make you the best and they are committed to you and they are dedicated to making you a better person overall. That's what Clemson is all about. That stuck with me throughout the entire process and I couldn't really find another school that preached a message like that. It made my decision a lot easier. There aren't that many schools out there that can offer what Clemson can offer. It makes them unique, in that way.”