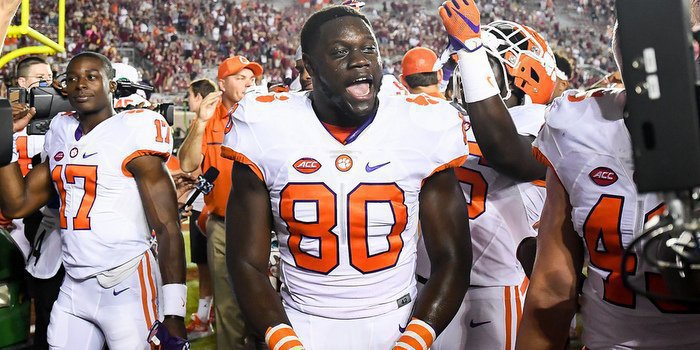 CLEMSON – Milan Richard isn’t overwhelmed by anything. Practice doesn’t overwhelm him. The thought of taking over for Jordan Leggett doesn’t get to him. He isn’t scared about having to replace so many key members of last year’s offense.

And he certainly isn’t scared of doing interviews.

The junior tight end from Savannah met with the media Friday afternoon in the indoor practice facility, and he was all smiles as he answered a number of questions from the assembled writers. Once his interview session was finished, he stood behind reporters and made faces at defensive end Clelin Ferrell while Ferrell conducted his interview session.

Ferrell broke out in laughter a few times, and once Richard was finished with Ferrell he moved over to defensive coordinator Brent Venables’ and started making faces at Venables. The usually stoic Venables couldn’t hold back his laughter – just like Ferrell – and once Richard was sure he’d caused enough trouble for one day he headed to the locker rooms.

Richard and fellow tight ends Garrett Williams, J.C. Chalk, Cannon Smith and Shadell Bell all have the task of replacing Jordan Leggett’s 46 catches from last season. That group brings back a total of five receptions – Williams and Smith each had two and Richard had one, and Richard said his goal this spring is to help fill that void.

It’s also the chance he’s been waiting to receive. 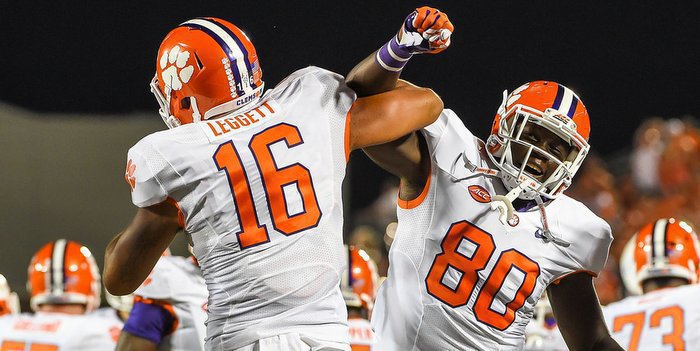 “Really, I am just trying to become that complete tight end. Somebody that the coaches can trust in all facets of the game,” Richard said. “I am not really doing anything different - I'm just preparing hard and understanding the role I'm in. It's a great feeling. It's something I have been waiting for, and now I want to take advantage of the opportunity.”

Richard said the start of spring practice has been just what he expected.

“It's different, but I feel like we haven't missed a beat. We plugged in Kelly (Bryant) and we plugged in Deon (Cain), and we've plugged in me,” he said. “It's not like the offense has disappeared because those guys are gone. Guys have just stepped up in line and have taken off running with it. That is our mindset - we are just throwing the ball around and having a good time.”

What do the tight ends have to do in order to replace Leggett’s production?

“We have to be more consistent. Consistency is one thing that he brought to the table, so anytime we can feel be more consistent is the biggest thing,” he said. “We miss him, but we haven't missed a beat. We just came in and hit the ground running on day one. We're all great friends and push each other and that's what makes the competition so good. I'm hoping to be able to step up and take that role, but that's something that will have to play out over the spring, summer and over the camp.”

Richard’s playfulness during the media session shows he’s comfortable being out front, and he said he wants to become one of the team leaders while learning how to be a better player.

“We have a long time to develop leadership throughout the team. I want to be one,” he said. “You can never learn enough. I'm always trying to learn, even if it is my third or fourth year in the offense. They've been great and they are all competing for the job and that's all you can ask for.”