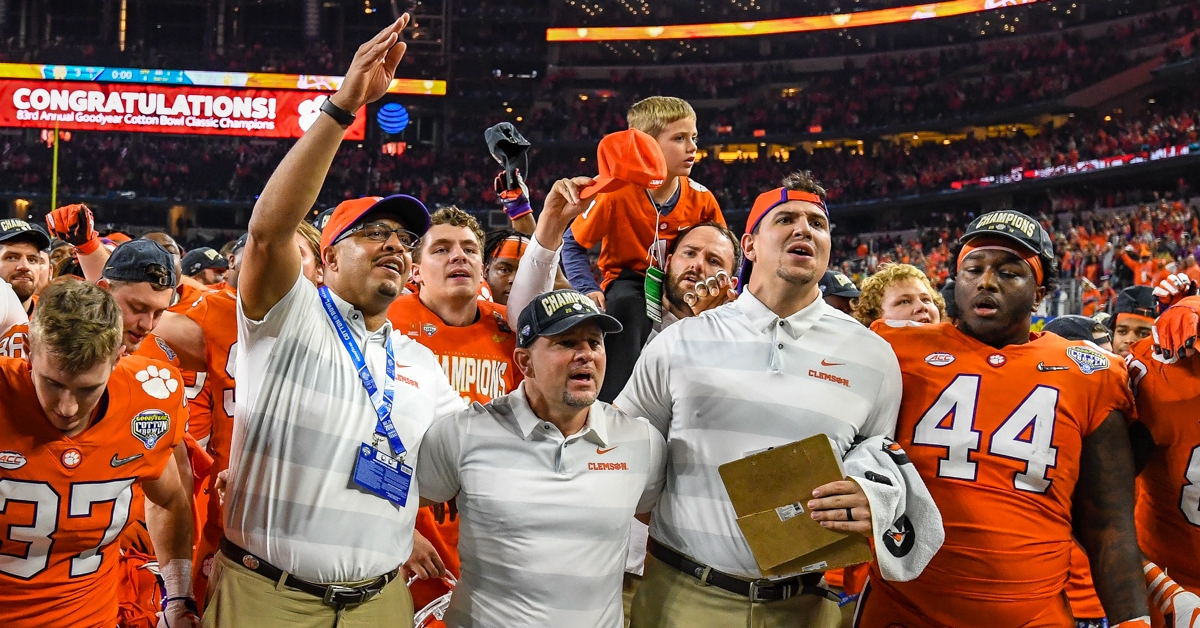 Tony Elliott is no stranger to championship celebrations.

Tony Elliott’s pregame routine never varies. He gets off the team bus and takes in the playing surface

- still in a coat and tie – before retiring to the locker room to change clothes. When he emerges from the locker room, headphones firmly in place, he takes a lap around the field before settling in on a bench to listen to his music and prepare mentally for the game. It’s a routine that’s worked since the night of the Russell Athletic Bowl, his first night as Clemson’s play-caller.

That’s why it was a bit of surprise when Scott exited the Bank of America Stadium tunnel last Saturday in Charlotte and took the time to simply take in his surroundings. No music. No headphones. Instead, he just took in the sights and sounds.

"I have to confess, (this game) was probably the first time I took coach's Swinney advice and decided to smell the roses,” Elliott said. “Typically, I have a pregame routine and listen to music. But today I left the headphones in the locker room and just wanted to take everything in. Really haven't done that over the four previous years. How could I tell these guys to be confident and be who they are and me not be confident? So, I just changed it up a little bit.

"It was really good to just take in all the sights and sounds."

When the regular season ends for college football programs, Elliott’s name surfaces as one of the hot commodities, and with good reason. Saturday night, however, head coach Dabo Swinney told him to stop and smell the roses.

“I really don't like this time of year, because it forces my name to come up. I understand why it's happening,” Elliott said. “But the reason it's happening is because of all those players in that locker room. Turned 40 this year. Had a tough year with C.J. (Fuller) and Tyshon (Dye) and that's really changed my perspective about a lot of things. I have two little boys that are growing up so fast.

"So it has nothing to do with my future as much as man, time is going by really fast, and this could be the last couple times I get to step on the field with Travis (Etienne). And just to think I could remember when he first showed up a couple of years ago and-- just a little guy. And now he's gone on to do unbelievable things. I just wanted to take some time to really enjoy that. There's going to be a time and place for my future and I truly believe that, but today was more about me really appreciating me being with these guys."

One reporter mentioned that Elliott’s named popped on Twitter as a potential candidate for the head coaching job with the Dallas Cowboys, and Elliott laughed out loud at the possibility.

"Do you believe that? Do you believe that? The Dallas Cowboys. Oh, no. I mean that's flattering,” Elliott said. “The Dallas Cowboys. I think that'd probably be a little too much for me to bite off. More than I can handle not having any experience. Not sure how that got out there. Sometimes I think people just want to reach and grab for some things."