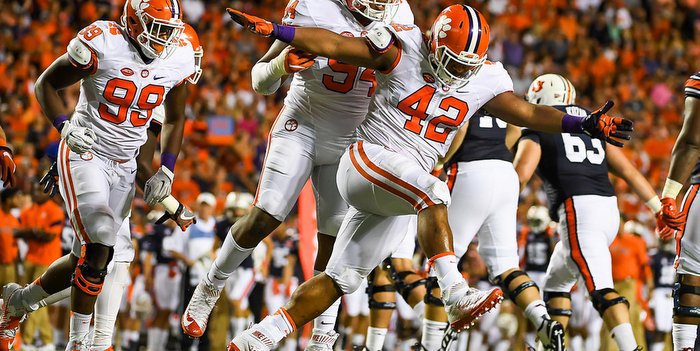 CLEMSON – Slash is ready to take over the role of quarterback.

Defensive lineman Christian Wilkins has proven his athletic versatility multiple times during his 16-game Clemson career, and he got to add to his resume last Saturday when he lined up at fullback on Wayne Gallman’s one-yard touchdown run in Clemson’s 19-13 win at Auburn.

Wilkins played defensive tackle all of last season, but injuries forced a move to defensive end midway through fall camp. Wilkins acquitted himself well at the position and at fullback, adding to the lore that began when he caught a pass on a fake punt against Oklahoma in the Orange Bowl.

“I'm thinking about challenging Deshaun for that QB1 spot. Throw the ball around next. We'll see,” Wilkins said with a mischievous smile earlier this week.

We’re sure Wilkins was kidding – fairly sure – but he told the media that he loves helping his team any way he can.

“I take a lot of pride in that. I'm happy to be able to do it,” Wilkins said. “I'm happy to be able to help the team. That's really the biggest thing and I'm all for that. You've really got to be selfless to be versatile in everything and really just be competitive to give it all you got when you're asked to do a lot of different things. It's a lot of fun. I enjoy doing it and I'm just happy to help the team. If it makes us better, I'm all for it.”

Wilkins even evoked memories of another touchdown-scoring defensive tackle when telling the media that he wants to continue being a part of the offense. 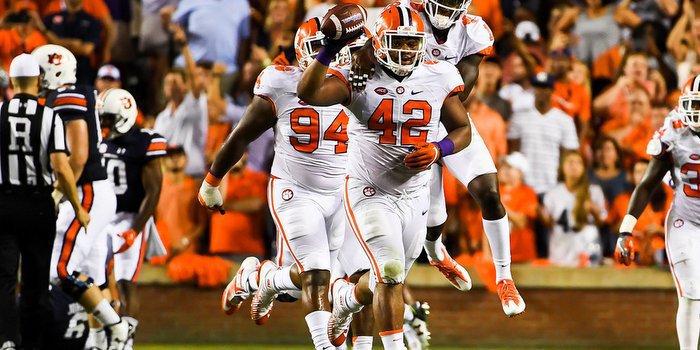 “I'm hoping there is a lot more in store. I hope I get to see a little bit more of that because I have fun going on offense,” he said. “It's a shorter run for me to celebrate when they get in the end zone, than sprinting all the way from the sidelines. That's up to the coaches. I've told the coaches that every time I'm in you score a touchdown, so let's hope that it remains consistent. Maybe get some of The Fridge (Williams Perry) action.”

Clemson held Auburn to just 87 rushing yards and 13 points, but Wilkins isn’t ready to call Clemson elite Not yet.

“Yes, it's clear we had a pretty solid game as a defense, but we can't get too ahead of ourselves. We put a lot of work in to get the result that we wanted as a defense to do some of the things that we did,” he said. “It just shows that we have the potential to really be a good defense this year. We're just going to have to come in every week with a focus to really try and get better, so that we can keep getting that result each week and put on a good performance.”

Regarding the move to end, Wilkins said he didn’t have any problems once the game started.

“I put all I had into it getting ready during the practices and really just tried to get comfortable there, so it would make things easier in the game,” he said. “I played a lot of defensive end in high school, so I kind of had some flashbacks. Once the game was underway, I was in fine.”

“That was really good. I'm really happy for Clelin. I’m glad he got a start and glad he got to play. He hasn't played a game in two years and he is one of my best friends on the team, so I was really happy for him. Just to see that he was able to have some success in his first game. We were asking a lot of him to come in as a red-shirt freshman and have a big role on the team. All of the hard work we put in together in the off-season and all of the extra things we do at the indoor, it's going to all come to show.”

“That guy is just a freak. He's a man-child. There's no other way to describe it. He can just do a lot of different freaky things. People consider me a freak, but he is even bigger and can do a lot of different athletic things too. I assumed there was a reason he was so highly recruited. I knew there was a lot of hype when I met him and now I get to see it every day in practice.”