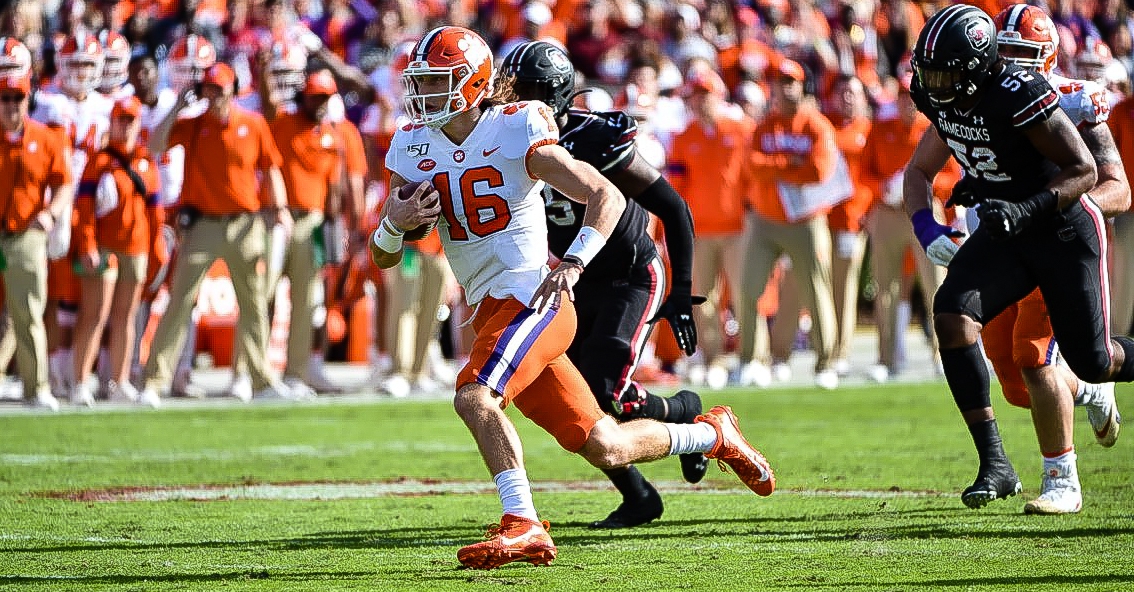 Lawrence had an outstanding day versus the Gamecocks.

COLUMBIA, South Carolina – Six Appeal was alive and well in Columbia Saturday afternoon and it was wearing orange britches.

No. 3 Clemson took a workmanlike approach to the rivalry game with South Carolina and walked out of Williams-Brice Stadium with a 38-3 victory over South Carolina, the Tigers’ sixth consecutive win in the series. Clemson finishes the regular season 12-0 and will face Virginia in next week’s ACC Championship Game in Charlotte. South Carolina’s season ends with a 4-8 record.

Trevor Lawrence was outstanding through the air and on the ground. Lawrence finished the game completing 26-of-36 passes for 295 yards and three touchdowns and carried the ball eight times for 66 yards. Tee Higgins had three receptions for 101 yards and two scores while Justyn Ross had nine receptions for 111 yards and a score.

The six-game streak is the second-longest in the history of the rivalry. The longest is a seven-game streak from 1934-40. Clemson also owns the nation’s longest active overall winning streak (27), home winning streak (22) and road winning streak (12). The win is also Clemson's 10th victory against SEC competition since the start of the 2016 season. Clemson's ten wins against the SEC since 2016 outpace the totals of three active SEC members: Ole Miss (eight), Vanderbilt (eight) and Arkansas (four).

Clemson has won seven straight games by 30 or more points, an ACC-record, since the start of October. It also ties 2011 Houston and 1976 Michigan for the longest streak in the AP Poll era (since 1936).

Clemson's defense held South Carolina to just 174 total yards - the Tigers have held all 12 opponents this season under 300 yards of total offense.

“First of all, I appreciate our fans. We had a great crowd out here today,” head coach Dabo Swinney said. “It was awesome to see a bunch of orange. Second, Happy Thanksgiving to everyone. It’s been a great week. I hope everybody had a great Thanksgiving with family. This is a great day today. Really proud of our team. This is an important game to everybody in the state. I thought both teams handled themselves with great competitiveness and class out there today. To win six of these in a row, I don’t think that’s happened in 79 years. Some of the individual things that happened today were incredible.”

Clemson is on a roll and will take that momentum into next week's ACC Championship.

"It was our 115th win this decade. Only Ohio State and Alabama have 115 wins this decade. We’ve played both of them a few times," Swinney said. "Great for our conference, everyone says we don’t play anybody. We’re 10-1 against the SEC in our last 11. We’ve played some pretty good teams. We take pride in every single game. Travis Etienne, I know he’s not good enough to be a Doak Walker finalist (laughs), but he is the all-time leading ACC touchdown scorer and he’s not done yet. People have missed out on a beautiful career from No. 9. Tee Higgins is the first receiver ever to have 10 TD receptions in back-to-back years. We’re 12-0 for the fourth time in the history of the school.

"The story is our defense. That’s 15 in a row where we’ve held the opponent to 20 or less and that hasn’t happened since 1937; I’m not even sure they had the forward pass in 1937, there probably wasn’t a lot of forward passing in 1937. Super proud of our team; to go into game 13 with a healthy team is a blessing. Can’t say enough good things about Bronco [Mendenhall] and the job he has done at Virginia and I’ve seen it coming. We’re honored to play in Charlotte for our league.” On how important this rivalry game is in 2019… “It’s huge. It’s huge from a national standpoint because obviously if we lose this game, they’re going to kick us out."

Clemson took the opening kickoff and drove down the field in 14 plays, but Etienne’s 4th-and-goal rush was stopped at the one. South Carolina took over on downs and gained a quick first down. Three plays later Derion Kendrick stepped in front of a Ryan Hilinski pass at the 37 and returned his interception 14 yards to the Gamecock 23.

The Tigers forced a quick three-and-out and took over at their own 25 after a punt and penalty. Four plays later, Lawrence dropped a gorgeous pass into the hands of Higgins, who raced past safety, gathered the pass in and walked into the endzone for a 14-0 lead late in the first quarter.

The Gamecocks then put together a 15-play, 76-yard drive that ended with a 39-yard field goal from Parker White. With 7:33 to play in the half Clemson led 14-3.

The Tigers responded in a big way, putting together a nine-play, 90-yard scoring drive. Facing a 3rd-and-9 at the South Carolina 16, the snap was low but Lawrence picked the ball off the grass and lofted a pass to Ross in the corner of the end zone. The play was originally ruled incomplete, but video review showed Higgins got a foot down in bounds and Clemson held a 21-3 lead with 3:04 to play in the quarter.

Clemson forced another punt and took over at its own 35 with 1:17 to play in the half. Seven plays later, B.T. Potter hit a 46-yard field goal as time expired and Clemson led 24-3 at intermission.

The Clemson defense forced another 3-and-out to start the second half and the Tigers took over at their own 31. Nine plays later, Etienne raced around the right side for a two-yard touchdown run and with 9:59 to play in the third quarter the score was 31-3. With that touchdown, Etienne tied James Connor (Pitt) for the ACC record for both career rushing and total touchdowns (52 and 56).

A four-yard completion to J.C. Chalk earlier in the drive was Trevor Lawrence's 16th consecutive completion, breaking Cullen Harper (15 vs. Central Michigan in 2007) and Kelly Bryant's (15 vs. Miami in 2017) school record for consecutive completions in a single game. The streak ended on the ensuing drive T at 18, tying ACC single-game records held by Virginia's Michael Rocco (vs. Miami in 2012) and North Carolina's Mitch Trubisky (vs. James Madison in 2016).

The Tigers put together another long drive following another South Carolina punt. The drive covered 84 yards and went 13 plays and ended with a three-yard run by Etienne. The touchdown gave Etienne the ACC career record for career rushing (53) and total touchdowns (57). With 11:56 to play in the fourth quarter, Clemson led 38-3.

Clemson vs. South Carolina Stats
Get the latest Clemson gear right here!
Comment on this story