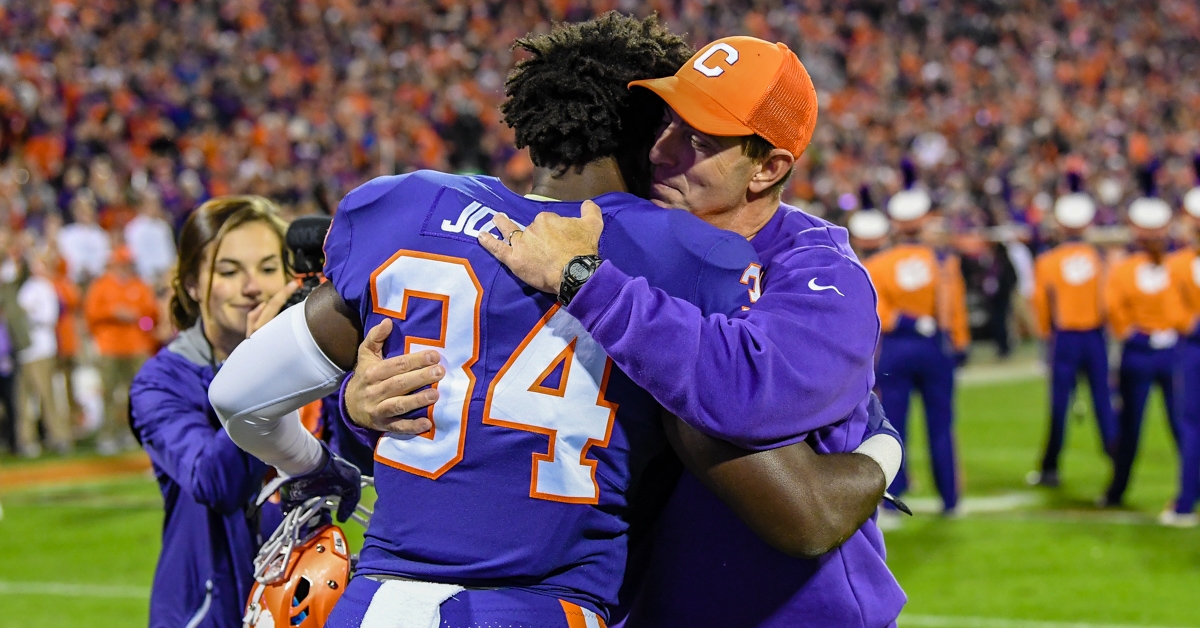 CLEMSON – Sometime after 3 p.m. Saturday, members of Clemson’s senior class and eligible juniors will stand at the top of Death Valley’s iconic hill and start their last jaunt down as a player. It’s an emotional time for those players, their families, and the coaches, and you can bet that more than a few tears will be shed.

Even a big old offensive lineman like Gage Cervenka.

"Oh I'm probably going to cry. I just feel like time has flown by,” Cervenka said earlier this week. “This has been a dream of mine. I'm trying not to think about it because I don't want to affect my preparation for the game or my play, but I'll definitely be emotional.

"It's life-changing. I've been blessed to come in at a wonderful time. I mean, this is seriously some of the best years of Clemson football and we're just getting started. It's changed my life. I've gotten two degrees. If I didn't have football, who knows what I'd be doing? I probably wouldn't be in college, I can tell you that. I wouldn't change anything for the world."

Senior safety Tanner Muse already knows he will be emotional.

“I haven’t really thought about it too much because I know I’ll get tore up, I’ve been here so long,” Muse said. “Probably when I look and see my mom and dad down there, it’ll probably hit me pretty good and I’ll get all emotional. I don’t like to, but you know, it’s a part of it.”

Muse said it was hard to put his Clemson career into perspective at this point, but he hopes to be able to share his accomplishments with his children one day.

“Probably when I get my own kids, show them what dad did with the team. When you pick a school you just want to pick a good fit,” Muse said. “I thought coach (Dan) Brooks, he recruited me, he was just a good fit for me, and I related to him very well.. So, I’ve been blessed beyond to be able to be in these big-time games and the experiences I’ve had and all the different cities, seeing everything, it’s been magical really.”

Offensive lineman Tremayne Anchrum says he wishes he could tell his younger self that the Clemson experience will work out in is favor.

"I think it's going to hit me. It hasn't really hit me yet, but it's going to hit me really differently when I come down the hill the last time,” Anchrum said “I've had such a special experience here that can't be replicated. I can visualize my 17-year-old, 18-year-old self coming in here and being so shy and worried. If I could say anything to my kid self, I would say don't worry, it's going to be a good one.”

Safety K’Von Wallace wants to remember the moments he spent with his brothers.

“The moments I had with the guys. The memories I have in Arizona, Dallas, and Louisiana. Those moments that you will remember forever and take to the grave,” Wallace said. “Just building a bond with the team and the coaching staff. The players, managers, no matter who they are… I’m a kid from Richmond, Virginia. Little dream that actually came true. I always dreamed of being in front of cameras and lights and talking about how good of a player I am or how an opponent is or anything of that nature. It’s a special place in my heart that I have for this game, for this program…I’m very thankful. I’m very blessed. It’s not for me though. It’s for the kids back home. Give them hope and know that this can be possible with God.

“Man, it’s going to be an emotional feeling. Me being here for four years, getting my degree in December. It’s special just playing in Death Valley and winning a bunch of games, being appreciative of every moment I have there. A lot of great things happened on that field. So many memories that I’ll never forget.”

Junior running back Travis Etienne hasn’t decided if Saturday will be his last time running down the hill, but it seems likely an NFL career beckons.

“Honestly, I don’t know. I haven’t really been thinking about much after this season,” Etienne said. “I’m trying to focus on each game. It’s crazy to think that I could be in that position, but I just have to sit down with my family and look at what the best option is for me going forward.”