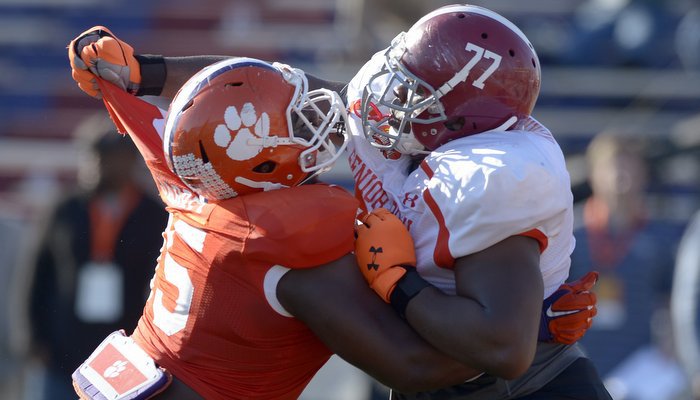 Grady Jarrett
Sr. Defensive Tackle
#50 6-1, 290
Conyers, GA
View Full Profile arrived at Clemson with a chip on his shoulder, determined to prove that he was deserving of a Division 1 offer and could play in the Atlantic Coast Conference. Four years later, Jarrett is having to prove himself again, this time to the NFL.

This week at the Senior Bowl in Mobile, AL, Jarrett is having to prove himself yet again, and the first obstacle he hurdled was at the weigh-in when he proved to be taller than many expected, checking in at 6-1, 288.

According to one observer, Jarrett was one of the most impressive to check in.

Another scout had his own take.

“Clemson DT Grady Jarrett is a complete tweener at 6’ and 288 pounds,” said RealGM’s Jeff Risdon. “He’s functionally strong and has a quick first step, but it’s hard for guys that light to play 4-3 DT and equally as difficult for guys his height to play 5-techinque in a 3-4.”

One NFC General Manager, however, said that Jarrett's size shouldn’t be an issue.

"Teams have different philosophies about size up front on defense, but if a player is tough and strong, then I think he can play in our league. Aaron Donald proved that," the GM said.

According to Rotoworld, an NFC scout compared Jarrett to Donald with less pass-rushing ability earlier this season. "Jarrett is undersized by NFL standards at just under 6-foot-1 and 288 pounds, and he certainly will be scratched from the draft boards of teams who covet mass from the nose position," observed NFL.com. "While he isn't Donald, the 13th overall pick of the Rams in the 2014 NFL Draft, he is extremely quick off the snap and plays with good leverage and strength. He's had some outstanding reps in practice this week, and the success Donald has enjoyed as a rookie is likely to help Jarrett's case despite his lack of size."

Jarrett then took his production to the field.

“Clemson defensive tackle Grady Jarrett had a great day,” Optimum Scouting’s Eric Galko said. “He has quick feet that allow him to change directions quickly, and showed enough burst off the snap to be a headache for opposing linemen. He has good power to his game as well, pulling down (Alabama’s) Arie Kouandjio twice during individual drills.”

Jarrett told the media following Wednesday’s practice that getting a chance to play in the NFL is due in large part to the coaching he received at Clemson.

“I just feel like they are the best in the country. They just have a way of working together,” Jarrett said. “Coach V (defensive coordinator Brent Venables

Brent Venables
Def. Coordinator / Linebackers
View Full Profile ) really transformed me during my time at Clemson. Coach (Dan) Brooks did a great job of coaching me technically, and I have an edge because of the way the coaches taught me and were hard on me. I feel like I definitely have had one of the greatest coaching staffs.”

Asked what kind of player he thinks he will be on the next level, Jarrett said he thinks he can be the playmaker he was in college.

“I feel like I will be a really disruptive player,” Jarrett said. “I am strong and powerful and I like to make plays. As far as improving, I would like to just improve on every aspect of game and get better in all the different areas.”