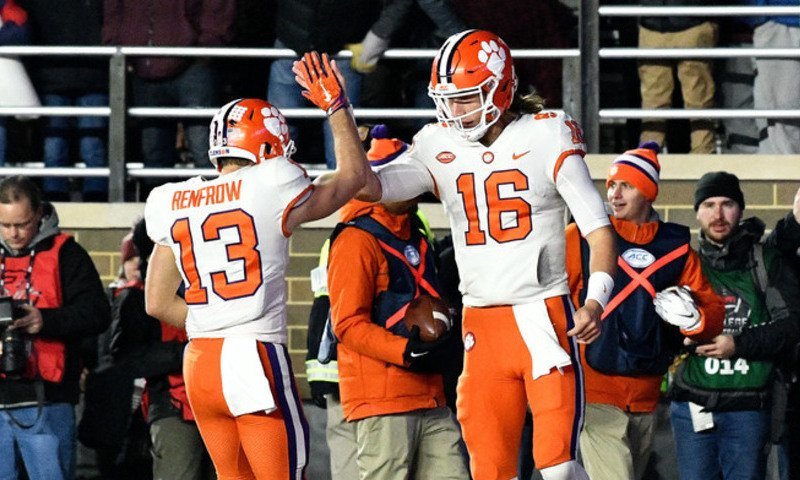 The cold didn't bother Trevor Lawrence with a passing and rushing touchdown in a game where the Clemson defense made things easier Saturday.

Defense led the way, the offense did enough and special teams contributed to the scoreboard (on both ends) as No. 2 Clemson rolled on to a 10-0 start at Boston College Saturday.

This season the ‘Second Look’ features the TigerNet staff grading Clemson as a group and offering some different perspectives on the action each week. Here’s our look at game ten as Clemson punched its ticket to Charlotte.

The Clemson offense that coasted to 240 points over its previous four games found the going a little tougher on The Heights Saturday night, but still found a way to get the job done.

The Tigers wound up with 424 total yards, including 129 yards on 30 carries on the ground. Perhaps a little concerning is the fact that running back Travis Etienne had just 11 carries on the night. The offensive coaching staff continues to call for RPO’s (Run-Pass-Option) and the Boston College defense made quarterback Trevor Lawrence carry the football instead of Etienne, and Lawrence wound up with nine carries.

Lawrence won the game MVP with a 29-for-40 performance, throwing for 295 yards, a touchdown and an interception. Wide receiver Hunter Renfrow had one of his best games of the season, hauling in eight catches for 80 yards.

The Tigers were just 5-of-15 on third down, and there were enough mistakes to fill a small book (Amari Rodgers failing to get out of bounds late in the first half, the right side of the line had trouble containing Boston College defensive end Zach Allen, etc.) but still managed to win the game. -- David Hood

BC blows up a screen on second down, and then Zach Allen logs his second pass breakup of the night on 3rd-and-19, forcing a Clemson punt. pic.twitter.com/lZeEUwwUKg

Trevor Lawrence surveys the field, shuffles backwards--doesn't like what he sees--and tosses the ball out of bounds to set the stage for a 23-yard Clemson field goal. The Tigers lead, 13-7. pic.twitter.com/NA758iyhE8

Facing a 3rd-and-8, Trevor Lawrence drops a dime to Derion Kendrick. The freshman wideout cuts back inside, evading both Hamp Cheevers and Will Harris, picking up 32 yards in the process. pic.twitter.com/CZSHHuTVAa

The trip to BC was built as a test in toughness and the Clemson defense showed itself to be not only the more talented side but also every bit as physical or more.

The tone was set early and the course of the game was unmistakably changed when Christian Wilkins’ hit on Eagles starting quarterback Anthony Brown knocked him out of the game (and eventually sent the sophomore to the hospital).

A run-centered BC offense was that much more single-minded and Clemson pounced on that opportunity - fitting the Eagles’ run lanes and getting in the backfield to stop preseason ACC player of the year AJ Dillon and company from getting any kind of momentum on the ground. The Eagles didn’t have a single run of 10-plus yards after averaging six per game coming in (2.5 per game of 20-plus yards).

The yards per play total was Clemson’s lowest allowed this season (1.98) and the best versus an ACC opponent since 2014 (1.86; Wake Forest).

With just about seven minutes remaining, E.J. Perry and the Eagles' offense takes another step back. Kendall Joseph bursts through the trenches for a sack, throwing a wrench in BC's series. pic.twitter.com/5JD7wtE8xd

A focused, veteran group with some young playmakers continued to show why Clemson has a defense rated No. 1 in efficiency (ESPN) - and there are no signs of this group slowing down. -- Brandon Rink

The talented sophomore received had one of the game’s biggest plays when he took a punt 58 yards for a touchdown, the first touchdown for a Clemson returner since Ray-Ray McCloud did it last season. Rodgers' other four returns had a net of just four yards.

Kicker Greg Huegel was good on both of his field goals, and BT Potter did a credible job of kicking off into the wind.

The Tigers attempted a rugby punt early in the game that Eagle return man Michael Walker returned 74 yards for a touchdown. The ball was held a second too long and the Eagles were able to set up the return. The Tigers averaged 37.3 yards per punt on six punts.

For the special teams it was another mixed bag. -- David Hood