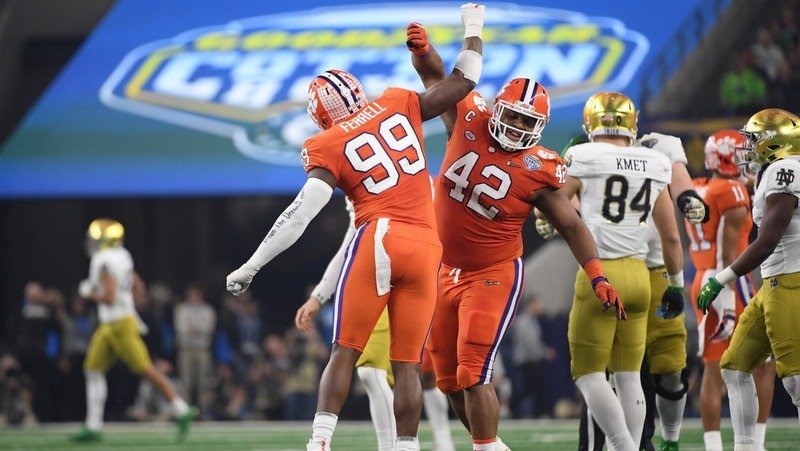 Clemson posted one of its best defensive efforts of the season when it counted down a key member of the group.

No. 2 Clemson punched its ticket to the National Championship Game in style with a dominating win over No. 3 Notre Dame in AT&T Stadium Saturday.

Dabo Swinney's Tigers posted the biggest offensive effort yet on a top-5 Notre Dame defense and defensively gave up the least yards of any team to the Fighting Irish this season.

This season the ‘Second Look’ features the TigerNet staff grades for Clemson averaged as a group and offers some different perspectives on the action each week. Here’s our breakdown the Cotton Bowl:

That second quarter was a killer of leprechauns.

Clemson and Notre Dame were tied at 3-3 at the end of the first quarter, but a frenzied second quarter put the game out of reach. Clemson had just 45 yards of offense at the end of the first quarter as the Irish mixed coverages on the second and third levels. It was at that point that co-offensive coordinators Tony Elliott and Jeff Scott started to use the middle of the field, softening up the Irish defense.

It also helped that Notre Dame starting corner Julian Love went out with an injury, and quarterback Trevor Lawrence took full advantage. When the final gun went off at the half, the Tigers had scored 20 points and rolled up an astounding 261 total yards in the second quarter alone.

Lawrence was 13-of-15 for 229 yards and three touchdowns in the quarter.

That opened up the running game and the Tigers ran for 169 yards in the second half, bludgeoning the Irish with hammer blows that broke their will.

It might not have been the number of points that Clemson fans are used to, but the offense still ran up 538 yards of offense. And, to be fair, there was no need to take chances after the half. If the Tigers had wanted to add on, I am sure there could have been points in bunches. Instead, the second half didn’t reveal too much to Alabama.

It was one of the best-called games of the year. -- David Hood

The obvious storyline coming in was the effect of losing Dexter Lawrence for a Playoff semifinal versus a quality Notre Dame offense. Clemson’s defensive depth built over the last couple seasons shined on that stage with a dominating performance.

With senior Albert Huggins stepping into a key role beside Christian Wilkins, Clemson held the line versus the run and pressured Notre Dame QB Ian Book as much as any opposing signal-caller this season.

Notre Dame became a 10th team Brent Venables’ group held under three yards per carry this season (2.5) and his Tigers tied a season-high with six sacks and five more QB hurries. Huggins and Nyles Pinckney didn’t post big numbers statistically but they were in position to clear the way for teammates to step up and log eight tackles for loss and hold the Fighting Irish to the season-low in yards and points.

The constant pressure and multiple looks in coverage had Book hesitant on pulling the trigger on downfield throws and off-the-mark in others where he had open receivers. When they did push the ball into Clemson territory, the Tigers defense didn’t break - giving up only three points in five Notre Dame possessions across midfield and forcing two turnovers.

The game was decided by the time of this play, but when it came to Clemson and Brent Venables creating pressure, this pretty much summed the whole thing up. pic.twitter.com/affFX7rYXI

Once again, it was a masterful plan from Venables in a CFP semifinal and now the attention turns to a team in Alabama that nobody has had a handle on this season. -- Brandon Rink

Hey Tigers, if you want to beat Alabama next week the special teams will need to be cleaned up.

Last Saturday’s special teams effort was a mixed bag. Punter Will Spiers responded from an early 32-yard punt and put together a solid day, averaging 39.8 yards per punt. However, Greg Huegel missed from 49 yards after hitting a 40-yarder, and an extra point was blocked.

Amari Rodgers had two punt returns for just 10 yards, and kick returner Derion Kendrick fumbled on a return that might have given the Irish early momentum. A review overturned the call on the field of a fumble, but special teams haunted the Tigers in the title game loss to the Crimson Tide three years ago and special teams will once again be on display.

They were OK against the Irish, but OK won’t cut it next week. -- Nikki Hood