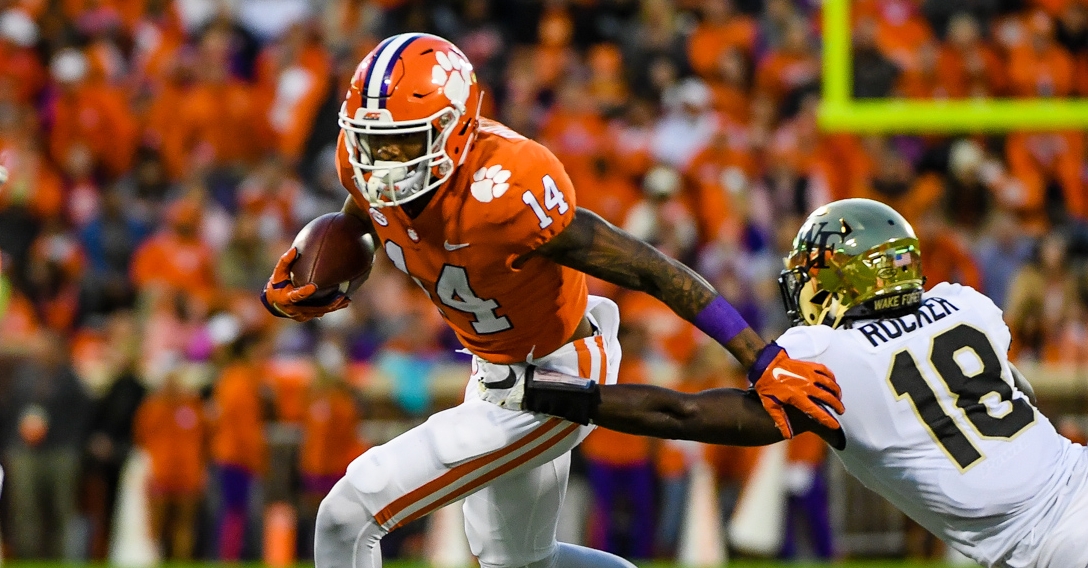 Clemson's passing game is hitting on all gears right now.

Clemson wrapped a dominant run through the ACC regular season with a 52-3 win over Wake Forest on Saturday.

TigerNet tackles game No. 11 for the Tigers with the key takeaways and game grades.

What we know about Clemson football (game-week 11)

* The fourth quarter’s start in Death Valley has been marked in recent seasons by a motivational video voiced by Clemson strength and conditioning director Joey Batson to fire up the team and crowd. The utter domination by the Tigers has taken away some of its juice this year -- with a number of fans already back at the tailgate or on the road by its start. Clemson averaged a 44-7 score going into the fourth quarter at home this season, with Saturday’s effort emblematic in a 45-3 edge on the Deacs after three periods.

ESPN’s broadcast lauded A.J. Terrell and Derion Kendrick’s lockdown coverage against the disadvantaged Deacs receiver corps Saturday, missing two of their top-three targets. Senior Tanner Muse played like a man possessed on his Senior Day with his fourth pick of the season, two tackles for loss -- a sack in that mix. Wake Forest emphasized the ground game early and often and were held to just 1.7 yards per carry -- only creeping over 100 yards of total offense late in the game. It was another work of art from Venables’ group.

The only real issue on offensive side was a season-high three sacks allowed from a team in the top-5 versus sacks given up going in. Lawrence had plenty of time on several throws but Wake Forest was able to mix up some pressures -- and just outright beat their man -- to get hits on Lawrence. The total would have been a little higher if not for Lawrence being strong enough to find some outlets while being dragged down.

Overall, Lawrence was as crisp as he’s been all season and none more evidenced than the connection on the first of two late-half TDs to Tee Higgins:

Lawrence apparently got his wild plays out of his system in the first quarter versus Louisville and he’s been nails ever since. That, combined with a tremendous stretch for Travis Etienne, has meant a dominant Clemson offense. -- Brandon Rink

I think Clemson is the best team in the country. The offense is playing lights out and the defense is incredible. I've seen LSU play and I've seen Ohio State play and those teams are really good, but I don't think either one can beat Clemson. However, the one thing that scares me is Clemson's special teams.

Watching Wake Forest punter Dom Maggio boom punt after punt after punt and flip the field on the Tigers was something to see. He's a weapon for the Demon Deacons, and it seems like every team Clemson plays has a punter that looks like the second coming of Ray Guy.

Clemson punter Will Spiers started out the 2019 season much like he did the 2018 season - good but not great - but like last season has regressed. He has punted just 34 times, and has an average that is a little over 42 yards, but his inability to hit a big kick when needed is concerning. -- Nikki Hood

* Midway through the third quarter of Saturday’s blowout over Wake Forest – during one of the long delays in televised football games – I thought back to former Clemson linebacker Stephone Anthony’s commitment ceremony.

Anthony told the anyone that would listen that, “Clemson is coming.” Anthony and Tony Steward and a bevy of other high-profile recruits like Sammy Watkins gave Clemson some credibility heading into a 2011 season that saw the Tigers win the ACC. Despite Clemson having that first breakthrough season and a few more, it was always that Clemson was still coming.

Wake Forest head coach Dave Clawson stood outside the visitor’s locker room Saturday and said Clemson is the best team in the country. I spoke with one of the Wake Forest staff who said that even if the Demon Deacons had wide receivers Sage Surratt and Scott Washington, the final score wouldn’t have been much different.

“Clemson is just on a different level than anybody else right now,” he said. “They’ve been really good for a long time and I know they have two titles in the last three years, but this team is playing on some other plane. They’re scary.”

Lawrence is playing like the No. 1 player in the country he was proclaimed preseason in an offense hitting on all gears right now.

Clemson continues to rise to challenge - small, medium or large - and plays to its insanely-high standard set from over the last couple seasons from defensive coordinator Brent Venables.

An off night all-around for Clemson’s punting -- ranging from a fumble in Tigers territory leading to Wake’s only points, ugly looking attempts and even a late illegal formation penalty -- overshadowed a strong effort in the return game. Amari Rodgers set up the first Clemson score with a 53-yard punt return and Derion Kendrick logged a kick return of 32 yards.