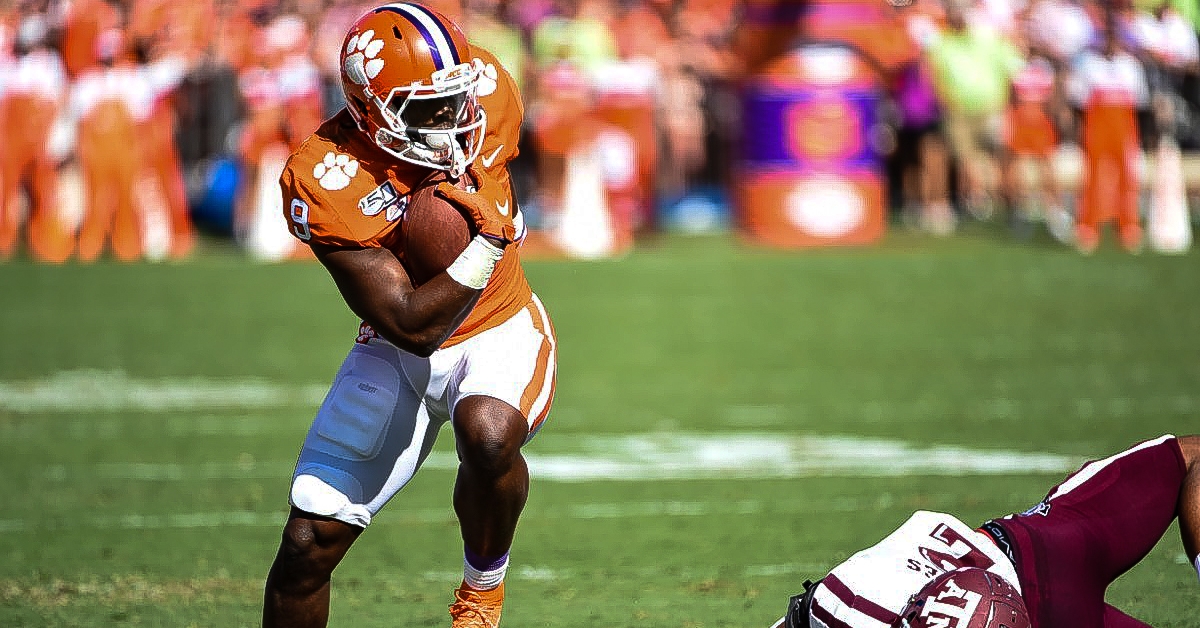 Justyn Ross saw 14 targets and caught seven for 94 yards and a touchdown.

No. 1 Clemson extended the program's unbeaten run to 17 games by controlling the action late in a 24-10 win over No. 12 Texas A&M.

TigerNet tackles week two for the Tigers with the key takeaways and game grades.

What we know about Clemson football (week two)

Brent Venables walked into the interview area after the game and used that word to describe the narrative after the Tigers allowed 501 total yards to Texas A&M in 2018. That rhetoric didn’t sit well with Venables or the remaining players, and Venables went to work devising a plan to stop the Aggies, essentially taking away the middle of the field Texas A&M exploited in 2018.

There was linebacker Isaiah Simmons playing deep safety. Safety K’Von Wallace played in the slot. Safety Tanner Muse moved up to play a variation of the WILL linebacker. Nolan Turner was all over the field.

There was what looked like a 2-3-6 early. There were 3-3 looks and 3-4 looks and dime packages and nickel packages. There were zones and blitzes and man coverages. It was obvious early on that the head of A&M quarterback Kellen Mond was swimming.

Mond was hit early and often and came to postgame interviews with two gashes on his face, courtesy of Wallace.

It was that kind of game for the A&M offense, which rushed for 53 yards on 27 carries despite some early success.

The final result was a final score of 24-10 that didn’t fully represent just how dominant Clemson was on Saturday. Once it was obvious that A&M’s offense was going to struggle, the offensive coaches went back to a predictable and careful game plan.

The offense is going to be good. Really good. There were signs Saturday that it is getting ready to explode. The questions, however, were about the defense, and it looks like “rhetoric” has helped created another dominant unit. - David Hood

* There’s a lot of good to point to on the defensive side of the ball for Clemson, starting with the secondary.

The three-safety look employed by Venables helped contain a Texas A&M passing game that torched Clemson last year for 430 yards. A year removed from giving up 10 passes of 20 or more yards versus the Aggies, the Tigers didn’t surrender a single pass of over 20 yards on Saturday. It wasn’t a perfect performance and A&M missed a half-dozen-plus opportunities in the passing game but Clemson’s scheme and execution kept them contained.

A week after totaling a team-high 10 stops versus Georgia Tech, Simmons was all over the field and often in the middle of that three-safety look -- Venables using his most athletic defender brilliantly as someone who could make a play anywhere on the field. And the Aggies had to take note of where he was.

Safeties K’Von Wallace (9 stops; sack), Nolan Turner (four stops; two pass breakups; forced fumble) and Tanner Muse (three stops; interception; pass breakup) were all up for the task. Turner had an early missed tackle out in space and recovered well for some game-changing plays. Muse showed off his athleticism in particular in recovering to chase down a receiver on a screen pass for a solo tackle.

Out on the islands, Derion Kendrick saw his most targets in his young career as a Clemson corner and performed well. He brought down six Aggies, three on solo tackles, along the way. A.J. Terrell factored in the Tigers’ extensive blitzing and grabbed a share of a sack with Xavier Thomas, had a QB hurry and also broke up a pass.

Dabo Swinney reiterated his belief that the back-seven will be a strength this season for the Tigers this week and there were certainly signs that that can be true in 2019.

On offense, Swinney said postgame that Trevor Lawrence managed the game well versus some different schemes that Texas A&M was throwing at them. He wasn’t quite as sharp on the read-option calls as the opener but did use his improved strength in the running game to punch in another score -- scoring on the ground in consecutive games for the first time in his college career.

Lawrence’s touch passing had its inconsistencies but did further show the caliber of talent he and the Tigers have at receiver. Some of the near-catches were almost as impressive as the catches for talents like Tee Higgins and Frank Ladson Jr. downfield.

Clemson had to account for A&M trying to clog the middle again for Travis Etienne and were creative in getting him the ball in the passing game, with the junior topping the 100 yards from scrimmage mark for the first time without a 100-yard rushing game (52 receiving yards on four catches; 53 rushing yards on 16 carries). And the Tigers didn’t lose step -- and at points -- looked to hit another gear with Lyn-J Dixon on the field, averaging 7.2 yards per carry with a touchdown.

Overall, the Clemson offense hasn’t quite put everything together -- and that’s got to be a scary proposition for opposing defenses going forward. Something we may see as soon as next week in the Carrier Dome.

On special teams, what stood out most to me was where Texas A&M had to start its drives. With B.T. Potter’s touchbacks on kickoffs and solid attempts from Will Spiers in the punting game, the Aggies averaged a starting field position of their 26, only beginning two possessions outside of their 30. That fed into Clemson’s strategy of making A&M methodically move down the field and Mond and his receivers weren’t consistent enough to do that Saturday. - Brandon Rink

* We’re so used to seeing Brent Venables’ defensive linemen in the backfield and harassing quarterbacks all game, so when he uses three down linemen and six defensive backs, it takes a few minutes to process what we’re seeing. What Venables was able to scheme up and ultimately what his defense was able to execute isn’t being talked about enough. Venables put his best players out on the field and forced Mond and the Texas A&M offense beat them through the air.

Venables knows the strength of the defense – right now – lies in the back end – Wallace, Simmons, Terrell, Kendrick, Muse and Turner. He’s putting the onus on that back seven and giving his young line and rather inexperienced linebackers time to grow up. The ability to scheme to his defense’s strength and essentially show no drop off from a defense a year ago that lost seven starters is the reason Venables is the best in the business.

Offensively, there were still some missed plays by Trevor Lawrence and the receivers but once Dabo Swinney, Tony Elliott and Jeff Scott realized that Texas A&M couldn’t score, they essentially shut it down and decided not to show anything more than they had to.

Looking at what Maryland did to Syracuse, next Saturday night in the Dome may be the offense’s coming out party. - Nikki Hood

We’ve seen glimpses of what this group can do -- and as hinted to in the analysis above -- we might not be all that far from seeing a more complete effort ahead.

The change year-to-year in defensive efficiency versus a Texas A&M offense with ample weapons shows just how much Venables is earning his salary -- and driving up that price even more moving forward.

B.T. Potter pushed his one lengthy field goal attempt (47 yards) to the right and the return game wasn’t a factor, but the overall effort when it comes to field position and containing the opposing returning game makes it another solid performance from this unit.