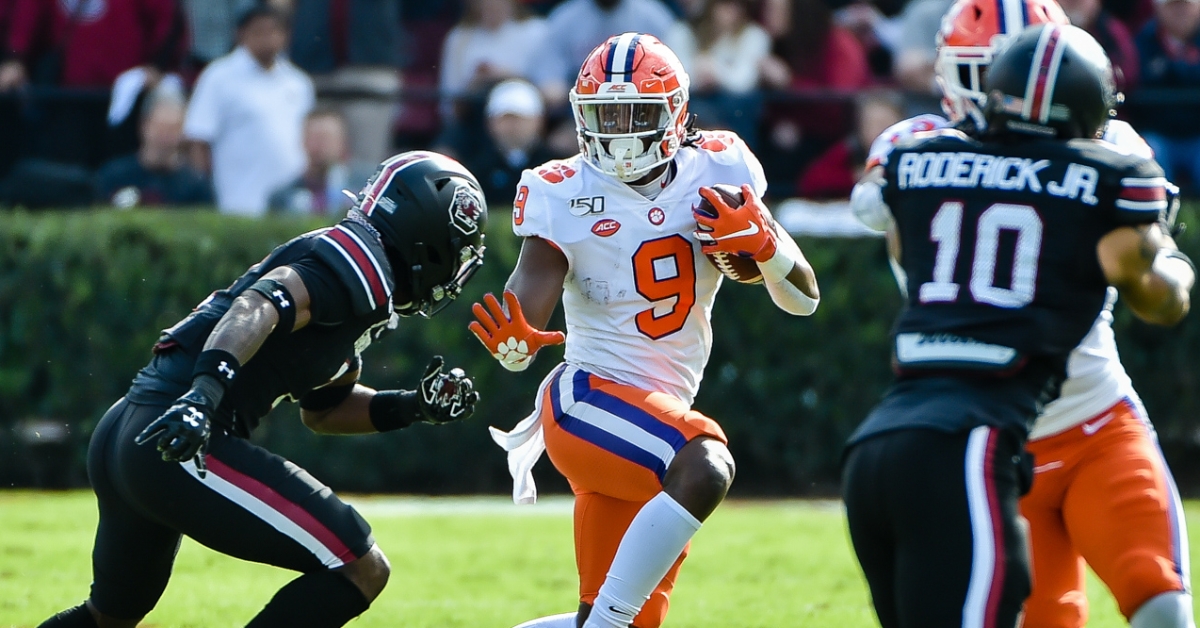 Lawrence impressed with his ability to make plays on the go versus South Carolina.

Clemson stretched its series streak to six games with a dominant effort at South Carolina on Saturday.

TigerNet tackles game No. 12 for the Tigers with the key takeaways and game grades.

What we know about Clemson football (game-week 12)

* Remember all of the concern nationally over Trevor Lawrence’s play around midseason? Seems crazy now, right?

After averaging an interception once every 25 passes through 6 1/4 games, Lawrence hasn’t thrown a pick in his last 147 pass attempts -- averaging a touchdown every eight throws in that span.

His pocket awareness and escapability have been off the charts and that’s led to a pair of career-highs in rushing yards -- a team-best 66 yards on Saturday -- over the last six games. Lawrence’s athleticism plus a largely veteran O-line group has the Tigers in the top-5 in sacks allowed per contest this season (4th; .92).

He tied an ACC record with 18 consecutive completions at one point versus the Gamecocks, which started with touchdown passes on back-to-back throws to Tee Higgins. That began with the Clemson defense complementing them well with an interception after being stopped at the goalline on the opening drive.

Lawrence said postgame he felt was “a lot better of a football player” at this point from where he was last year -- and it shows. He is going to give defensive coordinators a lot of headaches over the final few games. 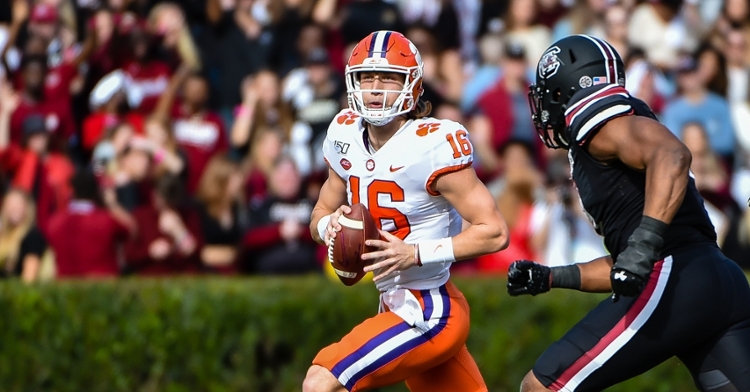 Lawrence impressed with his ability to make plays on the go versus South Carolina. "

* A friend sent me a link to a South Carolina message board last week in which the fans were saying that they felt like South Carolina had a better chance of winning the annual rivalry game than people were giving them credit for. The thought process was that Clemson’s defense was vulnerable and not nearly as good as the defense that led the Tigers to a National Championship last season.

Someone else has fallen into the trap of thinking Brent Venables’ group isn’t the nation’s best.

Heck, the Tigers have played 12 games and ESPN sideline reporter Tom Luginbill couldn’t help but mention the Power Rangers during Saturday’s broadcast. It’s almost as if people can’t move past that stellar group and see what the Tigers have this season.

Dabo Swinney let everybody know during a teleconference Sunday and Virginia head coach Bronco Mendenhall doubled down on those comments on the same teleconference.

“The talent base at every position has been crafted at a really strong level that matches the style, system and schematics of the design,” Mendenhall said. “You have a really nice blend of leadership with scheme and personnel and experience. That then forms culture and tradition.

“This group I think is the next version and probably the strongest version that I've seen. I have studied Clemson before defensively and have been impressed with not only the scheme but the innovation and the ideas they have.”

The Tigers held the Gamecocks to just 174 yards, and except for a 15-play drive that netted 75 yards, the Gamecocks had 38 other plays that netted just 99 yards. That’s dominance. And the Power Rangers are doing their thing in the NFL. -- David Hood

* It doesn’t matter who they’re playing, Clemson’s defense continues to impress, and it’s not just one or two players.

Sure, Isaiah Simmons has played his way into a first-round NFL Draft pick, K’Von Wallace and A.J. Terrell are having outstanding years as well, but this defense in its entirety relishes every opportunity to make a statement to those who doubted them during the preseason.

Defensive coordinator Brent Venables was almost sentimental during his postgame press conference after the defense held South Carolina to just three points and less than 200 yards. He wanted to point out that it wasn’t just him as a coach or a couple of players that made this year’s defense special.

It was guys that nobody expected much out of – Chad Smith and the linebacker corps, Jordan Williams and Justin Foster on the defensive line. It’s the entire staff – all of the position coaches, the graduate assistants, the scout team.

It doesn’t matter what style of offense Clemson faces, Venables and crew have a plan and are multiple in everything that they do. I think that’s what’s made this group so special. They change up what they do – whether is a four-down front, where Simmons is lining up, etc. – from game to game and even from play to play.

This has been Venables best coaching job to date and I would venture to guess this will go down as one of his most special seasons as defensive coordinator. -- Nikki Hood

You start to run out of superlatives for what Venables and this Clemson group have done this season, but this game featured a fourth Power 5 team -- and a second in a row -- held under 200 offensive yards. Since allowing the season-high point total at UNC (20), the Tigers have allowed only 8.7 points per game. Clemson’s November featured the No. 1 total defense (206.3 YPG), allowing 37 yards fewer per game than the next team, and the No. 1 scoring defense (7.5 PPG), allowing just under 3 PPG less than the next team.

It was an overall strong effort from the majority of the Clemson special teams group with all three punts landing inside the South Carolina 20 -- one downed inside the 5 by A.J. Terrell, a 32-yard kick return from Etienne to start the game and no returns given up from the Gamecocks. BT Potter hit his first attempt (46) but sent a 32-yarder wide right. He is now 10-of-17 on field goal attempts this season.