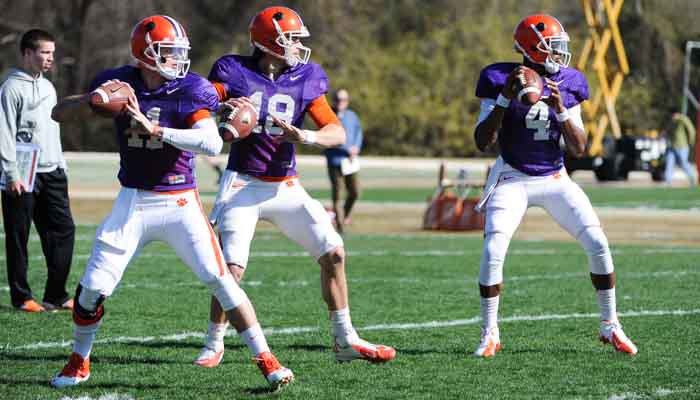 Dabo Swinney
Head Coach
View Full Profile , who took the purple “no contact” jerseys off all three of his quarterbacks as the coaching staff endeavors to get a better read on the competition that features Cole Stoudt

“It was good for both sides of the ball,” Swinney told the media after the scrimmage. “The offensive line played with pride today and it carried over to everyone on that side of the ball. The defensive line got exposed in some ways. What was called an easy sack previously, was not a sack today.”

Swinney said he was pleased with the quarterbacks on Monday. The four signal callers (Cole Stoudt, Chad Kelly, Deshaun Watson and Nick Schussler) who saw action in Monday’s scrimmage were a combined 27-48 for 379 yards and four touchdowns. That computes to an efficiency of 151.0 None of the four had an interception and in fact the offense did not commit a turnover in the 100 plays that were run.

“Ammon Lakip continues to stand out. He had another day in which he did not miss a kick. I have put him in all kinds of situations and he has delivered every time.

Chad Morris
Offensive Coordinator / QBs
View Full Profile told us that seeing the quarterbacks “live” was something he begged Swinney to do.

"That was critical for us, putting those guys live,” Morris said. “We had talked about it. Coach Swinney and I had talked about it before spring even started. It's always a tough situation. It's always 'Should you? Shouldn't you?' But I think there was a consensus, and we both agreed, 'Let's make these guys live. It will help them. It will help our offense. It'll help the defense.'"

*Morris said he liked what he saw out of Watson.

"First time he's been live since a playoff game a few months ago in high school,” he said. “To see him come out there with live action coming at him, being able to step up and make plays and keep his eyes down the field, he did a really good job as they all did."

*I spoke to one observer who said that there were a few tense moments with the quarterbacks being live, including Watson getting popped hard one time in the red zone and Kelly getting picked up and dumped after one tackle. However, all three quarterbacks looked perfectly healthy as they walked off the field.

*Morris said he the scrimmage stood out for a number of reasons.

"It might have been as good as we've looked in a first scrimmage since I've been here," he said. "When you have that many guys moving in and out, three quarterbacks moving around, zero turnovers -- that's huge. You can win a lot of games not turning the ball over."

*I spoke to one former player in attendance, and he said that Stoudt looked like he was in total control of the offense, Kelly made some plays with his legs and that Watson is “just smooth.”

“I think everybody enjoyed running out there a little bit,” he said. “That was the first time being hit in a long time for some of us. I thought all of the quarterbacks did really well, and the line did a fantastic job. Probably the best job they’ve done all spring. You just have to go out and play and take all of that studying you’ve done and ball out.”