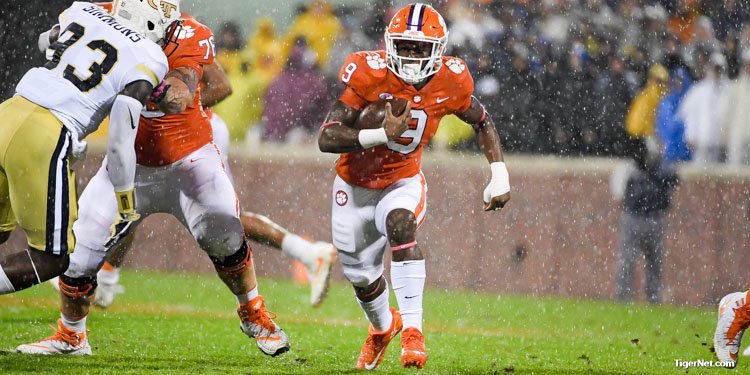 Travis Etienne had 7 carries for 43 yards and a touchdown vs Georgia Tech.

CLEMSON – While Clemson fans have grown accustomed to a high-flying, high-scoring passing offense, this year’s team is using a different modus operandi.

Clemson is averaging over 32 points a game, 219 yards on the ground per game and 226 yard passing. Head coach Dabo Swinney and the coaching staff have said numerous times that they don’t care about style points, they just want to win.

The Tigers are relying on a run-heavy offense and a really good defense to wear the opposition down late in the game, and while that may seem like a change in philosophy from the last few years, co-offensive coordinator Jeff Scott said it’s simply doing whatever it takes to win.

“I think there were a few times that we didn't hook up on down the field and that's just one or two plays,” Scott told the media Monday morning in the Poe Indoor Facility. “If we make the throw and make the catch, then all of a sudden it's a three or four score game, and it's a different position. I think the biggest thing is playing complimentary football. Each game is a unique game in and of itself. Obviously, we want to score as much as we possibly can, but our number one goal is to win the game.”

Complimentary football means not turning the ball over and putting your defense in a bad position, something Scott and Tony Elliott were determined not to do in Saturday’s torrential downpours.

Travis Etienne had 7 carries for 43 yards and a touchdown vs Georgia Tech."

“The way our defense was playing was outstanding, and in those conditions, we wanted to be a little bit smart about throwing the ball over the middle where a tipped ball could be an interception,” Scott said. “We did take some opportunities down the field, and we just didn't hook them up, and that's something we want to be able to improve on, and I think that we will as we go forward. We want to be able to put teams away, but I think we felt pretty comfortable that we were in a good spot there for a majority of the game.”

With Tavien Feaster, Travis Etienne, C.J. Fuller and Adam Choice in the backfield and a quarterback who is still trying to learn the position, Scott said the offense will lean on their strength of running the ball.

“I don't think our philosophy has changed. I think we're doing whatever we have to do to win the game. I do like that we're running the ball better than we have since I've been here,” he said. “We're somewhere in the top-25 in rushing. That's what I told those guys during our pre-game talk - I said, 'Hey, I'm glad that one of our strengths of our team this year is running the ball.' Getting ready to out and play in this type of game, if we're four and five wide and we've got to throw it 55 times then that environment Saturday night would not have been a good situation for us.”

However, in crunch time, if Clemson needs to throw the ball to win the game, Scott isn’t afraid to turn Kelly Bryant and the wide receiver corps loose, but a run-first offense is what Clemson is in 2017.

“I think we have confidence that we can run it when we need to and throw it when we need to,” he said. “I think we've always felt good about our passing game and philosophy and what we're going to do, but I believe that the difference in our offense the last two or three years has been the emergence of our running game. The guys up front are doing a good job. If you run the ball well, you've got a good defense, then the big plays and everything else will take care of itself. I don't think it's a philosophy change as much as it is being who we are so far through the season.”