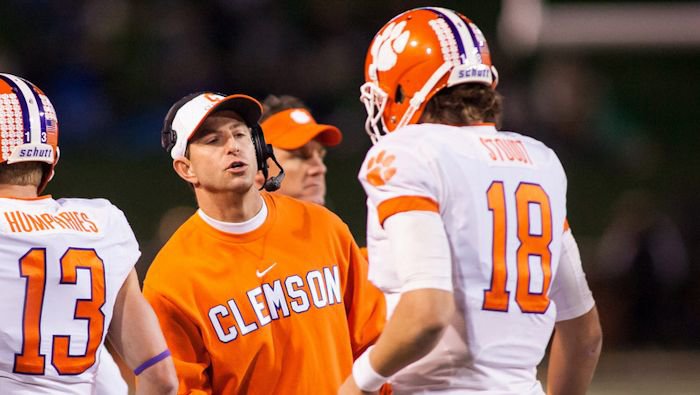 Cole Stoudt
Sr. Quarterback
#18 6-4, 231
Dublin, OH
View Full Profile was slammed to the turf in the second quarter of Thursday’s win over Wake Forest, and the pain in his left shoulder returned. Stoudt bounced to his feet, but immediately began trying to loosen the shoulder to see if he could continue playing.

Stoudt managed to finish the game, however, completing 27-of-42 for 282 yards with three touchdowns and he told TigerNet after the game that he knew he would finish the contest.

“In the second quarter, I reinjured my shoulder. I slammed on it when I ran a little quarterback draw,” Stoudt said. “I knew I could play through the pain because I have before. I just had to fight through it. The o-line did a great job giving me time out there and protecting me.”

Morris said that he was sure Schuessler would have to play.

“We actually warmed Nick up. We told Nick to go ahead and get loose,” Morris said. “I went to Coach Swinney and said that I felt like Nick was fixing to go in and Cole is hurting pretty good. Cole, being the competitor that he is, the fighter, the scratcher - he's going to to take advantage of every opportunity. You've got to love that in a senior that has sold out for you.”

Deshaun Watson
Fr. Quarterback
#4 6-3, 204
Gainesville, GA
View Full Profile would be available if needed Thursday night, but Morris said that Watson wasn’t much of an option.

“We weren't going to put Deshaun in. We went into it with we're going to wait and see,” he said. “We're going to give it another week and let him get healthy and go from there.”

Instead, the Tigers rode the leadership of Stoudt – and a stingy defense – to the win.

“I thought Cole did a really good job managing the game. I know he had a bad ball early and was late on a throw,” Morris said.”I thought we had a chance to pick up a first down that was sitting on the chains and we knew they would be and we were a little late on it. I thought he did a great job especially late in that first half of hitting his check downs and keeping drives alive. The big throw to Artavis Scott

“I thought he did a good job managing the game and he ran the ball well. When we had to have him run the ball, I was pleased. The guy has been playing hurt the last few weeks so it's just a tribute to him and being a senior and battling, scratching and clawing. I'm really proud of him. I was pleased. We missed some balls and he wishes he had a few back on some guys that might have put it away a little earlier but a tribute to him. He did a really good job handling some of the adverse situations of the last month.”