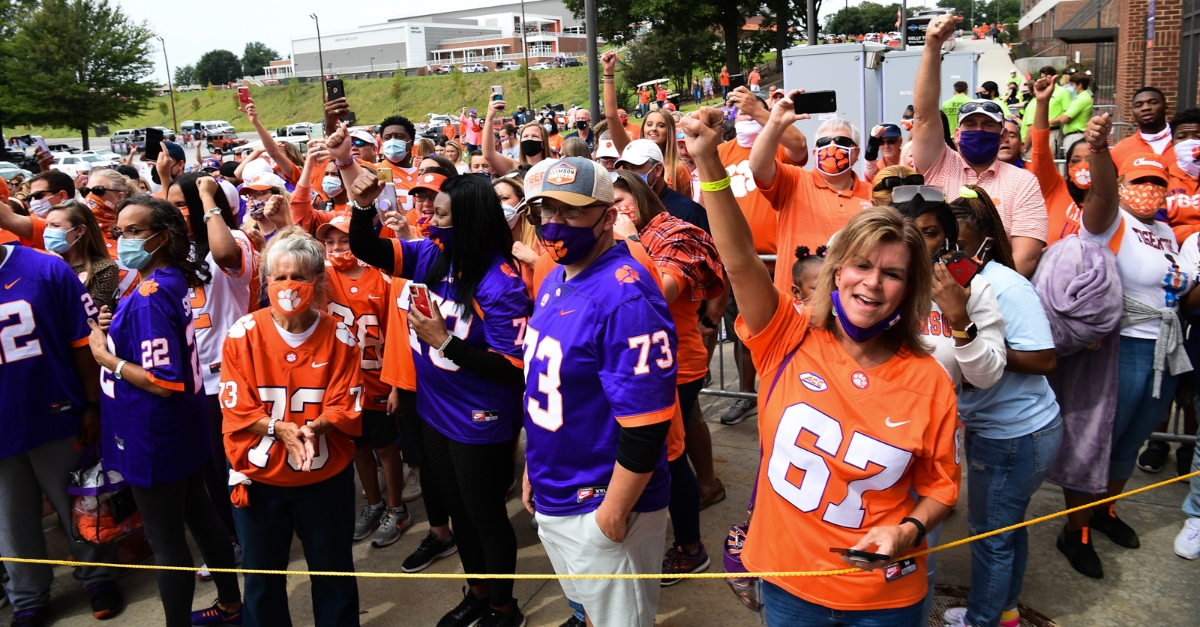 Clemson fans line up before Saturday's game (Photo per ACC).

Thank you Charles Dickens for giving me the words to describe what it felt like to be in Death Valley Saturday afternoon. It was the best of times, and while it wasn’t really the worst of times, it was strange and awkward.

I live in Pendleton, right off the square, and the ride from my house to the stadium is short, except on the days when there is a home football game. Depending on when I leave – I try to be at the stadium at least three hours before kickoff but usually earlier – the drive goes from the usual eight minutes to anywhere from 25 minutes to 45 minutes (and in a few cases, even longer).

This past Saturday, with no recruits on hand so we could take photos, and with sideline access prohibited, there really wasn’t any need to get to the stadium any earlier than 45 minutes before kickoff. The trip from my house didn’t encounter any traffic, and I noticed that those who decided to tailgate were socially distanced and cars were parked far apart. There were no large gatherings to speak of, and people sat in groups of two or three and watched the world go by.

Members of the media sat at least six feet apart, and there weren’t many of us – with interviews held via Zoom and with no sideline access, many chose to simply cover the game from the comfort of their own home. I am not wired that way and faithfully made the trip.

Pregame was, of course, different. There were no recruits, no large group of people on the sidelines cordoned off with ropes, and no gaggle of photographers and assorted media types. When the band began to fill the hill, in blue jeans and orange shirts instead of the usual uniform, it really began to hit home how unusual this season has been.

One form of entertainment – two young females that I assume were students wandered around the stands below the press box for 20 or so minutes, scouting out empty seats. About 30 minutes before first kick they found two that were uninhabited and made the requisite number of selfies and weird faces to post to Instagram before sitting down. They almost made it, but the man who was supposed to sit there showed up and even though they tried to beg, he was having none of it and they were booted from the section.

When the team ran down the hill, the only suspense was in the race between head coach Dabo Swinney and the South Carolina State Trooper, who was running full kit (I think the trooper beat him because he took the best angle).

The crowd was loud for 19,000, and while the game atmosphere wasn’t its normal electric self, it was a football game and it was live and it was in Death Valley. Each stadium has its own soul, that thing that makes it special, and Death Valley is special whenever the faithful congregate to take on the Tigers.

There was a downside – the piped-in crowd noise (which I heard but haven’t confirmed was from the Madden franchise of video games) was annoying and distracting. Like I said, the 19,000 did just fine on their own, and I have yet to find anyone who thought the noise added anything to the game.

As the second half wore on and the fans filed out, the atmosphere of course waned. I tweeted out that it was, for the most part, some of the most boring football I had seen in the Valley in a long time. But I was quickly reminded that it was football, something we were unsure that we would see this season. The empty seats and lack of ambient noise were different, but seeing the joy of Swinney at the top of the hill and the joy on the faces of the players and those in attendance made me realize that football is always a good thing, and it’s always a good thing to see Death Valley on a game day.

It was different, but it was football. And for now, that’s enough.