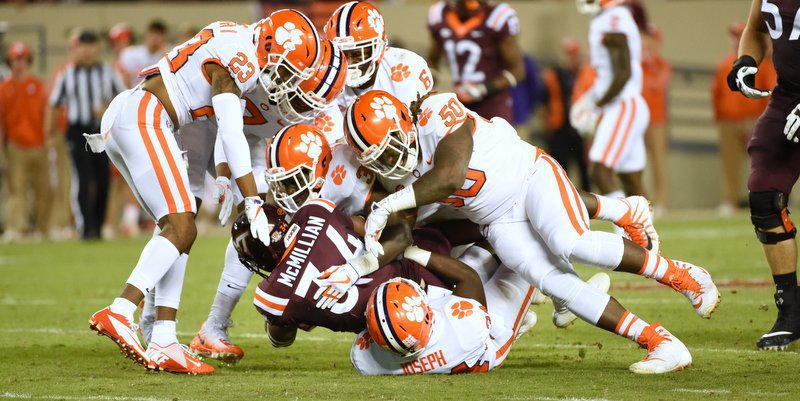 BLACKSBURG, VA – Five minutes before the kickoff between No. 2 Clemson and No. 12 Virginia Tech, Metallica’s Enter Sandman whipped a sold-out Lane Stadium crowd into a frenzy. That turned out to be the highlight of the night for the Hokies, as Sandman brought an orange-colored nightmare.

Clemson dominated from beginning to end in defeating Tech 31-17 Saturday night, improving to 5-0 overall and 3-0 in the ACC. Tech drops to 4-1 and 1-1 in the ACC. Clemson became the first team in the AP era to defeat three Top 15 teams before October 1st.

“First of all, I just want to congratulate Justin (Fuente) and his team," head coach Dabo Swinney said. "They have a heck of a football team. Tonight didn’t go the way they wanted it to, but I have a lot of respect for the way they do things. We played really well in all three phases. It was a complete effort by our team. It was key that we won the turnover margin. Defensively, the effort was tremendous. The story of the game was turnovers and that we controlled the line of scrimmage. Our defense takes a lot of pride in playing for each other.”

Swinney said his program has learned to embrace the spotlight. 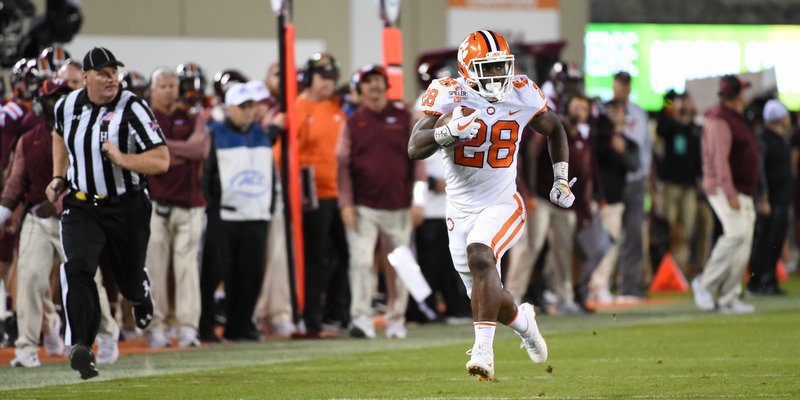 “We don’t make it about that stuff. It shouldn’t have anything to do with how we play," he said. "If you’re a good player, you’re a good player anywhere. Those things shouldn’t matter. We focus on the thing we can control and that’s our preparation. We focus on getting ready and preparing. We don’t get distracted. They really believe in themselves. You have to win in your mind before you can win anywhere else and our guys have the right mindset.”

Clemson won the toss, elected to defer and forced a quick three-and-out on the Hokies’ first possession. A bad punt gave the Tigers good field position at their own 47, and 10 plays later Alex Spence kicked a 23-yard field goal for a 3-0 lead. The Tigers had third-and-goal at the one and brought in the jumbo package of Christian Wilkins and Dexter Lawrence, but Wilkins moved before the snap and a third-down pass to Cain was incomplete, setting up the field goal.

Tech faced a third-and-short on the ensuing possession, but quarterback Josh Jackson was stopped short and the Hokies were forced to punt. Three plays later, Feaster leaked out of the backfield on a third down play, gathered in a pass from Bryant and raced 60 yards untouched into the end zone for a 10-0 lead. It was the second reception of Feaster’s career – he caught a pass on second down for the first.

It was the longest by a Clemson running back since the 2013 Wake Forest game when D.J. Howard had a 75-yard touchdown reception from Tajh Boyd.

Clemson’s offense continued to move the ball but failed to put any more points on the board. A drive deep into Virginia Tech territory ended with a missed 41-yard field goal by Alex Spence after Bryant missed two easy throws, and momentum shifted to the Hokies.

Tech put together its best drive of the night following the missed field goal, marching 52 yards in 10 plays and getting on the board with a 43-yard field goal by Joey Slye. That made it 10-3 with 3:09 to play in the half.

The Tigers, Bryant, and Cain responded in a big way. Bryant hit Cain on a 35-yarder that put the Tigers in Hokie territory, and a few plays later hit Cain for a 20-yarder that placed the ball at the Hokie one. The Tigers went with a two tight end, power formation and C.J. Fuller rumbled in from a yard out for the 17-3 lead with 1:19 to play in the half.

The Hokies put together a potential scoring drive to end the half but missed a 45-yard field goal with two seconds remaining.

The Hokies forced a Clemson three-and-out on the opening series of the second, and Tech had good field position near midfield. That’s when defensive tackle Dexter Lawrence got a big paw on the football and stripped running back Travon McMillian of the ball. It was recovered by Dorian O’Daniel at the Clemson 49.

The Tigers responded with a 10-play, 51-yard drive. Facing a fourth-and-goal at the Tech one, Feaster bullied his way over the left side and into the end zone for the score, giving Clemson a 24-3 lead with 7:12 remaining in the third quarter.

Clemson lost yardage on the ensuing possession, and a short punt turned into a 43-yard punt return to the Clemson two. On the next play, Sean Savoy carried it in for the touchdown and it was 24-10 with 14 minutes left to play in the game.

Clemson was forced into another punt, and the Hokies took over at their own 20 with momentum on their side. It took two plays for that momentum to flip. Jackson’s pass into the flat on the second play was popped into the air, and Dorian O’Daniel picked the ball out of midair and returned it 22 yards for a touchdown. That made it 31-10 with 11:08 to play. It was the second interception return for a touchdown in as many road games for O’Daniel this season.

“That was right after the punt play. We had a bad tackle for loss, had to punt it away, and they got the ball after that touchdown," Swinney said. "That was a huge play. They’re looking for anything to erupt and that settled everything down a little bit.”

The Hokies added a late touchdown that made it 31-17. Clemson returns to action at noon next week in Death Valley against Wake Forest. The Demon Deacons lost a heartbreaker to Florida St. Saturday.