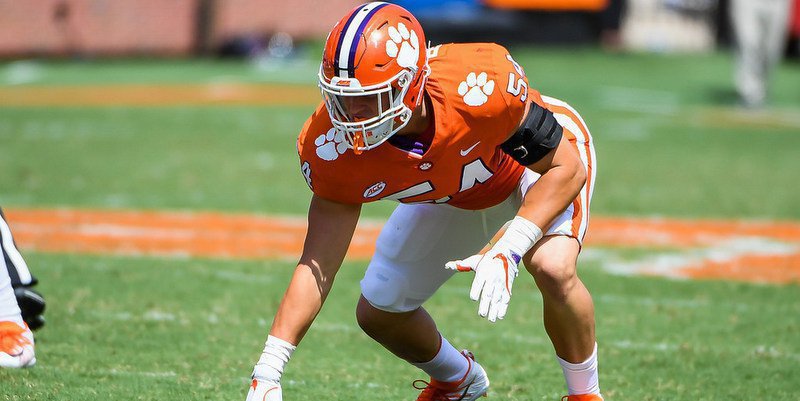 CLEMSON – Freshman defensive end Logan Rudolph will miss the rest of the season, and head coach Dabo Swinney is looking for someone to step in and take up the slack.

Rudolph missed most of his senior season at Northwestern after suffering a torn labrum. He had surgery and went through rehab but it did not heal 100 percent, and Swinney said during fall camp that while Rudolph needed shoulder surgery again, the training staff would put Rudolph in a shoulder harness so he could play.

That ended during Tuesday’s practice when the shoulder popped.

“We lost Logan Rudolph in yesterday’s practice. We were trying to manage and get through already anyway and his shoulder came out again,” Swinney told TigerNet after Wednesday’s practice. “That was a tough thing yesterday for him. He’s going to go ahead and have surgery and we’ll see if we can apply for a redshirt on him. I hate it for him. He was off to a good start, but we need to go ahead and fix that.”

Xavier Kelly and Justin Foster will all see more action with Rudolph out.

“He’s (Kelly) not as far along as we’d like him to be, but he’s a freshman. Same thing with Justin Foster. They’re two freshmen and they’ve got to step up,” he said. “You hate to see guys get hurt, but it’s somebody else’s opportunity to get in. It’s like when Van (Smith) went down, K’Von (Wallace) stepped in and had an opportunity to take advantage of it and he did. Last week, it wasn’t an injury but (Tanner) Muse is out and (Isaiah) Simmons is having to play a lot of safety and did a great job for us. That’s just the way it is. Unfortunately, injuries are a part of it and guys have to step up. Sometimes it’s natural that it takes place and sometimes it’s forced. They’re young players but we’ve got to get them ready.

“Xavier and Justin, that’s it. Chris Register is a pretty solid guy for us right now and he’s on one side, but those two guys have to step up. We can always move Christian (Wilkins) out. We’ve got the opportunity to do that. Those guys inside are doing a good job for us. I thought (Albert) Huggins played his best game last week and hopefully, that’s a good sign to come. Nyles (Pinckney) is coming on and Jabril (Robinson), so we’ve got a good group. We’ve got some flexibility with Christian, but we really need Xavier and Justin to take a step forward and hopefully getting more reps is going to help spur that along.”

Rudolph should be able to get a medical redshirt.

“It’s more on games and not necessarily plays. It’s games played, so he’s within that,” Swinney said. “You hate that. Three games into the season, he qualifies for it. That’s the one silver lining because if it had been three weeks down the road, there is no option for that, so if it was going to happen it was best for it to happen now. I hate it for him. He was going to have to have surgery at some point, but you were hoping he could make it through the season.”

Two other players will miss this weekend’s home game against Boston College.

“(Marcus) Edmond is probably out again. He’s not quite ready,” Swinney said. “D.J. Greenlee is out for sure this week. Actually, he’s doing pretty good though. He’s shown some really good signs so hopefully, he’ll be back next week.”

Swinney said he’s been pleased with the preparations for Boston College.

“Solid practice this week. We’ve got a tough challenge with these guys,” he said. “This is a tough, physical group. This is a team that you’ve got to have the right mindset going in to have a chance to be successful, so that’s what we’ve been working on all week to really create the mindset that we need to compete with these guys.”

How has Tanner Muse responded after being ejected against Louisville?

“Good. It was the right call. The guy was going down and he was going in and trying to finish. You can’t lead with your head. We don’t coach that and he left his feet. It’s something he’s got to learn from.”