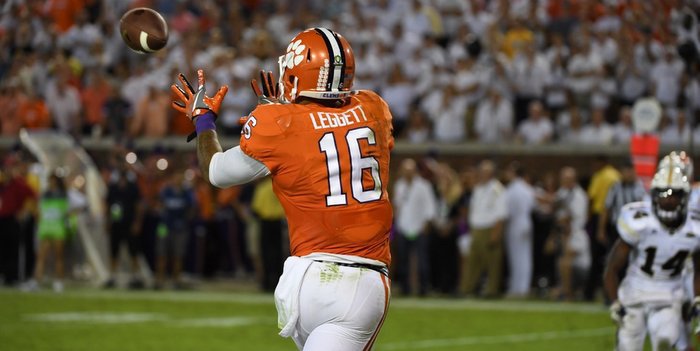 Mike Williams makes a catch early against the Jackets

ATLANTA, GA – Clemson’s offense made enough plays Thursday night to walk out of Georgia Tech’s Bobby Dodd Stadium with a win, but co-offensive coordinator Tony Elliott knows there is still work to do.

A lot of work.

The Tigers rang up 56 plays for 347 total yards and three touchdowns in a good first half, but the offense stumbled and bumbled its way to just three points and 95 total yards in a less-than-stellar second half. There were enough drops, missed assignments and penalties to get Clemson’s attention with a hot Louisville team waiting in the wings.

"Oh man, I tell you what. Obviously in that second half we got some things we want to clean up, but I'm not going to apologize for a win, especially not down here,” Elliott said after the game. “We haven't won here since 2003 and I know the feeling the last few times I came down here but our guys prepared on a short week so very, very proud of how they prepared and came out and performed in the first half. That second half was a little funny. We had seven plays and had a first down but we tried to make too big of a play and ran backwards and got tackled behind the line. We got some things we need to clean up but happy with the win."

The Tigers looked unstoppable early, taking the opening kickoff and marching down the field for a touchdown on nine plays. Clemson scored a touchdown on the third possession after missing a field goal on the second possession of the game. 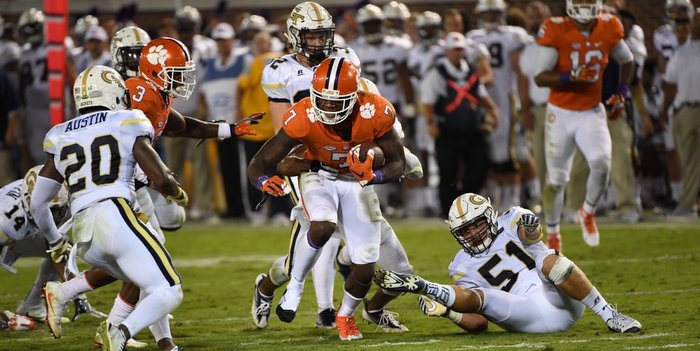 Mike Williams makes a catch early against the Jackets"

"Good rhythm early on and we were able to put some drives together,” Elliott said. “We started back at the end of that Troy game with those three drives to score points and last week, and it was good to get off to a good start this week. 56 plays in the first half is the most we've ran in a half I think. We were spreading the ball around, and tempo was looking good, so very, very good first half."

Quarterback Deshaun Watson was 32-for-48 for 304 yards and two touchdowns.

"Again, I have to watch the tape to see how he played from a technique standpoint but he was our field general out there, and he was directing traffic,” Elliott said. “He did some things in the game we needed him to do. I felt like the protection was good early on, and he was able to sit back there, find the receivers and make the throw."

Running back Wayne Gallman carried the ball 17 times for 59 yards, marking yet another week where the Tigers’ feature back didn’t find room to run. Elliott says the offense has to keep feeding the ball in the hopes it eventually begins to work.

"Keep pounding it. We have two new guys starting out there on the line, we have to build that chemistry. The run game is the toughest to get established,” he said. “So just continuing in practice to get on the same page and trying to get Wayne in to a rhythm. From where I was at watching tape, it looked like he pressed a couple and tried to make too much before as opposed to following behind the center and getting on track then using his eyes when he gets to the next level. As long as we're having fun and have a willingness to figure it out, we're going to make it work."

Tight end Jordan Leggett was able to get involved in the offense for the first time this season, catching four passes for 31 yards and touchdown.

“He's a guy that made a lot of plays for us last year,” Elliott said. “He can create a lot of mismatches in the right situations, and again we planned to target him early and throughout the course of the game they continued to let him make plays."

"He's a year older. He's a year stronger and another year of learning the system,” Elliott said of McCloud. “I think what you're seeing is that he's playing fast. Coming out of high school he was one of the most dynamic players and athletes in the country. It's starting to slow down, and you'll see that explosiveness. They tried playing some cover two on Mike, so we were able to get him the ball and let him make plays."

However, Elliott knows there is plenty of room for improvement.

"I think we have a lot of room to improve,” he said. “The second half was a good opportunity for us to get better. Seven plays and we had two three and outs in the third quarter and we had a first down and ran backwards and didn't get it. We have a lot of things to clean up and the thing is we get to work every day and get better and hopefully start peaking at the right time.

"As a coach, every game you go in to. You know there's going to be mistakes and you just don't want to see the same one occurring over and over again. It seems like one game it's this guy and then another guy doing the same thing in another game. Overall, we got to continue to work and have zoom focus every single play. I think with it clicking better guys are going to be dialed in at practice. We're going in to our division play now and every game counts."