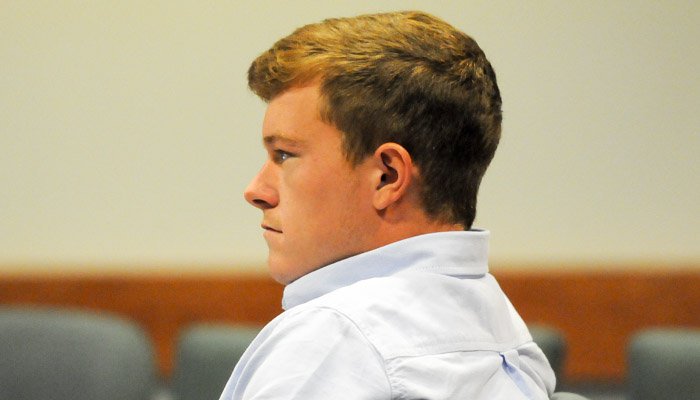 PICKENS – Micah Rogers was found guilty of malicious damage under $2000 but not guilty of grand larceny Thursday afternoon at the Pickens County Courthouse, ending two years of angst and investigations after Clemson’s iconic Howard’s Rock was vandalized and a piece was stolen in the early hours of June 2, 2013.

Rogers, 20, of Pisgah Forest (NC) had been charged with grand larceny and malicious injury to property valued at more than $10,000 for vandalizing Clemson’s Howard’s Rock. Rogers faced up to ten years in prison on each charge. The vandalism took place on June 2, 2013, when Rogers allegedly broke the casing of the pedestal that houses Howard’s Rock and chipped off a large piece of the rock.

The judge sentenced Rogers to essentially no time in jail, but he will miss the upcoming football season.

"The sentence was the maximum sentence on the 30-day charge which was 30 days and a $1000 fine," Assistant Solicitor Baker Cleveland said. "The Judge is not going to make him do that sentence providing he pays a $750 fine after costs and assessments which will be well over $1500 and do 25 days of community service which this office will supervise. In addition to that, the judge is essentially prohibiting him from enjoying football season this year because he required 12 of those 25 days of community service are to be served on Saturdays in September, October, and November."

During Thursday’s proceedings, defense attorney Frank Eppes took an hour and 27 minutes on his closing argument. Eppes attempted to cast reasonable doubt by disputing the testimony of Xavia Winn - the only eyewitness testifying for the prosecution and the star witness during Wednesday’s proceedings. Winn testified that he was with Rogers the night of the alleged vandalism and saw Rogers scale the fence of Death Valley. Winn also stated that he heard glass breaking and that Rogers stood in the middle of the road and danced and said, "I've got what I want. I got a piece of rock."

Eppes said that Winn never saw a hammer or the piece of the stone, and cast doubt on Winn’s credibility by repeatedly referring to Winn’s testimony that stated he stared at the wall outside of Memorial Stadium during the vandalism. Winn said he couldn’t see Rogers take any tools from the truck, didn’t see a piece of the rock and didn’t see Rogers perform the act.

Eppes also said he found it “ridiculous” that Winn would have heard a crime being committed and would have never mentioned it to Rogers or A.J. Gainey, also there the night of the vandalism. Eppes told the jury “the whole of this case revolves around Xavia Winn.”

Eppes also countered that Rogers’ fingerprints weren’t found on the pedestal that houses the rock.

Dabo Swinney
Head Coach
View Full Profile posing with the rock a few days before the vandalism and then a few days after. Eppes said Swinney’s smile was the same in each photo and nothing could take away from Clemson’s love of the rock. He then called the rock itself “common as dirt.”

He also cast aspersion’s at Clemson University Police Department’s investigation of the case, saying he found it incredible that the department didn’t follow up with any construction workers who had the tools and entrance to Death Valley at the time of the incident. Eppes stated that the department leaned on two foremen who stated their workers had nothing to do with the vandalism.

Assistant Solicitor Baker Cleveland then made his closing argument and quoted Winn’s testimony of Rogers saying, “I got what I wanted. I got a piece of the rock.” During his 35-minute closing argument, Cleveland noted that Winn didn’t have the need nor did he gain financially by turning evidence against Rogers. He also delved into the rock’s perceived value by stating, “The Louvre would never sell the Mona Lisa. Does that make it any less valuable?”

Cleveland then noted that Rogers was at the scene at the time of the crime, had the tools to enact the crime and that Winn’s testimony delved perfectly with the events of the evening.

The other point of contention for Eppes was that Clemson never looked at any other suspects or interviewed any of the construction workers that were working in Death Valley.

Rogers gets a hug from his mother Connie after sentencing pic.twitter.com/9U1TjDN9p5

Rogers stands before the judge to receive his sentence pic.twitter.com/i7Fq4BFDiQ