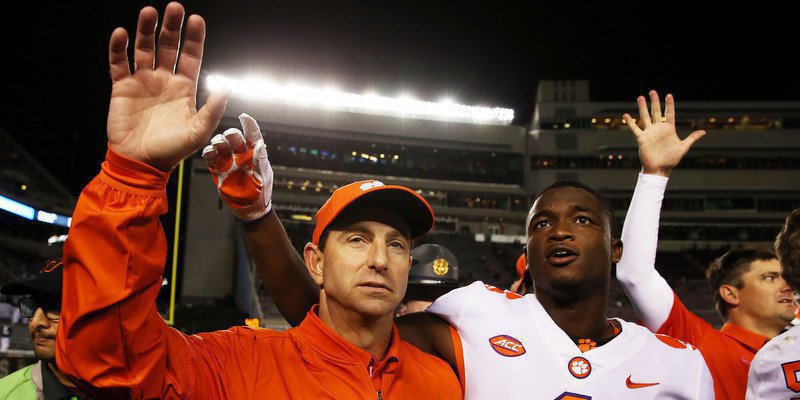 Swinney and Trayvon Mullen after the win over the Hokies (Photo by Peter Casey, USAT)

At two a.m. Sunday morning, we exited the press box at Virginia Tech and made our way back to the media parking lot. The temperature had dropped to a brisk 46 degrees, but the lights inside Lane Stadium still burned bright and the final score of 31-17 remained on the scoreboard.

The long walk back to the car allowed time for reflection, and I thought back to the last time I made that walk, back in 2011 after Clemson defeated Virginia Tech 23-3. The win over the Hokies marked the third straight win, all over ranked teams, making Clemson the first team to ever accomplish such a feat. The previous week against Auburn, head coach Dabo Swinney uttered the phrase, “What they say now?” And, the phrase resonated throughout the entire 2011 season.

I wonder what the 2011 Dabo would say about this program now. The list of accomplishments is impressive, and I’ll post them at the end of the story. One number that is being overlooked, for now, is the fact that Saturday’s win was the 94th for Swinney as Clemson’s coach. Next up on the milestone list is Danny Ford, who sits in second place behind Frank Howard with 96. That’s right, at some point in the next few weeks Swinney will become the second-winningest coach in Clemson history.

Back to Virginia Tech: I love making the trip to Blacksburg. We went up early Friday, and because I like to talk, to anyone that will listen, I spoke with several Tech fans about the game, their campus and their program. They were all extremely complimentary of Clemson, and believe it or not most of them had a rather fatalistic view of the game: no one said they thought the Hokies could pull off the upset.

We walked around campus Friday night, and the closest I came to getting a maybe was from a Hokie graduate who said, “Well, Boston College isn’t that good and they were tied 7-7 with Clemson in the second half last week. Maybe we have a chance.”

Because the weather was so inviting, we walked over to the Alumni Mall and noticed that a few hundred students were already camped out in front of the ESPN College GameDay set. That’s different than what we experienced in Louisville a few weeks ago, where the buzz about the game didn’t trickle down to the students.

I love the campus – we took time to visit the April 16th Memorial (a lovely spot on campus, and the memorial is done right) and it was there that we got a lesson on Hokie stones. Sometimes it’s good to get out and walk another campus and learn about other traditions. As we left campus Friday night, the lights inside Lane were already on and I realized that I couldn’t wait for kickoff.

Now, on to the game: ESPN’s Kirk Herbstreit said at the beginning of the telecast that Virginia Tech is a program that has been searching for a landmark win. After Saturday, they are still searching. As we made our way to the locker room area for postgame interviews, Tech head coach Justin Fuente’s press conference was being broadcast on the stadium speakers. It was evident that he knew what the rest of us knew after the game – Tech is a program on the rise, and they will get that landmark win at some point, but right now there is a gulf between the two programs. Clemson has talent all over the field, while the Hokies have talent in spots. It makes a difference.

I was a little bummed that Tech doesn’t allow the media to go on the sidelines for pregame – each ACC school is different and schools like N.C. State, Virginia Tech, and Wake Forest don’t allow the pregame access. However, the Tech press box is one of the nicest in the ACC, right up there with N.C. State and Wake Forest as having the nicest media facility (Clemson is in the bottom three in the Atlantic, but that’s another story).

I love college football traditions, and I was fired about Enter Sandman. The crowd was into it, the students and the corps of cadets had already made their mark and the stadium was buzzing. The entrance was as good as advertised, but……let Enter Sandman play a little longer. They cut the song off too quick.

*Clemson extended its school-record streak of eight consecutive wins against a top 25 team. It is the longest active streak in the FBS.

*Clemson has three wins over top 25 teams within the first five games for the season for just the second time in history. The only other time it happened was 2011, and that year, the third win was at Virginia Tech.

*The Tigers won their fifth consecutive game against Virginia Tech. Only one of the wins has been at home. Clemson had lost five consecutive games to the Hokies before the recent streak started in 2011.

Clemson won its 12th consecutive game on the opponent’s home field, the longest streak in Clemson history and tied for the second-longest active streak in the nation. Oklahoma has 13 and Alabama also has 12.

*This was Clemson’s 10th consecutive win overall and 19th in the last 20.

*The Tigers have won 18 of their last 19 games played away from home with the only loss in that stretch to Alabama in the National Championship game at the end of the 2015 season.

*Clemson finished the month of September with a 5-0 record, its 13th straight win in the month. It is the first 5-0 September for Clemson since the 2000 season.

*Clemson has won 13 of its last 14 games against teams ranked in the top 25 of at least one poll.

*Clemson is 13-0 at night over the last two years, with seven of the wins coming over top 20 teams. Only three of the 13 wins have been at home.