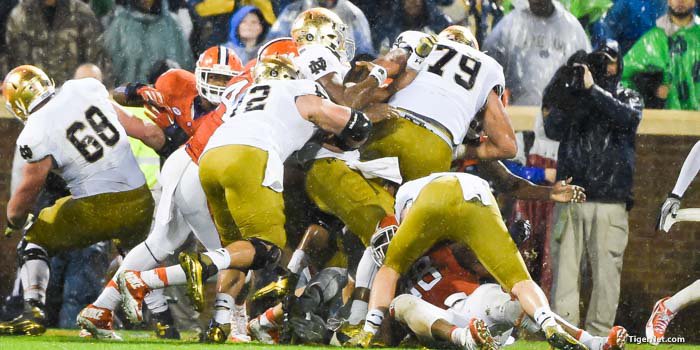 CLEMSON – Clemson’s defense was gashed, and it bent as Notre Dame rallied from a 21-3 deficit to pull within 24-22 with seven seconds remaining, but in the end it didn’t break.

It rose to the occasion when it had to.

Notre Dame tossed a one-yard touchdown pass to close the gap to 24-22 late, but quarterback Deshone Kizer’s two-point conversion run was stopped short of the goal line as No. 11 Clemson escaped with the win over nation’s sixth-ranked team.

Brent Venables
Def. Coordinator / Linebackers
View Full Profile compared it to a heavyweight fight and said it was one for the ages.

“I am really proud of our guys. Their effort was incredible. Hats off to Notre Dame. What a great group of competitors they are,” Venables said. “They’re very talented, and boy, they showed a lot of fight as well, but our guys matched the haymakers, and we made just a few more plays. We played real, real well for a good portion of the game and kind of hung on there at the end and made that play when we absolutely had to. Forced a turnover another time or two. This is a great opportunity for us to coach and teach and correct after a win because there’s plenty of that to do, but love our guys’ fight. Boy, they really battled with them. That was one for the ages right there.”

The Irish scored 19 fourth quarter points, and Clemson’s once formidable lead had turned into a desperate last stop.

“I wish it would have been a lot easier there in that fourth quarter, but heck of a play, and what a call, too, on his part,” Venables said of Notre Dame head coach Brian Kelly’s call. “It worked the last time (on Kizer’s touchdown run), I know, but two-point play, they really hadn’t done a whole lot in the run game all night. I know they had some scrambles there, but to call that — man, Coach Kelly’s a great play-caller and a really great offensive mind, and we got lucky a few times there, too. They say “the luck of the Irish”; well, the luck of the paw because we had some luck there, too.

“They dropped some that hit the in the hands, but that’s part of the game, too. We slipped off a lot of tackles, too, that I don’t always know if we always do if a guy’s not real wet and all that, either. So, I’m not making excuses by any stretch, but you always have to have a little bit of that with things kind of going your way once in a while.”

However, Venables said he didn’t want to get caught up in whether the Tigers didn’t feel like they get enough respect nationally.

“I don’t really get caught up in all of that,” he said. “I just look at the game and what we have to do to win — matchups and staying focused on the things that matter. That stuff doesn’t matter. It was a big game. It was the next game. It is Notre Dame. They’re a very talented team. Our guys knew that we needed to play well to have a chance to win, and for a good part of that game, we played real well and made enough plays there at the end to win it. All that disrespect stuff, I don’t know about that. Clemson has established itself as a big-time program nationally. People respect Clemson. I don’t feel disrespect whatsoever. I know the product that we put out on the field, and proud of it.”

Venables said he thought the Irish began to take the momentum in the fourth quarter.

“I thought somewhere in that fourth quarter, where we missed some tackles and they were running the mesh and crossers, and we didn’t do a good job of coaching them up — just having zone eyes,” he said. “Got out-leveraged a few different times, little bit late on a blitz, and they hit one crosser late where we were hitting the quarterback as he dumped it off on a little shallow. We didn’t do a good job with our leverage in man, the blitz took too long to get there, and he had just enough time. Great poise to see it under duress because we had it dialed up right. But somewhere in that fourth quarter, I just thought we were a little bit fatigued in our technique, and our lines kind of showed a little bit.”

One of the game's top matchups was Clemson cornerback Mackensie Alexander

“I thought Mackensie played really well. I thought he competed well,” he said. “Fuller’s a great player — he had that one screen late. We thought the screens were going to be coming off the sideline, off the bus. We thought the screens would be happening, and they didn’t, and they hit one late on us that they about piped it. He’s strong, he’s a good player, a great competitor, but I thought Mackensie more than held his own.”

Irish running back C.J. Prosise – another national leader – was held to just 50 yards on 15 carries and Venables credited his defensive line.