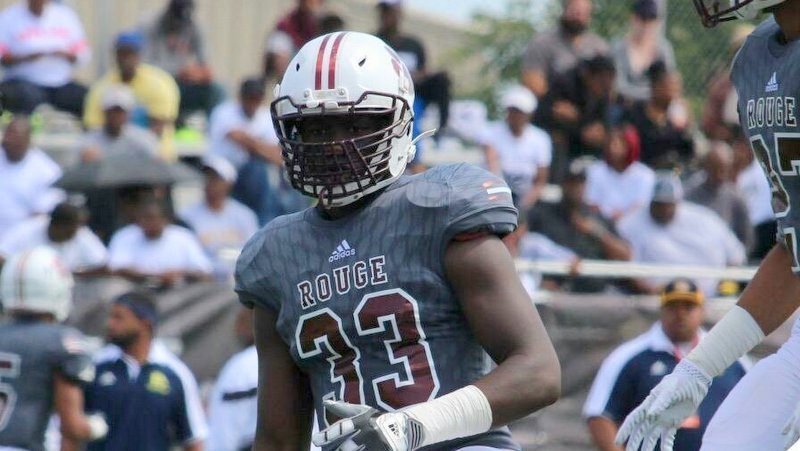 Ruke Orhorhoro played football for the first time last season and recorded 19 sacks, one of the big reasons the 3-star 2019 defensive end out of River Rouge (MI) River Rouge is picking up national offers.

“It was crazy because Clemson doesn’t really recruit up here,” Orhorhoro told TigerNet Monday. “For me to get that offer really means something because Clemson has been one of my dream schools since I was very young. It is really big for me and my recruitment.”

Venables made the offer via phone call after watching Orhorhoro’s film.

“I talk to Coach Venables now and I’ve also talked to Coach (Lemanski) Hall,” he said. “Coach Venables said he doesn't usually recruit guys this far away, but he likes my ability to move and the way my body is and that I am an excellent pass rusher and would fit in well with their defense. They also might be losing a lot of defensive linemen this year and if I come there I could be a key player and make an impact early.”

What makes Clemson a dream school?

“They have one of the highest graduation rates in the ACC, you can get a great education and of course they won the National Championship,” he said. “They have a great coaching staff, and while I haven’t been down there I’ve been doing my research and it seems like a great place.”

Next up for Orhorhoro is a visit to the Clemson campus, but for someone wanting to major in business law, education is important.

“I am planning to visit at some point in the next two weeks. Education is very important to me,” he said. “I want to meet with some advisers and counselors and tutors that tutor players. I also want to see a great environment and feel the vibes of the coaches and be around the players in the locker room. I want the whole feel of it.”

He then said he doesn’t want to wait long before making a decision.

“I plan to commit before July. Michigan, Purdue, Indiana, Oregon, Syracuse and of course Clemson are my top schools right now,” he said. “I am blessed to be in this position. It is a process but for schools to be that far away, it means something that they want to recruit me. I have to look into that and take that into consideration also. Education is really important for me because football doesn't last forever.”

MAN WHAT A DAY! VERY EXCITED AND BLESSED TO HAVE RECEIVED AN OFFER FROM A DREAM SCHOOL OF MINE!!!
CLEMSON UNIVERSITY ??#ALLIN #GOTIGERS pic.twitter.com/wYLBdGS3T4