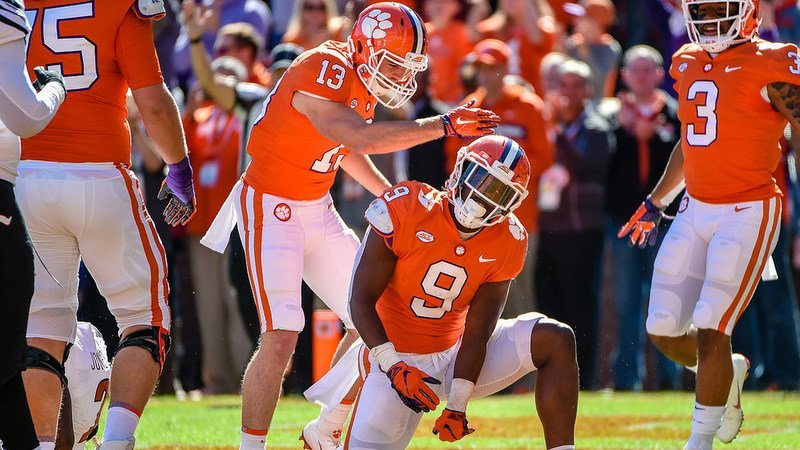 CLEMSON – College coaches are typically low-key when it comes to talking about their team’s success, but co-offensive coordinator Jeff Scott could only shake his head and smile after the Tigers demolished Louisville 77-16 Saturday afternoon.

The numbers are ridiculous - the Tigers had 492 yards rushing on 37 carries, an average of 13.3 yards per attempt. Travis Etienne had 153 yards and a touchdown on eight carries. Lyn-J Dixon had 116 on four carries and Tavien Feaster had 101 on six carries, including a 70-yard touchdown run on the second possession.

Clemson piled up 661 total yards and averaged 11.6 yards per play on just 57 plays. The previous school record for yards per play was 11.2 against Georgia Tech 115 years ago when someone named John Heisman was the coach.

“A special day, really proud of our guys for getting off to a fast start. This week we told our guys, even though we've played well the last few weeks there's still another step we could take,” Scott said. “I think we averaged 13.3 yards per rush which is a Clemson record. Having three backs over a hundred yards was awesome to see, and we had 10 different guys score a touchdown. Nine of those guys were on offense and Isaiah had the pick-six. It's nice being able to score a lot of different ways.

“The last four games I believe we've scored more points in the history of the school over a four-game stretch. I'm really proud of how we're playing and our goal this time of year is to continue to improve and get better each week as we begin this championship phase and I think we did that today.”

Things went so well for the Tigers that the coaches attempted a pass to left tackle Mitch Hyatt. Hyatt now has recorded 3,362 total snaps from scrimmage, a Clemson program record. With that in mind, the Tigers attempted a redzone pass to Hyatt, but the pass went backward for a lateral and Hyatt wound up losing five yards.

“Obviously, not every play is going to go exactly as planned,” Scott said with a laugh. “The biggest thing for Mitch is breaking the all-time play's record for Clemson players, and still has a lot of ball left in the season. We wanted to throw him a bone but didn't have the right look; might have worked later in the game because they weren't rushing as hard towards the end. We went for it. I thought he was going to knock the guy down there for a minute, but we'll have fun with that next week when we watch it on video.”

The Tigers had three players rush for over 100 yards for the second time this season.

“I remember the days when we struggled to get one guy over 100 yards, something that we take for granted now,” Scott said. “This isn't a selfish group. It's very selfless and those guys work every week.”

The task now for the coaches is keeping the players motivated despite the string of blowouts.

“You know, there was a lot of talk about this being a blowout but that was not the talk in our room. We know it's not going to be easy if we go out there and relax,” Scott said. “I'm very proud of our guys. We knew we had some favorable matchups but our guys were engaged from the very beginning and there was no complacency.”

For one game, however, everything seemed to work.

“That was definitely a rare game. It seemed like whatever we called was working and we only had 26 snaps in the first half so we didn't even get through all our openers,” Scott said. “Schemes don't win. It's players making plays that win. Guys were out there executing and it was definitely a lot of fun to have so much success.”