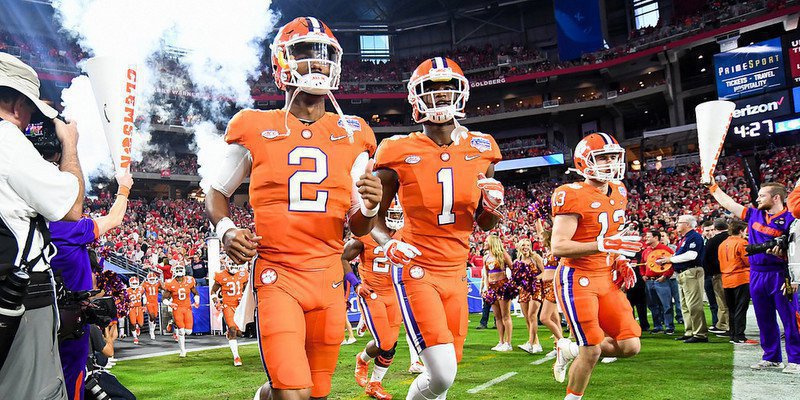 Kelly Bryant (2) hopes to replace Deshaun Watson as the starter

One former college football coach thinks Clemson’s rugged early-season schedule will force head coach Dabo Swinney to find a quarterback in fall camp and stick with him through the first part of the season.

Veteran Kelly Bryant will use the month of August to try and hold off Zerrick Cooper, Hunter Johnson, Tucker Israel and Chase Brice. Former UCLA head coach Rick Neuheisel said Wednesday that Clemson can’t afford to have a quarterback competition that lasts into the season, especially with early games against Auburn, Louisville and Virginia Tech.

“That's a Clemson team that has a whole new identity. Yes, they are the defending national champions, but Deshaun Watson is gone. Mike Williams is gone. Wayne Gallman is gone,” Neuheisel said on Sirius-XM’s Full Ride Wednesday afternoon. “All of the big-time stars of that offense are gone and we expect Kelly Bryant to be the quarterback, but we don't know what week two Clemson is going to look like. If there's ever a time to get them, it's that early in the season, if you're Auburn. It's a huge opportunity for Auburn.

“Clemson has in my estimation four huge games this year - Auburn, Florida State, Louisville and Virginia Tech. They have three of the top-five games in the month of September. They play Auburn and then the very next week they go to Louisville and at Virginia Tech. Before a quarterback can really get his feet wet, three of those five are in the month of September.”

Neuheisel said in today’s college football world, practice reps are limited and Swinney can’t afford to give all the quarterbacks equal reps in fall camp.

“Dabo Swinney cannot afford to have a quarterback competition in the fall. He's got to give a guy the job and see if he can do it. You don't have the ability to give everybody the reps,” he said. “It's the same problem Kevin Sumlin has in College Station. You can't give everybody the reps and let them decide it on the field as we all like to say in the world of fair play because you've got to get somebody ready. These guys don't have enough experience given the amount of time you have the reps you have in fall camp, no preseason games so you've got to go. To me, that's going to be really interesting to watch. Who gets the nod and are they ready?”

Co-host Chris Childers loves what the defending national champs have returning on defense, but questions where the game changers are on offense.

“Defensively, Clemson looks fabulous in their front. They got (Clelin) Ferrell back, (Christian) Wilkins, (Dexter) Lawrence, Austin Bryant coming off the edge, Kendall Joseph is at linebacker still, Dorian O'Daniel,” Childers said. “The front seven should be outstanding. The defense is in great shape. Offensively, they've been so good and so explosive to the point that they made Alabama's defense look pedestrian two years in a row. Deshaun Watson slicing and dicing and carving and doing whatever in the hell he wanted to do against Alabama's defense plus you had a great running game. You had a good offensive line. You had wide receivers for days. Now you look at Clemson's wide receivers as we switch into talking to about them and the games they play that could really define them early in the year. Deon Cain is back, Ray-Ray McCloud, Hunter Renfrow, so you have some proven threats, but there's no Mike Williams type of game breaker at Clemson anymore at wide receiver.”

Childers said he wouldn’t be surprised to see the Tigers struggle out of the gate.

“They have to figure it out early. I wouldn't be shocked, though, if they started 2-3. They could lose to Auburn,” Childers said. “They could lose to Louisville on the road and they could lose to Virginia Tech. If they don't have any sort of semblance of a gel together offense against those teams - Virginia Tech is going to be going through a similar deal but Louisville, we know what their offense is. We know what Lamar Jackson is assuming that he shakes the icks of the last three games, but we saw him be really effective against Clemson's defense last year. They lost that game but he played really well against them.”

Neuheisel said Clemson will be fun to watch in the early-going.

“Remember what it looks like at Louisville when they get a big-time opponent at home,” he said. “To me, this Clemson early season is going to be really, really fascinating to watch.”