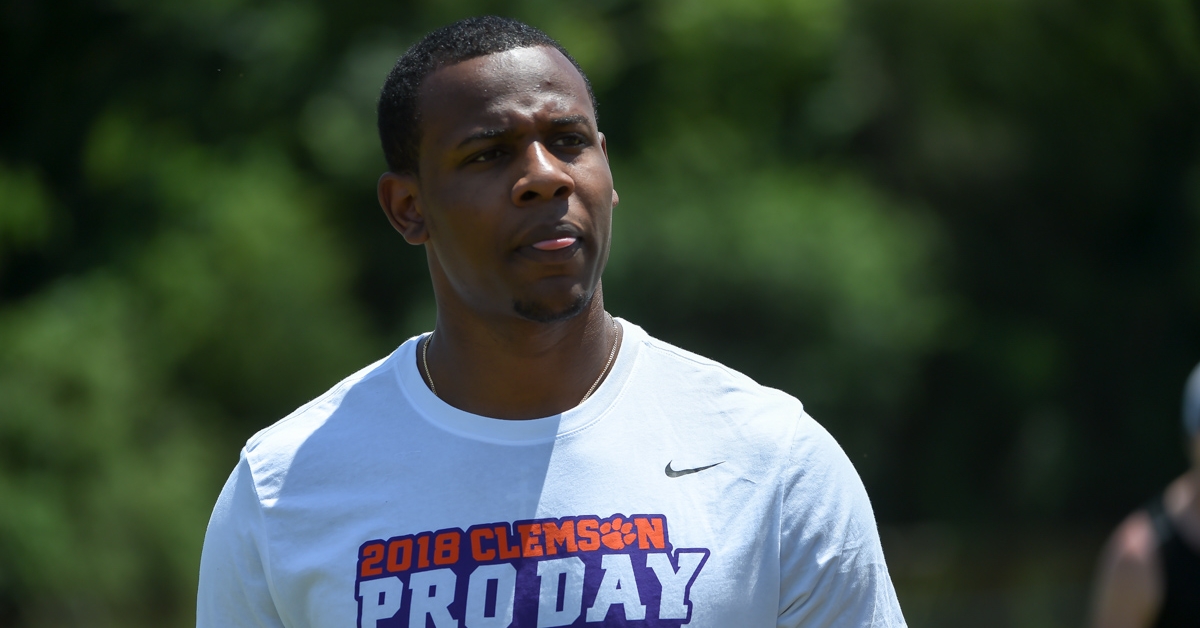 Boston College defensive end Richard Yeargin looked at his phone earlier this week and there was a Cash App request for $1 from former teammate and current Clemson Tiger defensive tackle Nyles Pinckney. The $1 was Yeargin’s entry fee into Death Valley for Saturday night’s Homecoming game.

Yeargin paid the dollar with a smile and told TigerNet that he can’t wait to come back to Clemson and see Death Valley and his former teammates and coaches, even if it is in a different uniform.

A car wreck in June of 2017 fractured the C5 and C7 vertebrae in his neck, and he spent much of the next two years trying to not only live a normal life but feel healthy enough to return to football. Yeargin knew the Clemson coaching staff was in a bind on recruiting numbers and couldn’t give head coach Dabo Swinney a decision early enough in the process to make the decision to stay at Clemson, so he felt moving on was in his best interests.

He’s found a home at Boston College, where he’s registered eight tackles in seven games. However, he has two degrees from Clemson and was a member of two National Championship teams, so Clemson will forever be a part of his life.

“I spent some time last night on the phone with Travis Blanks. I talk with Jeff Davis. I spent some time on FaceTime with Clelin Ferrell,” Yeargin told TigerNet. “All of us and some of the underclassmen who are still there are in a group chat - Chase Brice, Cornell Powell, Nyles Pinckney. Those guys heckle me a little bit. Nyles Pinckney sent me a CashApp one dollar entry fee to get into the game on Saturday. I had to pay him a dollar. It's just little stuff like, just joking around.

“Those are great guys and will always be my brothers but at the end of the day, I'm here with Boston College now and I'm coming into town to compete and play a ballgame and really try to keep the same energy that I've had all season, the same preparation. I'm not doing anything different just because we're playing Clemson. It's always special to get a second opportunity to play football in general. Looking at it through a small lens, it's going to be a great moment to come back to Death Valley and embrace the fans and see Coach Swinney for a quick second post or pregame and be out to there to compete and do what I can to help my team get a win.”

Yeargin said he knows his former teammates respect his decision to move on.

“At the end of the day, when you spend five years somewhere, blood, sweat and tears, highs and lows, and you accomplish so much during that time period together, those type of relationships when they have substance and meaning behind them, they don't just go away just because I make a decision for myself to go somewhere else in a respectable manner,” he said. “At the end of the day, the biggest message here is that it happens everywhere, even at the next level. Guys go to another team but that doesn't mean you lose contact or lose relationships or that there's any bad blood, you just kind of respect each other's decisions and you cheer for one another and root one another on.

“That's been their mentality towards me and I'm very receptive and I appreciate that. It's helped me a lot to have something to reach for every day while I'm here at Boston College. Knowing that not only do I have support here and I have support there, everybody pushes me to get what I want out of this thing and that's just a second opportunity to play football again.”

Saturday will be strange in more ways than one – he will stay with his new team at a hotel in Greenville and then take the bus in Clemson. Instead of stopping at the home tunnel, the bus will continue to the visitor’s tunnel. It’s a place he hasn’t spent much time.

“I have not been in the visiting locker room since my freshman year when they were renovating the West Endzone during the summer,” Yeargin said. “I never really gave that much thought about what that ride will be like. The anticipation of arriving at the stadium and just being able to go out there and embrace the atmosphere while keeping the main thing the main thing which is the task at hand is to win and to go out there and play focused, it's going to be a challenge to balance those things. I'd be lying if I said it wasn't but at the end of the day, I think it's all positive. I don't think that any negative energy or anything like that would come my way that would distort me. I'm just looking forward to soaking up the atmosphere, continuing to be positive and just enjoy the moment.”

When Yeargin first arrived in Boston, his new teammates peppered him with questions about Clemson, about head coach Dabo Swinney and about winning championships. Yeargin answered all of their questions with patience and made sure they knew what it takes to build a winning program.

That’s something he would love to see happen in Boston.

“When I first got here, those questions were a dime a dozen. My response was I enjoyed my time at Clemson,” he said. “Some of the best memories of my life from the time arrived to the time that I departed. Most of the time, you don't want to make it seem like you're some hotshot coming in and showing your rings. That's not really my M.O. When guys asked me about it, I'm upfront and honest. It took a lot of hard work and dedication and it wasn't an overnight process. Clemson went from being a team that lost two or three games a season to we went undefeated last year, so it was a transition in terms of the hard work we had to put in.

“I just try to instill that same energy and bring that same mindset here. We can turn this program into something great. We have a lot of potential here at Boston College and I’m just trying to foster that mindset here that I took with me from Clemson and trying to help everybody around me here continue to get better. Allow that accomplishment and moment in life to catapult this program and give them hope and inspire everybody around me that you can do the same thing here.”

As a new Bostonian, Yeargin has embraced life in the big city.

“Boston is great. It has its things that will drive you here - the water, the seafood, just kind of more city-like activities to do,” he said. “Clemson is more or less playing golf or something like that or hanging out with your buddies, having a low country boil - more outdoorsy, laidback, lowkey kind of fun. I've enjoyed the differences in the two. The biggest thing here at Boston College and in Boston, in general, is that the city has great pride in pro sports. Having the chance to visit Fenway and get out to the Celtics arena, drive-by the New England Patriots stadium - stuff that you don't get a chance to do in Clemson. Clemson football is our pro football, our pro basketball is our everything, so you get six or seven Saturdays out of the year to enjoy sports outside of baseball and stuff like that at Clemson.”