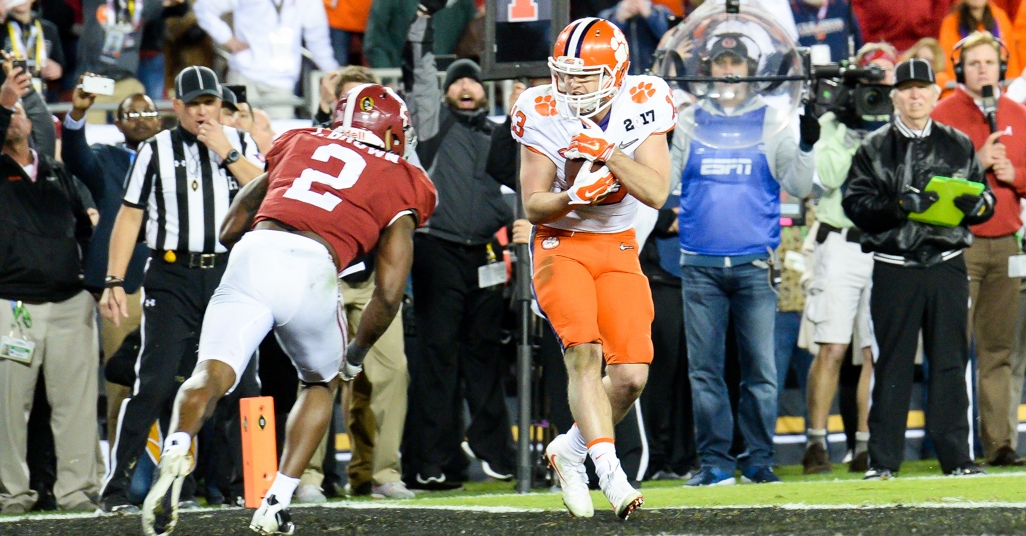 Renfrow hauls in the game-winning TD against Bama

Deshaun Watson took the snap from center Jay Guillermo and rolled right. Wide receiver Hunter Renfrow faked a dig inside and then broke right, turning just as the pass from Watson sailed into his vision. Renfrow grabbed the pass and took a shot from an Alabama defender, but held onto the ball as he fell back into the endzone. It’s a play that will live in Clemson lore.

It’s known as Orange Crush (the play call). It’s also known as 4:13 (Watson and Renfrow’s numbers), and April 13th was celebrated earlier this week. Renfrow sat down with Clemson football SID Ross Taylor to talk about that game and that play and the impact it had on the program and his life.

The current Las Vegas Raiders wide receiver said the moment is bigger than his one play.

“It's unbelievable. And it's not just me, it's everybody that was involved in putting that together, including the people that came before us. It was incredible,” Renfrow said. “It was such a fun night, not because of how it ended, but because of what all went into it. We lost the year before. We had some hurt feelings from that. We struggled against Pitt that year. But it really was how you handle adversity, and that team handled it better than anybody else. And that is what I am so proud of. All of those guys - I could go through every single player and say something I have learned from them. It was a special group.”

Renfrow hauled in 10 passes for 92 yards and two touchdowns but it was Renfrow’s defense that might have had the biggest impact on the game. On the opening drive of the second half, with Alabama leading 14-7, Alabama’s Ryan Anderson stripped Clemson’s Wayne Gallman at the Tigers’ 34-yard line. Anderson then recovered the ball and headed toward the end zone when Renfrow tackled Anderson at the 16-yard line.

Alabama’s following drive stalled and the Clemson defense forced the Crimson Tide to settle for a field goal. If Anderson scores a touchdown on that fumble, then Renfrow’s last-second touchdown only ties the game and sends it to overtime

“I remember we ran our little bubble screen. I watched Alabama play during our bye week - I think I was back home - and I was like this is the best team I've ever seen in my life,” Renfrow said. “They were playing Miss. St. and they had like three defensive touchdowns. And they put up a graphic that said they led the country in defensive touchdowns. I knew we couldn't make mistakes against those guys and let their defense take over the game. So, as he's running towards the endzone, thankfully he looked to his right because if he had looked to his left he would have probably stiff-armed me and ran into the endzone. But thankfully he looked to his right and I was able to chop his legs from underneath him.”

Clemson scored on a one-yard run by Gallman with 4:38 remaining to take a 31-28 lead, but Renfrow wasn’t in the mood to celebrate.

“I remember when we scored with five or so minutes left, everybody was cheering and everybody was kind of giving high-fives,” Renfrow said. “I remember being so locked in, almost mad, that people were cheering. I was like, 'Guys, we have to go win this thing. There is a lot of football left. We can both go score two more times. That is how much time is left.' It was a fun game, but then having a leader like Deshaun come out that is so poised and understand what is about to happen and is able to rally the guys.

“Everybody had a great mindset. I don't think anybody was really thinking about what happened the year before. Even though we talked about it a lot and we thought about it all year, I think when it got to that moment we were more worried about winning that game beating them. We had our chance. We weren't going to cloud our minds with outside thoughts. We were focused on what we had to do to go win it.”

Alabama took a 31-28 lead with 2:07 remaining, but Clemson refused to buckle, and Renfrow’s number was called on the game-winning play.

“I had no clue until they actually called it. Going down the field we had some crazy plays,” he said. “You had Jordan Leggett and a great job by Wayne Gallman catching a pitch from Artavis (Scott) and wiggling through for some extra yards. So many great plays. Mike Williams coming up and making an unbelievable catch. But I never thought that play was going to happen. I thought we were going to kick a field goal and go to overtime. But thankfully, we were able to score.

“That team had a bunch of ballers. They refused to lose.”