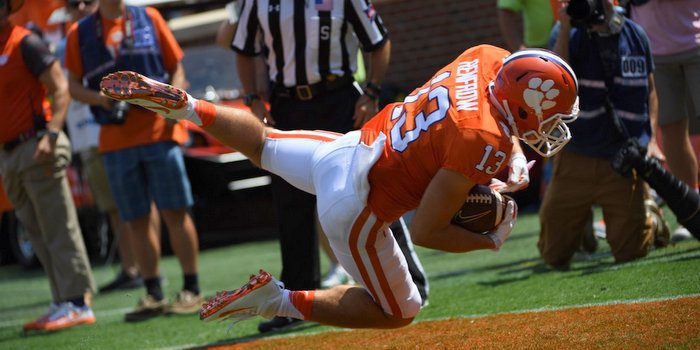 Renfrow injured himself on this catch against Troy

CLEMSON – Injuries are a part of football, but with every missed play, catch and game, Hunter Renfrow quickly realized that the sport he loves so much can be taken away in an instant.

The redshirt sophomore wide receiver broke a bone in his hand on a touchdown catch against Troy, missed the next four games and made his return last Saturday against N.C. State, despite still wearing a brace on his right hand.

Renfrow met with the media Tuesday afternoon and said the injury taught him to value every moment he has out on the football field.

“It was definitely hard to wait. I thought I was good to go a week after it happened, but I had to give it time to heal,” Renfrow said earlier this week. “I got a little different appreciation with not being able to play. I thought I was going to have the whole season and one play can take that away. So, just a different appreciation in not looking at the next game and just look at the game you're playing right now.”

The Myrtle Beach native was able to continue practicing during the injury, but playing against the Wolfpack was a totally different story because he wasn’t able to totally secure the ball after the catch.

“Monday, I get a CAT scan to see if I can get everything off and I think I will be able to. I'm looking forward to that,” Renfrow said. “I had nine good fingers and so I couldn't really tuck it with my right hand, but I could with my left. A few times I did tuck with my right, but I made sure I cradled it and got down. It's just like getting hurt in the backyard and having to play with a hurt hand.”

Renfrow injured himself on this catch against Troy "

During the game, Renfrow got another scare after hitting his head, but he said he wasn’t too concerned about the injury.

“I just hit my head a little bit. I tried to go back in, but he (head trainer Danny Poole) wouldn't let me,” Renfrow said. “I probably had the wrong answers whenever I was sitting there. I probably shouldn't have told him I was feeling a little numb. I definitely won't tell him that again.”

Finally healthy, Renfrow and the entire Clemson team can turn their attention to next week’s trip to Tallahassee to take on Florida State, a lifelong dream of the former walk-on.

“I've never played down there. I've always dreamed about it as a kid, as you can imagine,” he said. “I actually, whenever I was getting ready to come Clemson my senior year, I would be throwing with guys on the field and I would always imagine 3rd and 4 - taking a slant to the house against Florida State at Florida State. That's always been in my mind and something I've always dreamed about. It's going to be a dream come true come Saturday.”

However, if the Tigers are to leave the Sunshine State with a victory, they’ll have to do a better job of taking care of the ball.

“It's nothing we can pinpoint or care too much about,” he said. “We have to just play our way out of it. Kind of like the drop thing, just a little bit more attention to focus. It happens. It's football. We have to take care of the ball a little more and make it more of a focus.”