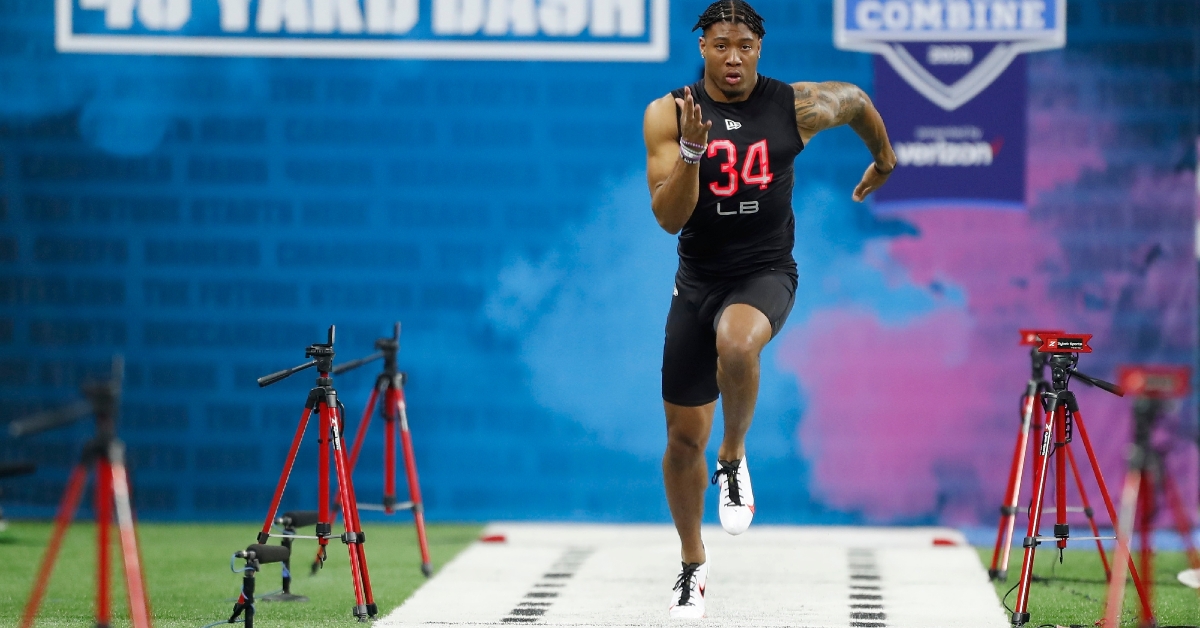 Isaiah Simmons might not get to race Clemson running back Travis Etienne at any point in the near future. In fact, he might have to wait until Etienne runs the 40-yard dash at next year’s NFL Draft Combine to settle the feud.

Etienne has work to do after Simmons posted a blistering 4.39 second time in the 40 Saturday night at the Combine in Indianapolis’ Lucas Oil Stadium.

The pair has raced each other twice, including last spring, and finished in what looked like a dead heat in a tweet posted by Etienne in May. That is amazing considering that Etienne is a 5-10, 210-pound running back while Simmons is a 6-4, 238-pound linebacker.

Simmons set the bar with his scalding time Saturday, which was the second-fastest 40 time for a linebacker at the combine since 2006, behind only Shaquem Griffin, who ran a 4.38 at the 2018 combine. Simmons, however, weighed in 11 pounds heavier and is three inches taller than Griffin was at the combine.

His time was also faster than wide receiver prospects Justin Jefferson of LSU, Jerry Jeudy of Alabama, Jalen Reagor of TCU, Brandon Aiyuk of Arizona, and CeeDee Lamb of Oklahoma.

Simmons was asked about a rematch with Etienne a few days ago and said he can’t wait for it.

"Oh, I knew this was coming,” Simmons said. “The race that’s all over Twitter, Instagram, everywhere, I’ll be honest, he got me on the lean on that one. But after that, we raced in the 40 and I won, but that’s not on tape.

“He might not admit that, but everybody there knows I won that and I won it clear as day. Travis Etienne, when you see this, just know I’m ready for Round 3, the tiebreaker. You know where to find me, you’ve got my number."

Simmons lined up all over the field for the Clemson defense last season and finished with 102 tackles, 16 tackles for loss, eight sacks and three interceptions. He can line up as a safety or as a linebacker and even lined up at defensive end in Brent Venables’ scheme last season, and he compared himself to the venerable Swiss Army knife.

"Oh, I'm going to do everything I did in college,” Simmons said. “Kind of like a Swiss Army knife, because then I'm able to show what I can really do. I wouldn't really say I'm tied down to one position. Coach (Brent) Venables really used me in a special way that most people aren't able to be used.

“The game is evolving, so the name of the game now is stopping tight ends. Something has to be done to stop these Travis Kelces and George Kittles right now."

Simmons had a one-word answer when he was asked what position he plays.

He then said that the NFL game is evolving and needs players with his skill set.

"If you know who George Kittle and Travis Kelce are, then that explains it all,” Simmons said. “Stopping tight ends, playing man on running backs... like the game’s no longer a 250-pound linebacker. It’s more guys that are able to run side to side and are able to cover. It’s just a necessity now with the tight ends and running backs."

Simmons was then asked if there is a player that he models his game after.

"The first name that comes to mind would be Tyrann Mathieu because he bounces around, he can play anywhere in the back seven. I don’t know if I truly have one person you could compare me to just for all the different things I do,” Simmons said.

“Personally I model my game after a couple of people. If I have to go look at film of somebody to get something it would be Von Miller just for pass rush, Jalen Ramsey for man techniques and Tyrann Mathieu just because he plays around everywhere as well. I take bits and pieces from all of them and kind of throw them into my game."

Why did Simmons choose to play at Clemson? Opportunity.

"Coming out of high school, a lot of people wanted me to come in at receiver, some athlete and some just like defense or safety,” he said. “I just knew I had an opportunity at Clemson. That’s one of the main reasons I picked it is just for the opportunity that was presented. Never promised nothing there. I knew the coaches were going to make me the best I could possibly be and I felt going there really helped me flourish."

This trio of simulcams of @isaiahsimmons25 vs. NFL stars he will most likely have to chase down is amazing.

Because, here, they're all chasing HIM down. pic.twitter.com/ndy1AvvKfM