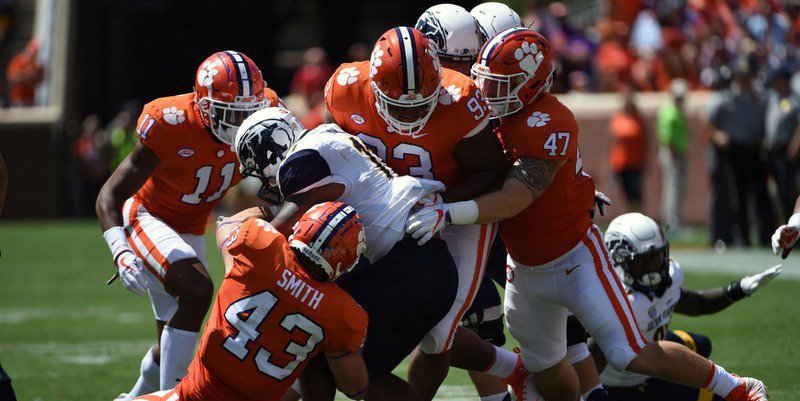 Despite showing a few new formations, Kent St.’s offensive game plan was simple in Saturday’s season opener – milk the clock in between plays, throw as few passes as possible and run repeatedly into the center of Clemson’s defensive line.

The Golden Flashes finished with just 120 total yards of offense, including 119 on the ground and one yard through the air, but Venables was most pleased with the fact that the defense still played well once massive substitutions began.

“I loved watched the energy our guys played with,” Venables said. “I just thought they were relentless and played to a standard today. There was no real let up. We had a lot of guys that played, but there was no real noticeable let up so that was fun to watch as well.”

Clemson’s starting defense held Kent St. to 54 yards and three first downs in the first half, while the backup groups allowed just two first downs and 66 yards in the second half.

“Kent State came out and did a bunch of things that we really had not worked on and our guys just immediately adjusted so it really showed a strong level of intelligence and composure as well, and really played kind of a bottled up game, too.”

Even Venables was surprised that the Golden Flashes didn’t go to the air. 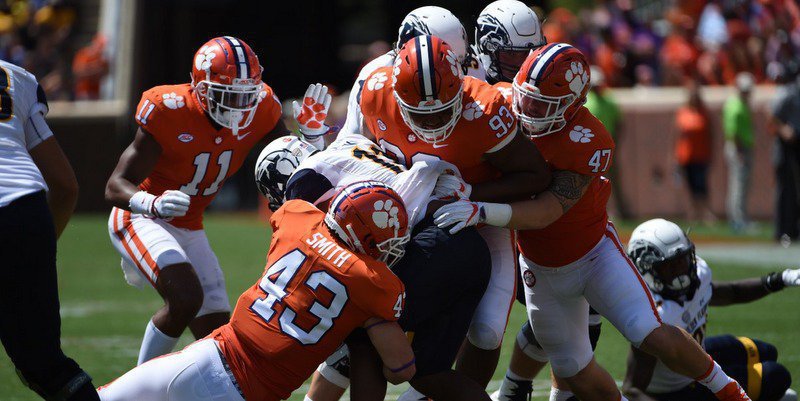 “That was not what we prepared for,” the Clemson coach said. “They must not have watched our Georgia Tech film. It felt kind of like that, but I was very surprised. That was very tough to get a beat on when you are trying to have some coverage calls and things of that nature and then you have triple option so they don’t coincide, but our guys did well adjusting.”

The opposition gets tougher this week when Auburn comes to town. Clemson defeated Auburn 19-13 last year at Auburn. However, Auburn had quarterback issues and failed to find any kind of offensive rhythm.

This time around, Auburn is led by transfer quarterback Jarrett Stidham, who was 14-of-24 for 185 yards and two touchdowns in their 41-7 win over Georgia Southern. The other Tigers also have talent at running back with Kamryn Pettway and Kerryon Johnson.

“It is fixing to get real tough and very challenging this week,” Venables said. “We had a good camp and our offense throws the ball all over the lot, too, but it will be dramatically different moving forward. This was a good starting performance. We are not beating our chest. They have a long season and a conference season they are trying to get ready for too so we have a good perspective on it, but it just wasn’t real sloppy.

“There are plenty of things we will have to correct from it. I saw some missed tackles, missed alignments and things of that nature, but by in large, for as many guys as we played, that was really a good opening performance for us.”