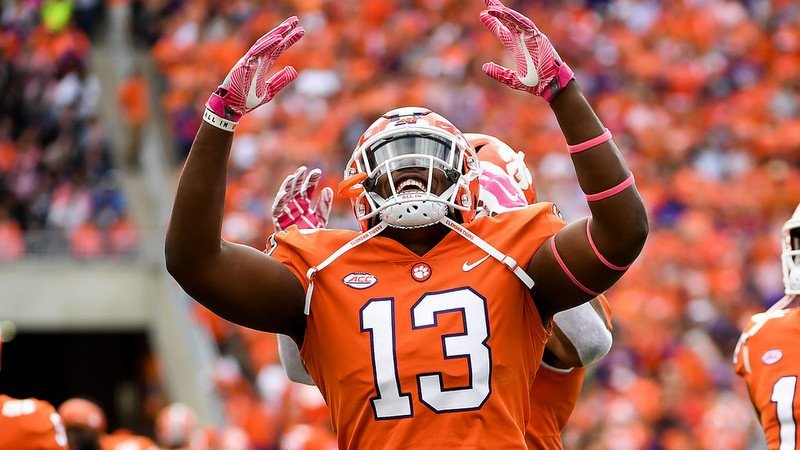 KJ Henry has appeared in four games this season

CLEMSON – New NCAA rules allow players who are using a redshirt year to see action in as many as four games, and two of Clemson’s redshirts candidates made an impact last Saturday in the Tigers 41-7 victory over NC State.

Linebackers Mike Jones Jr. and Jake Venables and defensive end Justin Mascoll each made their season debut in the win. Jones got in on three tackles and Venables tallied a stop as well. Defensive coordinator Brent Venables wasn’t ready for them to play, but late lobbying from the players allowed them to make their Clemson debuts.

Venables said his son Jake was emotional on the sideline.

"He was pumped. He and Mike Jones were both about ready to cry,” Venables said Monday. “Mike Jones must have told me that he loved me thirty times. It was pretty funny. But, yeah, it was good for them to get out there. I really didn't anticipate that, so I didn't prep him at all about what he needed to do. So, during the thirty-second dissertation, Jake's standing there, and his lips started getting blue and purple. I said, 'What is wrong with your lips?' And he goes, 'I'm getting cotton mouth.' It was pretty funny, they couldn't believe it. It was like two kids on Christmas morning.

“I wasn't going to put them in, and then they came up to me asking for a play. The plan was getting other guys in there earlier, but since those two guys are redshirting, their opportunities are not guaranteed, so we took advantage of it. They both went in there and did pretty well."

"Going out on the scout team every day is such a difficult, thankless job. So, to be able to reward them a few games, getting a few reps out there, gives them a little added juice and motivation for the future. The experience is invaluable."

"KJ was somebody that really felt like he could benefit from a redshirt year,” Venables said. “He's the one that pushed that agenda. We weren't against it, we just didn't know how our position was gonna be. We didn't have any intention to redshirt any of them until we had a chance to go out and evaluate them. He's long, athletic, disruptive - but, we have a group right now where we don't have to play him. He's all for it and the benefits of power hour are really going to make a difference for him. We're really excited about KJ and what he has shown so far."

Mascoll is another player that will likely redshirt.

"We feel really good about Justin. He's a very natural pass rusher. Great natural strength,” Venables said. “Again, power hour is going to really benefit him. Justin's going to be a really great player. He's got the right mindset - he's got a motor that won't stop. They can't stop raving about him on the scout team with his effort and toughness every day."

Defensive tackle Darnell Jefferies is another big defender the Tigers hope to redshirt.

"His redshirt year is going well. He's a little bit more under construction and getting his body right,” Venables said. “Strength and conditioning, and the right added weight. Darnell has a great attitude every day and really lets you coach him hard. He takes a lot of pride in his effort and his diligence and studying and knowing what to do - his technique and those types of things. Darnell's done well."