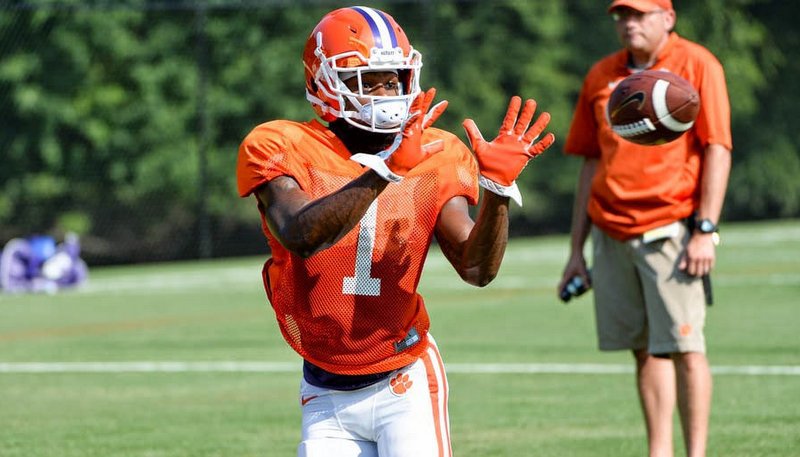 CLEMSON – Bowl practices are usually a time for the players who received a redshirt to get the kind of reps with their position coaches that they don’t get during the season, and head coach Dabo Swinney

With that in mind, we asked Swinney his thoughts on the redshirts. We will run the offense tonight and the defense in the morning.

“Where he was in August - and I said this a couple of days ago - and where he is now is night and day. He is bigger and faster, and everything about him looks better. He got here in early July and just wasn't quite ready mentally and physically had to transform, too. And when you aren't really getting a lot of reps in camp, it's hard to get guys to the next level. He will have a great opportunity this spring. I am really proud of Trevion. He has changed his body and really busted his tail in that power hour. And because of that and because he has paid the price he has a confidence about him.”

“He(Richard) is a wow kind of guy. He is a specimen athletically. He and Cannon. They are different kinds of players, but Cannon is probably going to be one of the more physical guys that have come through here. He has great explosiveness in his hips. Those two guys have really caught everybody's attention all fall. The defensive coaches have really bragged about both of them. Milan is a long athlete. And I went through the power hour numbers today, and his improvement from when he first got here is off the charts in every category. This will be good work for him. We have thrown him in with the varsity some and gotten him some reps in skelly. I think both of those guys will have very productive springs.”

Falcinelli is very athletic and he can bend. He is going to be a very versatile player for us. Tough. And then Hearn - the same thing. He is physical and has great strength. Both of them have great strength and explosiveness in their lower bodies. Then you add in guys like Tyrone Crowder

Maverick Morris
RS Fr. Offensive Line
#69 6-4, 291
Broxton, GA
View Full Profile and the four we have coming in, and that room is going to look totally different in the spring.”

“Man, he is a guy that you couldn't have picked a better name. He really jumped out at us out there today. In fact, we were getting shut out in the PAW drill until he got in there and he just kind of changed that. He was another one that was out of shape when he got here. He wasn't able to come in until late and I don't think he worked like he needed to on his own over the summer. But he has worked his butt off in that power hour. He is strong and fast and he is a natural runner with great vision. He was impressive today. Very impressive. In fact, I told him he had inspired me today and I liked the look in his eye. C.J. is a guy that no one asks me about but he will have a great career here if he stays healthy.”