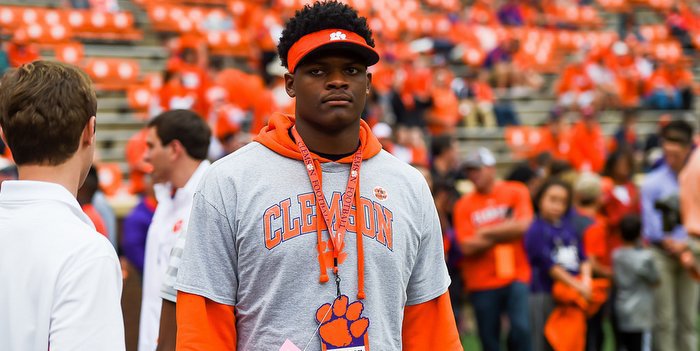 Clemson will attract the nation's top talent to Saturday's primetime matchup against No. 3 Louisville, and even if a recruit can't make it they'll certainly be tuned into the day's marquee matchup.

Several of Clemson's top commits and prospects took time to break down the matchup between the Tigers and the Cardinals and below is how they see the game shaking out.

Stephon Wynn - the No. 31 player in the ESPN Jr300 - will be in attendance Saturday night and he said he expects Death Valley to be "rocking" all night in a win or go home matchup.

Wynn, like many national pundits, said the key for Clemson is limiting the damage on the ground by Heisman frontrunner Lamar Jackson.

"I think the key for Clemson is not letting Lamar Jackson beat you with his feet. Make him beat you passing," Wynn said. "He can throw, but I would much rather him throw the ball when Clemson is pretty good pass rushing and doing pretty good covering instead of letting him run all over people because that's what he's been killing people with all season. I think that's the key thing - not letting him beat them with his feet."

In the end, Wynn said he thinks the Tigers pull out the victory.

"The score? I really don't know. It's going to be exciting depending on the way the defense plays," he said. "Both teams are going to have explosive offensive plays, so it's going to depend on which defense makes the most stops. I've got to go with the hometown team. I think Clemson pulls this one out because they've got more talent than Louisville does all over the field."

*2019 OLB Mikel Jones, Hialeah (FL) Mater Academy Charter: "Louisville is doing pretty good this season. Clemson is still Clemson, though. But I don't think Lamar Jackson can do what he's doing against other teams Clemson's defense. It'll be a good game but I like Clemson to win by two touchdowns."

*2018 CB Benny Sapp, Fort Lauderdale (FL) St. Thomas Aquinas: "My thoughts on the Clemson vs. Louisville game are this: the game most likely comes down to a possession and who is the more disciplined. The thing I've heard from the coaches at Clemson is that Clemson is a very disciplined team. So it's a win for Clemson. I will say Clemson 28-14."

*2017 QB Chase Brice, Loganville (GA) Grayson: "I think Clemson has a great opportunity to get a strong win over Louisville. I believe they're the better team and they just need to play their game. I'd like to see Wayne Gallman have a strong night so they don't have to rely on the pass. Clemson wins 44-31."

*2017 CB A.J. Terrell, Atlanta (GA) Westlake: "We already know the key player for Louisville's offense. If we stop Lamar Jackson on the ground, which I believe we can do by containing him in the pocket and on read options. We have to put a lot of pressure (zone blitz and man blitz) on him so we can get hurries and interceptions. Offensively, for Clemson we have more weapons in the air and on the ground. Our defense has been very solid the past few years. So my prediction would be 31-14 Clemson."

*2017 OL Blake Vinson, Citra (FL) North Marion: "I think Clemson wins 35-14. Dominating the line of scrimmage and winning the turnover battle will play a big part. If the defense contains Lamar Jackson and hits him in the mouth it will be a long night for Louisville."

*2018 OT James Ohonba, Stockbridge (GA) Woodland: "I think it will be a great game with a great atmosphere. I don't know the exact score but the final score margin won't be more than 10."

*2018 LB Eriq Gilyard, Jacksonville (FL) Trinity Christian Academy: "I don't know the exact score, but it will be close. Somewhere between seven and three points with Clemson winning."