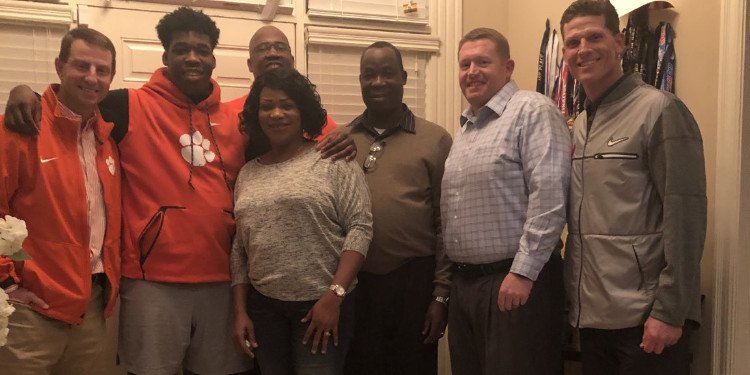 National Signing Day is almost here. The December one that is and Clemson expects all of its committed prospects to put pen to paper.

This year, the early signing period is Dec. 19th-21st. The NCAA’s contact period ends Sunday and restarts Jan. 11 for those wondering when the coaches will come off the road and concentrate completely on the Cotton Bowl.

Trevor Lawrence, Xavier Thomas, Derion Kendrick, and Jackson Carman were four of the nine early enrollees that enrolled last January. The list includes 14 that plan to enroll in January this year.

All of Clemson’s current 24 commitments are expected to sign with the Tigers during the early signing period (Dec. 19 - Dec. 21).

*We detailed the specifics of 5-star quarterback D.J. Uiagalelei’s visit to Clemson last month for the win over South Carolina, and it appears the Tigers have all the momentum. Clemson head coach Dabo Swinney, wide receivers coach and co-offensive coordinator Jeff Scott, co-offensive coordinator and running backs coach Tony Elliott, and quarterbacks coach Brandon Streeter are all in California today to check in on Uiagalelei.

The quartet will stop in to see 5-star receiver Joseph Ngata – one of those early signees and enrollees – before seeing Uiagalelei.

*We detailed this morning the conflicting emotions of offensive line target Cooper Dawson, who was extended a full scholarship offer by Elliott last week. To say that there is an offensive line vacancy in this class is an understatement – Clemson has failed to lock down many of its top targets for the 2019 recruiting cycle despite making the final two or three for many of those prospects. That includes Clay Webb, who is headed to Georgia after having the Tigers in his final two.

That brings us to Will Putnam – the 4-star 2019 offensive guard out of Tampa (FL) Plant has listed a final three of Clemson, Auburn, and Florida State and has taken official visits to all three. Putnam visited Clemson when the Tigers played Duke, and the Clemson coaches visited with Putnam in Tampa last Friday. All three head coaches of the finalists have been in to see him, and Putnam plans to release his decision at some point this week on social media.

His head coach at Plant, Robert Weiner, said Putnam has all of the information he needs and is ready to make a decision.

"There are things he likes about all three of them. He's done his homework. He's the son of an Army colonel and has an organized mom."

Weiner said Putnam saw a lot of positives with Clemson on his visit.

"One thing is the obvious one, a place that you know, just based on recent history, is going to vie for the national championship every single year," Weiner said. "He likes the prospect of that. At Plant, he competed at the highest level and was able to go in the route of striving for a championship in every sport he took. He likes that part.

“He also felt that there's a tremendous family atmosphere there as well where you can find big-time football at the top level and at the same time get a place where you think you're going to be taken of as a human being and where the coaches actually care about you beyond just the football field. He liked the guys as well."

Clemson has gained a lot of momentum with Putnam in recent weeks, and the drama that surrounds both Auburn and FSU has to play a part, making this one too close to call heading into the final few days.

*Another big-time to keep an eye on is Quavaris Crouch. Crouch won’t announce his destination until the Jan. 5 U.S. Army All-American game in San Antonio, Texas, but he told us last month that he wants to make a decision ahead of time to let the coaches know where he’s headed.

The final two for Crouch appear to be Michigan and Clemson, and Michigan’s Jim Harbaugh recently completed an in-home with Crouch. Clemson’s Brent Venables, Danny Pearman, and Swinney visited Crouch last Saturday. I would be shocked if he winds up anywhere but Clemson.

*I will finish with some Shrine Bowl thoughts. The Shrine Bowl week is usually a big week for us but this year is different. The Tigers have just one committed prospect (Greg Williams) playing and really no other prospects. There are a few reasons for that - talent level in the state is down, and the Tigers are recruiting with more of a national scope, bringing in players from as far away as California.