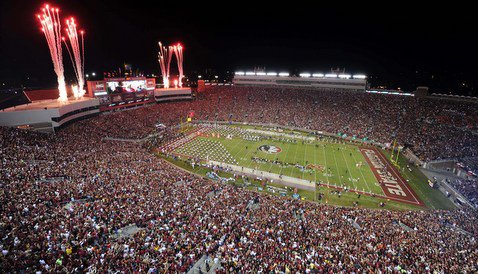 The atmosphere at FSU should be electric on September 20th (Photo by: Melina Vastola)

Every fan, home or away, knows what to expect when they roll into Clemson, South Carolina on a Saturday in the fall – 80,000- plus orange clad fans, the top tailgating equipment you can find and plenty of southern hospitality.

However, they also know that when the ball is spotted all hospitality goes out the window until the clock hits zero in the fourth quarter.

I’ve had the opportunity to travel to all of the stadiums on Clemson’s slate of road games in 2014 and they all have something different to offer Tiger fans. Let’s take a look at where the Clemson Tigers will travel this season and rank the road games based on which one offers the most for the fans.

Again – this isn’t just about the importance of the game or how good the opponent might happen to be. It’s about the trip itself.

Must go: Boston College If you’ve never made the trip to Boston, this is a trip that every Clemson fan needs to make. This will be my third trip to Boston and we still haven’t seen everything there is to see around the Boston area. You can take Duck Tours (travel on land and water in the same vehicle), walk all of the historical downtown Boston area, and head to the original Cheers. If you are a history buff, there’s the USS Constitution, Bunker Hill, as well as many sites from the Revolutionary War. For the sports fanatic, Fenway Park is a must. A trip to Little Italy in downtown Boston is also a must for the best Italian food and pastries around. And, if you’re feeling really adventurous, rent a car and then ride the ferry over to Martha’s Vineyard for the afternoon. We spent the day on the Vineyard two years ago and minus the fact that it was cold and a pizza cost 30 bucks, we had an absolute blast.

Best atmosphere: Georgia Clemson and Georgia’s rivalry goes back further than I’ve been alive and this is the last time the Tigers and Bulldogs will meet for at least the next four years, so both fans need to take advantage of the chance to renew acquaintances. Admittedly, I’ve only been to Sanford Stadium one time and it was for a Georgia-South Carolina match-up and my best friend’s boyfriend at the time got us tickets for the game. We had a blast teaching all of the Georgia students the anti-South Carolina cheers that we know and quickly made friends. This time around, however, Georgia fans might not be so nice. The atmosphere is second to none and tailgating is great, too. If you have a chance to go in on Friday night, the downtown scene will remind you a lot of Clemson – just bigger.

Key game: Florida State If you want to see Clemson play the defending national champions and be present at what might be a GameDay game and a sellout crowd, this is the game for you. As much as Clemson fans hate it, there’s nothing quite like seeing Chief Osceola ride out and plant the spear and there’s nothing quite like hearing a packed Doak Campbell Stadium doing the Tomahawk Chop. This game will most likely determine the winner of the Atlantic Division and the ACC. Here’s a tip for those of you that will make the trip – stay in Thomasville, Georgia – about 45 minutes from Tallahassee – to save yourself a couple hundred bucks.

Weekend getaway: Georgia Tech Just about every Clemson fan has made the trip to Atlanta for some reason, but the city changes when there’s a Yellow Jackets football game. While it’s not the same as Clemson there is some pretty good tailgating at The Varsity and you can get a great hotdog and peach pie while you enjoy the atmosphere. Before and after the game, you can go to the CNN Center, World of Coke, Lenox Square Mall or grab a bite to eat at one of the great restaurants that Atlanta has to offer.

Short trip: Wake Forest There’s not a whole lot that’s exciting about going to Winston-Salem, but, hey, it’s a chance to see the Tigers in person one more time. It’s a relatively short two-and-a-half hour drive up I-85. The facilities are nice and there is good Bar-b-que on the corner just up the street from the stadium. It’s usually easy to get in and out of and then it’s a quick drive home.

So, if you realize that you only have the time and money for one road trip, which one would I suggest you take? Here is my ranking of the trips, with the must-go at the top.

1. Boston College – There’s a lot to do and see and it’s not every day that you can just take a trip to Massachusetts.

2. Florida State – There won’t be a bigger game in the ACC than this one and the Tigers will need all the support they can get.

3. Georgia – There’s history in the Clemson – Georgia rivalry and it doesn’t get much better than going into an SEC stadium and an SEC environment.

4. Georgia Tech – You never know what to expect from a game that involves the Tigers and the Yellow Jackets. At least after it’s over with there’s a lot to do in Atlanta

5. Wake Forest – Nothing exciting about the stadium or the atmosphere, but it’s a Thursday night and short drive.